Nigel arrived safely yesterday on a very early flight. He had to get up at 02h30 to get to Bristol airport in time!! We have decided this very early flight for the future may not be such a good idea. On arrival back at the house, after a few special French pastries which I had bought earlier, he put his head down and slept for nearly 5 hours.
We had a light meal in the evening, sitting outside in the garden in warm late-day sunshine, and then made our way down to Chasseneuil just after 21h00. We were  among the first few people to arrive at the Place de l’Eglise (Church Square), but at 21h30 a Spanish Oompah type band arrived, Los Cassanoialos, and suddenly there were crowds of people everywhere. There was plenty of food and drink around, and by the time the crowd walked down to a local meadow to watch the firework display in the darkness at around 23h00, we estimated there were at least 2,000  people present.
On our return to Church Square after the fireworks, there was a band set up on a stage, Les Christalains, playing Breton and Irish type music, complete with flutes, bagpipes and violins. They were excellent. We decided by 01h00 that fatigue was getting the better of us both and we drove back home with the car registering a temperature of 23 degrees C. (73.4F) ... and the band played on.........!!
The arrival of the band Los Cassanoialos 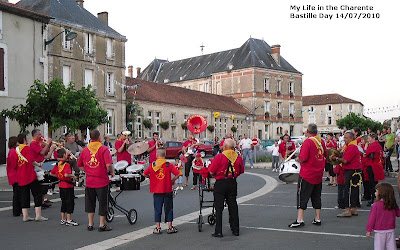 and then the crowds started to arrive 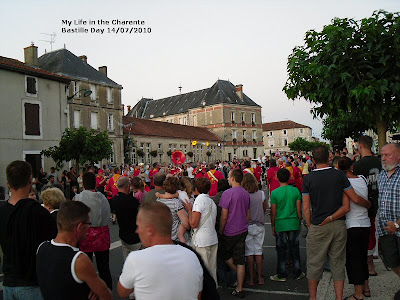 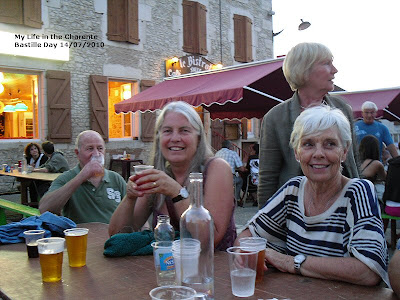 As darkness approached, it was then time to make our way down, along with the band, to the area where the fireworks were to be held 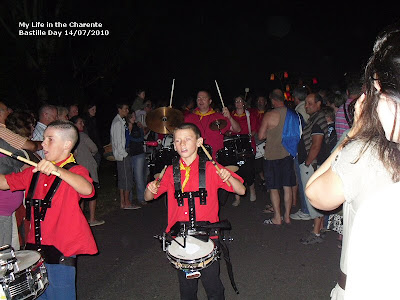 and the children carrying lanterns

and then the fireworks 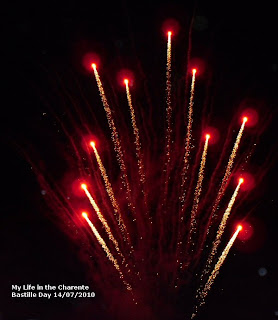 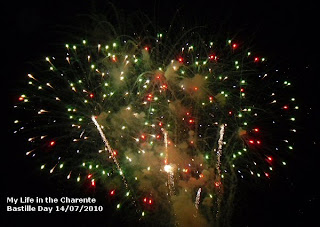 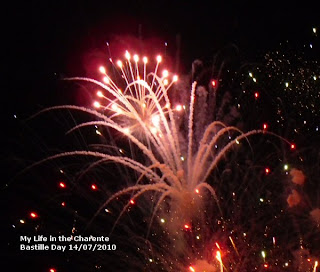 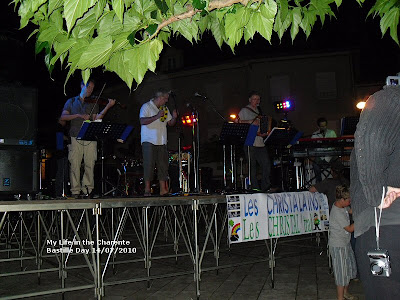 watched over by the ancient church. 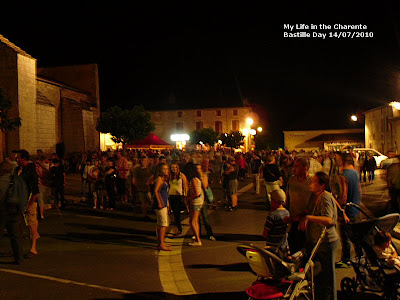 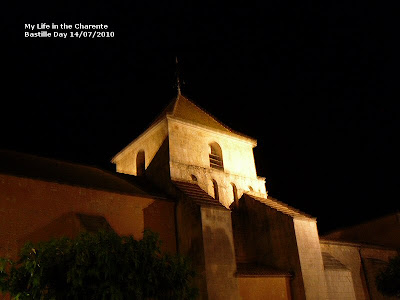 The big climbs in this stage certainly caused a few leadership changes; Cadel Evans (Aus) had a fall at the 6km mark, but after some medical treatment, he was soon back up with the peleton. Armstrong (USA) had a fall just before they got to the steepest part of the penultimate climb. He had four members of his team with him, but had to push quite hard to catch up. The mountain though took its toll, and Armstrong dropped back again and was a minute behind Contador (Esp), Schleck (Lux) and Evans at the top. With 18kms to go, can you believe it Armstrong was brought down yet again!!

The stage win was taken by Andy Schleck, this  also kept him in the white jersey. Second was Samuel Sanchez and third Robert Gesink.

Well done Australia; Cadel Evans, team BMC was at this stage in the yellow jersey. Andy Schleck, team Saxobank was second, and Contador, team Astana was in third. Lance Armstrong was now well and truly out of the reckoning as he had fallen to 39th place, but his ‘Radio Shack’ team mate, Levi Leipheimer (USA) had moved up to eighth position. The team will now do all they can to help him improve his position.

Monday 12 July was a rest Day, and I am sure that many of the riders appreciated the day to sort out the  medical and injury problems that they had acquired with the numerous falls that have occurred on the Tour this year.

Tuesday 13 July stage 9 - Morzine to Saint Jean de Maurienne. Well, the continuing mountain climbs really sorted the positions out again here. The stage winner was French rider Sandy Casar from team FDJ. Andy Schleck and Alberto Contador rode like a pair of demons, especially on the scary long descent down  from Col de la Madeleine, with 32 kms to the finish. I had goose bumps just watching them.

The final stage result put Andy Schleck in both the yellow leader's jersey and the white young rider's jersey.(He only wears yellow - the white jersey gets passed down the young rider list). Contador was second in the overall standings 41 seconds behind. Cadel Evans dropped back to eighteenth position, while Radio Shack rider Levi Leipheimer had moved up to sixth position.
Posted by Diane at 15:20

Labels: Chasseneuil, France, Round and About, Tour de France