Part 12 of our holiday - Visiting Bryce and Zion Canyons

Michael and Mary collected us from the Grand Canyon Lodge at 10 am on 3 July 2016 and we said thanks and farewell to Gaelyn, who was busily back into work mode. It is a 4.5 hour drive to Bryce from the Grand Canyon, so we arrived in the early afternoon. Bryce Canyon is a national park in southwestern Utah and is famous for its unique geology, consisting of a series of horseshoe-shaped amphitheatres, carved from the eastern edge of the Paunsaugunt Plateau. There was plenty of time to have a look around the various named features, and to see the sunset across the canyon. Erosion by  weather has shaped the colourful limestone rock strata into bizarre shapes, including slot canyons, windows, fins, and spires called "hoodoos." Bryce Canyon has the largest collection of them in the world! 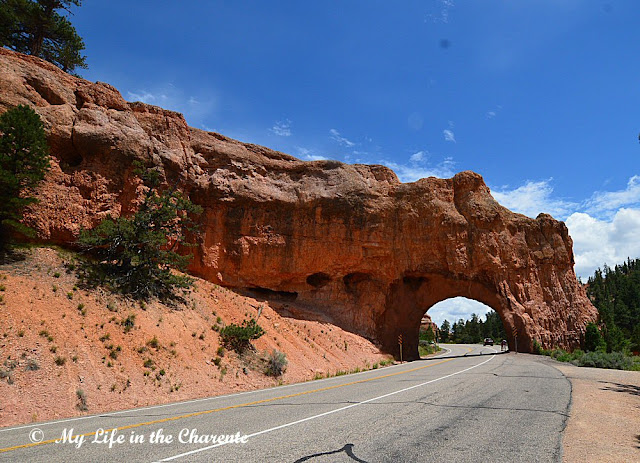 Just before arriving at Bryce, we drove through this natural red arch. 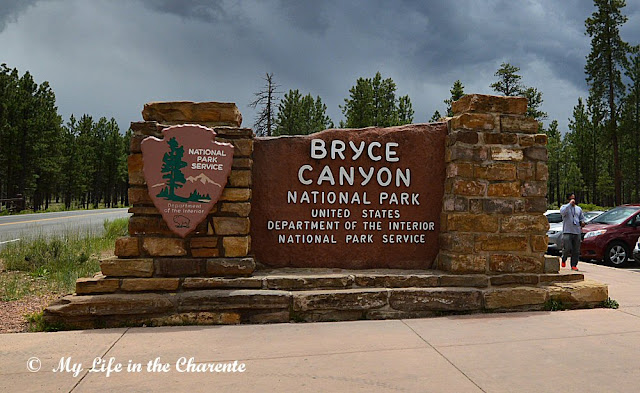 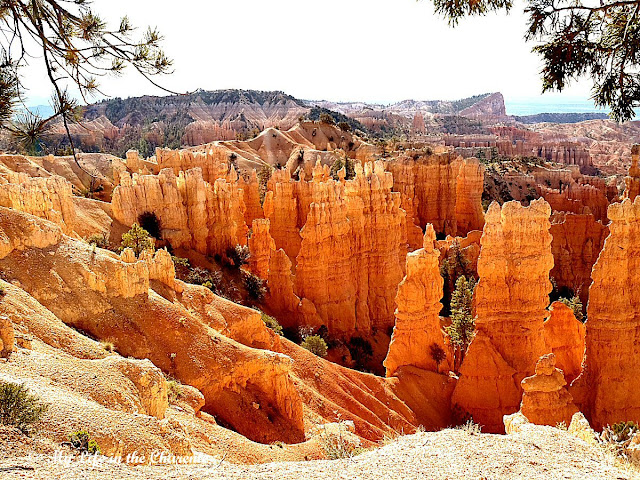 Our first sighting of hoodoos! Their colour seems to change with the light conditions. 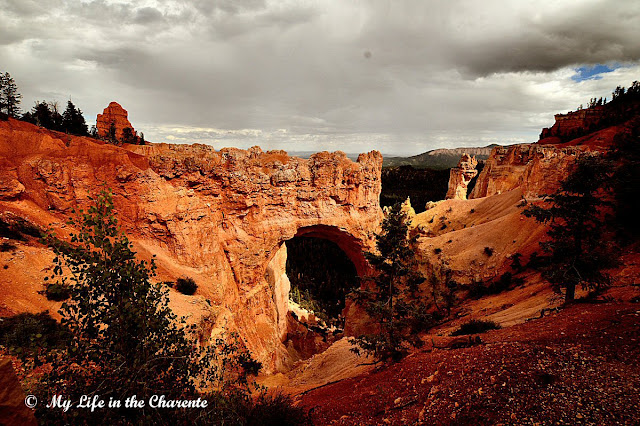 Yet another natural arch with hoodoos over the top.

A panarama shot across the canyon just before sunset. 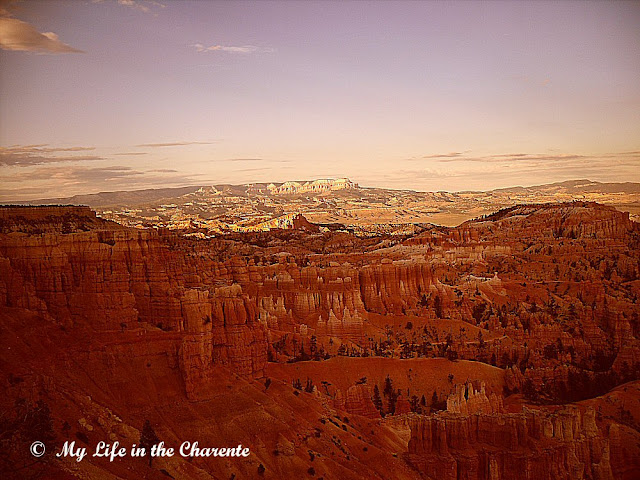 Sunset across the amphitheatre at Sunset Point. 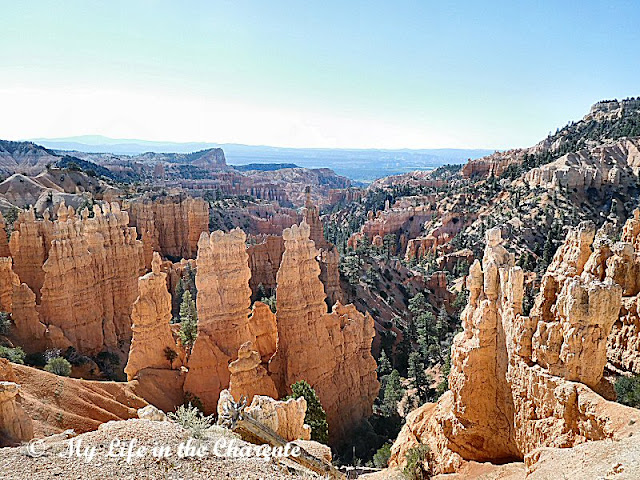 On the opposite side of the Lodge complex, we went on the following morning to Sunrise Point. More hoodoos in a very dramatic landscape! 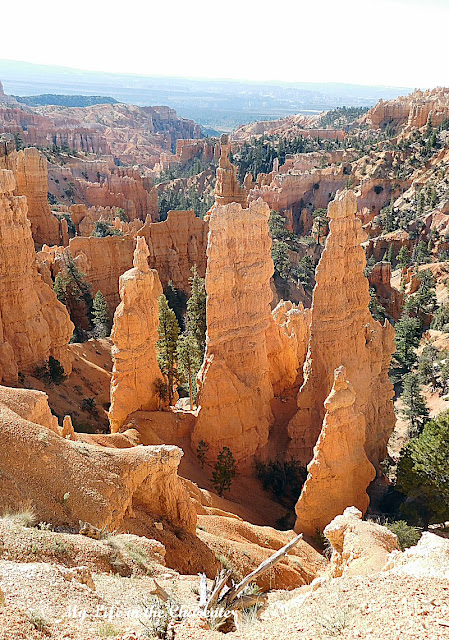 An unending variety of hoodoos. 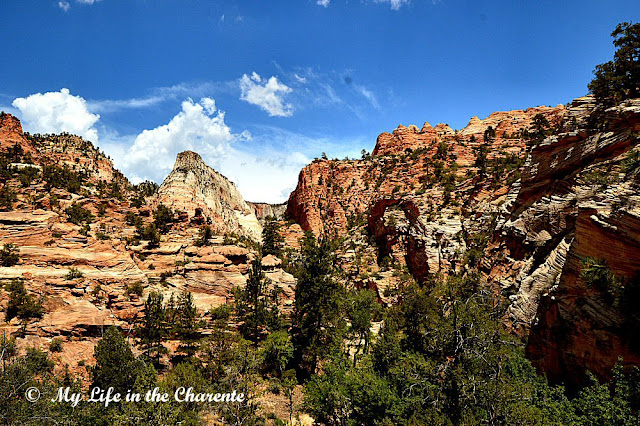 We left Bryce  after viewing the sunrise and having a good breakfast at Ruby's Inn, just outside the park, and then we headed off to drive through Zion National Park.  We were heading home to Mesquite, but a drive through Zion in South West Utah on the way was a "must see". A  completely different landscape from Bryce, it has steep red cliffs, but as you can see above, there are also some natural caves and arches.. 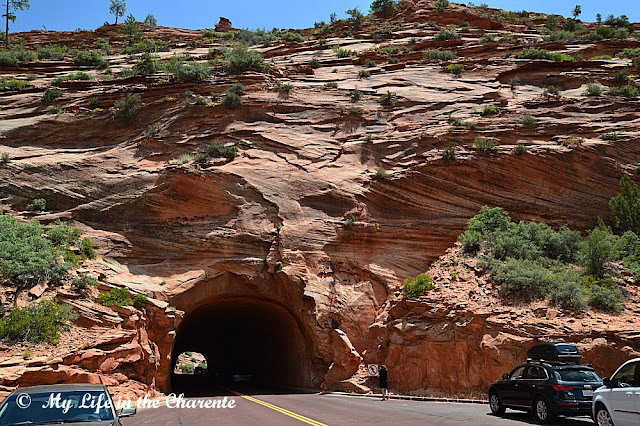 The scenic drive passes right through the primary area of the park and, being the 4th July holiday weekend and a lovely day, there was heavy traffic congestion!  This photo above is of the short tunnel on the scenic drive,  but there is also a long tunnel, completed in 1930, which is  1.8 km (1.1 miles) long and the longest of this type in the U.S.A! 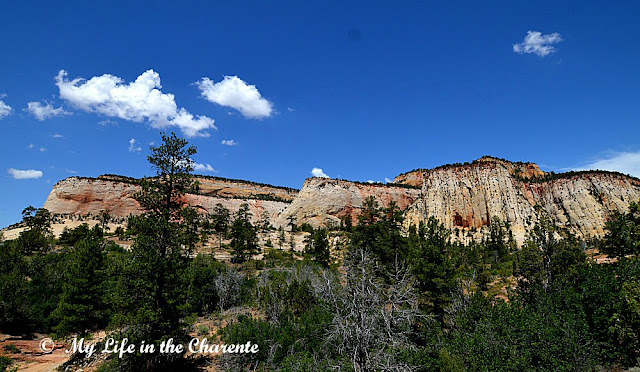 Views taken of Zion landscape from the car.. 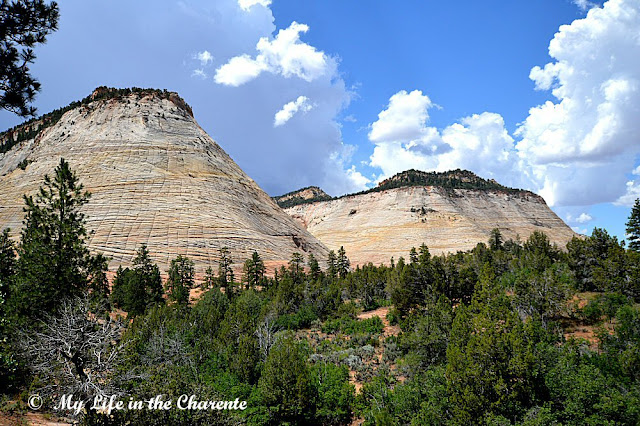 The view as below without us in the way! How did those rectangular patterns in the rock get there? Odd but spectacular! 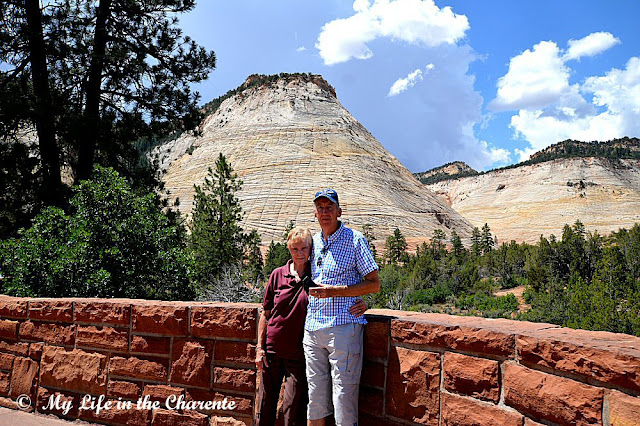 A quick stop, so we could take a photo proving that we had actually been there! 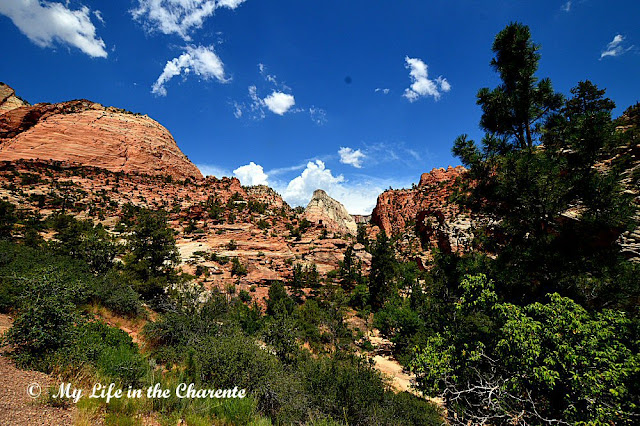 Another view of Zion Canyon before heading back to Mesquite.... 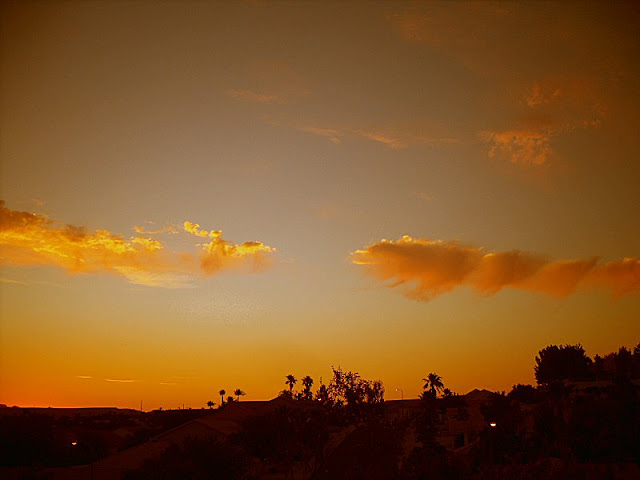 and another amazing sunset back in the desert landscape there.

There is one more part of this holiday which is our last afternoon in Las Vegas before flying home, but this will now have to be postponed, as it is now less than a week before we leave for Southern Africa.  I will be back in March (I hope) with the final USA blog, followed by some very different African subjects. Not forgetting, of course, our visits, in December to Le Mans (more to it than just a motor racing centre!) and Rouen (with its amazing medieval old town)  still waiting for a write up!  One day I might just catch up!!!