The second of two episodes in our visit to Washington D.C. The Smithsonian Air and Space Museum - Part 5 of our holiday.

Boys of all ages dream of visiting the National Air and Space Museum of the Smithsonian Institution, which is certainly one of the most popular of the vast array of museums in the city!  Laid out on two huge floors in the National Mall, it holds the largest collection of historic aircraft and spacecraft in the world. It was established in 1946 as the National Air Museum and opened in 1976.  There is also a separate annex of 71,000m2 (760,000 sq.ft.) in Virginia, opened in 2003, which houses workshops, archives and items too large to fit into the city centre museum, like the B-29 Enola Gay and an Air France Concorde. 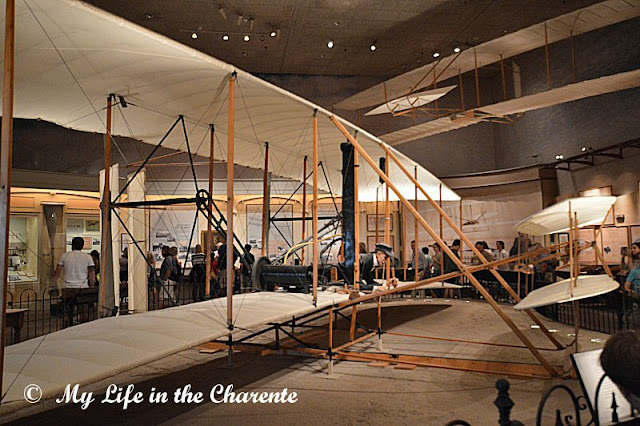 The Wright brothers were pioneers in the design and building of heavier-than-air powered aircraft  and, of course, made the first successful fights in 1903, taking it in turns to pilot their Wright Flyer I. The engine was designed from scratch by their mechanic, and cast in aluminium, to produce 12 horsepower! The  wooden propellers were hand carved, driving the plane to its  longest flight of 260 metres (852 feet) before the plane was flipped over by a wind gust and damaged beyond repair. I think this must be a replica! 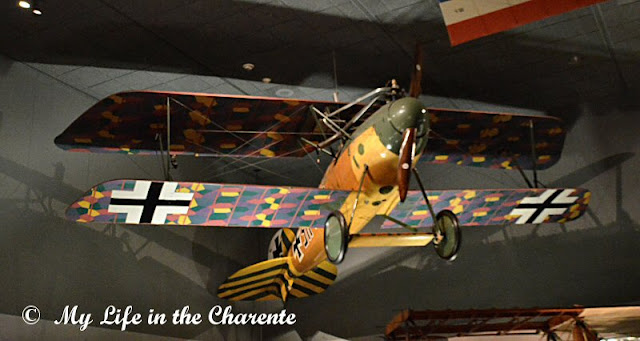 The Albatros D.Va was a  WW1 single-seater fighter aircraft used by the Imperial German Air Service. 1,612 of this version were built before production stopped in early 1918, but the plane continued in operational service until the end of the war.  The earlier models were put into service in November 1916, but many design faults, including wing failures (oops!), caused  Albatros  to respond in 1917 with this final version, which featured a stronger airframe. This modification made the D.Va  heavier,  while failing to cure entirely its structural problems! An uprated Mercedes engine produced 180 horsepower to offset the increased weight of the aircraft, but the celebrated "ace" Manfred von Richthofen was less than complementary about the plane's capabilities! The Fokker D.VII was another, better designed and more successful, WW 1 fighter. Germany produced around 3,300 of these in the 6 months before the War ended. Interestingly, although first powered by a Mercedes engine which didn't perform very well, the Fokker D.VII was to receive a much more powerful engine from a then fledgling company, BMW - they did well later too! The aircraft was so highly regarded, that the Armistice which ended the war in November 1918 specifically required Germany to surrender all surviving examples to the Allies! These survivors saw continued service with many other countries in the years after WW 1. 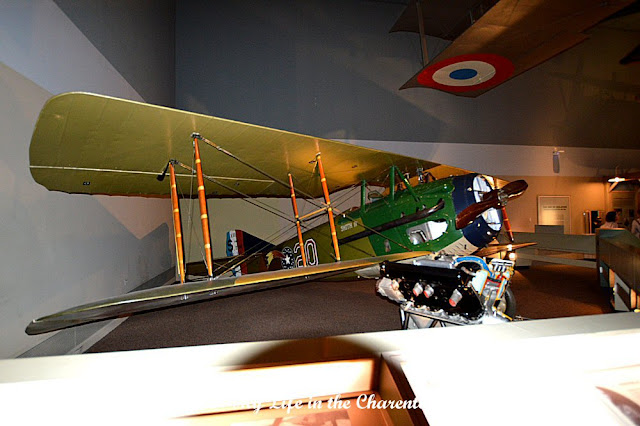 The French SPAD (an acronym for a long French company name!) XIII  first flew in April 1917; over 8,000 were built and its Hispano-Suiza engine was made under licence in many Allied countries including the USA, but it proved to be unreliable at first. As time went by, the serviceability was improved and the plane remained in service until 1923. 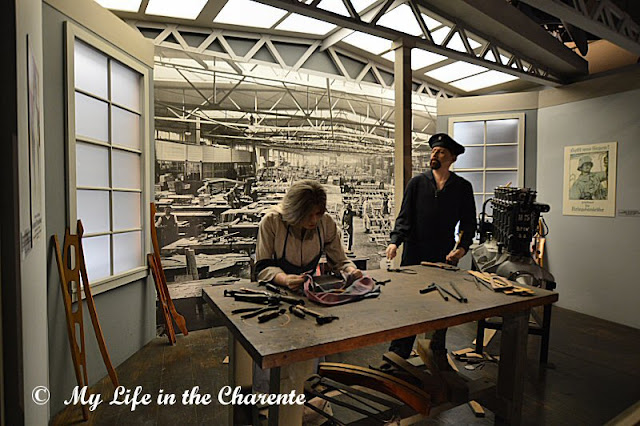 A mock-up of a German aircraft workshop from about 1918.  I think the engine on the right is the BMW 240 horsepower type used to power the Fokker D.VII above. 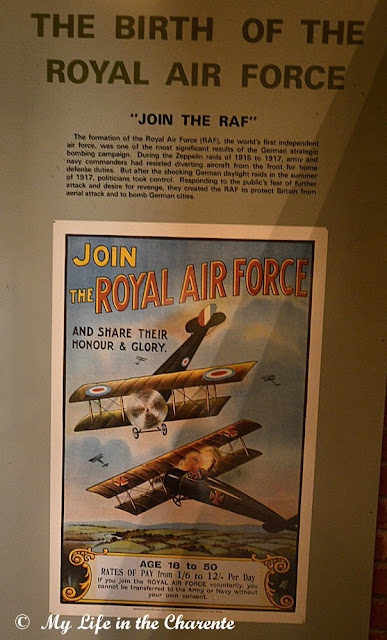 After the shocking daylight air-raid on England by the Germans in 1917, the politicians took control.  Responding to the public fear of further attack and desire for revenge, in 1918 they amalgamated the Royal Flying Corps with the Royal Naval Air Service to create the RAF, which was designed not only to protect Britain from aerial attack but to bomb German cities. 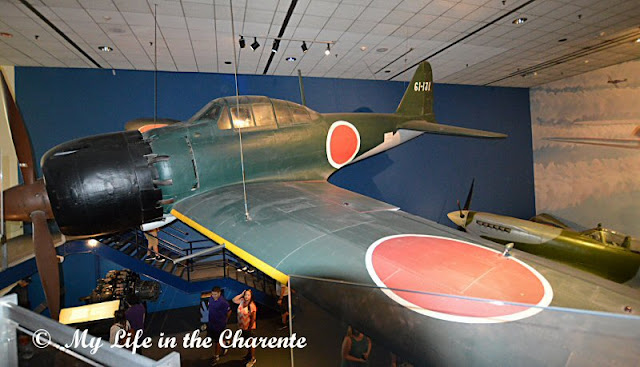 The Mitsubishi A6M5 "Zero" is a long-range fighter aircraft and was operated by the Imperial Japanese Navy. More than 10,000 were built between 1939 and 1945. The A6M5  was usually referred to by its pilots as the "Reisen" (zero fighter), "0" being the last digit of the Imperial year 2600 (1940) when it entered service with the Imperial Navy. Well, I never knew that! The Zero was considered the most capable carrier-based fighter in the world, combining excellent manoeuvrability and very long range. This example is believed to be one of 12 captured by the Americans on a Pacific island in 1944. 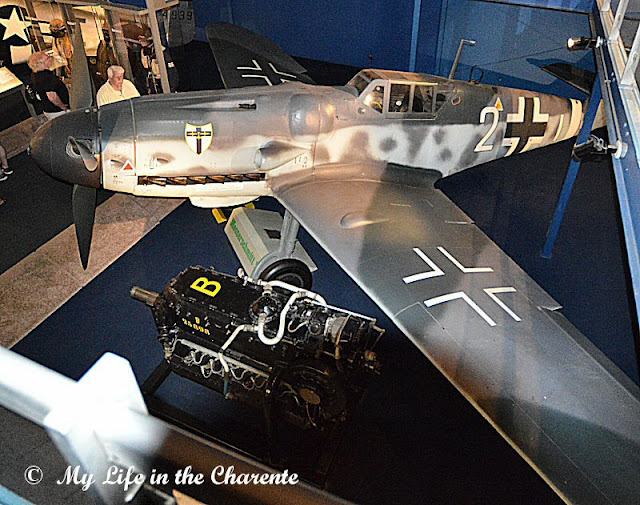 The Messerschmitt Bf 109, Germany's best known WW II single seat fighter aircraft, formed the backbone of the Luftwaffe's fighter force.  The Bf 109's outstanding performance was demonstrated during the 1936 Olympic Games,  but it first saw military service in 1937, when 24 were shipped to Spain during the Spanish civil war. Equipped with a Daimler-Benz inverted "V" engine, more than 21,000 were built. This particular aircraft was captured from a German pilot who deserted in Italy in 1943 and was then shipped to the US for evaluation. 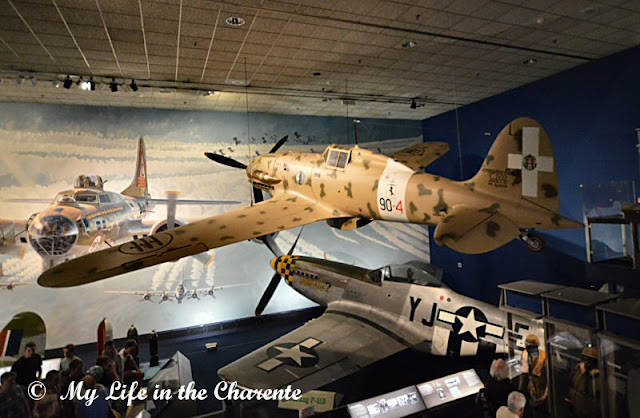 This amazing shot shows a Boeing B-17 almost leaping out of the painting on the back wall!
The top plane is a Macchi C.202 Folgore (Lightning), designed in 1940, almost unknown outside Italy, but  the most effective Italian fighter used in WW II.   It achieved excellence handling and speed by using an imported Daimler-Benz engine!
The plane underneath is the North American Aviation P-51 Mustang. It is a long-range single-seat fighter / fighter-bomber used during WW II, the Korean War and other conflicts until it was withdrawn in 1957.  Designed in only 3 months in 1940, and fitted with Rolls Royce supercharged Merlin engines as an upgrade in 1942, it was supremely fast. it is considered the best fighter of that time and was ordered in large quantities by the USAF. The German V-1, introduced in combat in June 1944 was the world’s first operational cruise missile.  Thousands of pulse-jet powered V-1s, also known as “buzz bombs” were launched against the cities in Britain.  They were slow and inaccurate, and they could be intercepted and shot down. People knew that when they heard the buzzing of the missile stop as its fuel ran out, it was about to drop to the ground and explode, so they sought cover in  underground shelters when they could. The later V-2 was a larger, more formidable vertically launched German rocket, but WW II was almost at an end by the time it was ready for service and thus thankfully little used. 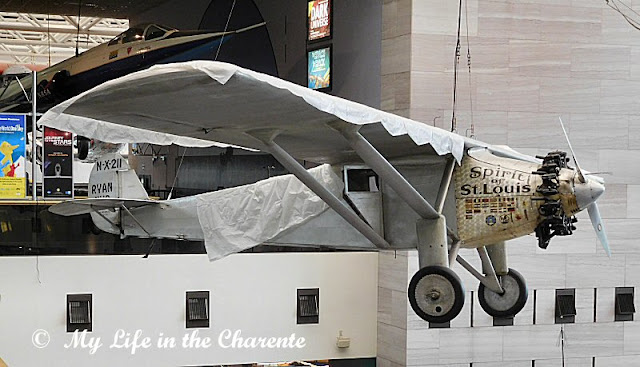 We had problems with so much of Washington being renovated! Here is another example!   Charles Lindbergh completed the first solo nonstop transatlantic flight on May 21, 1927 flying this Ryan Airlines NYP named "Spirit of St. Louis" the 5,810km (3610 miles) between New York and Le Bourget airport near Paris in 33 hours 30 minutes. Lindbergh became a national hero and won a $25,000 prize offered by a New York hotelier. He later gifted the aircraft to this museum. 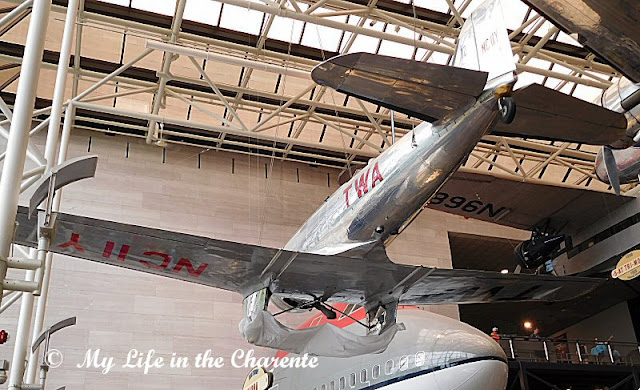 The Northrop Alpha was an American single-engine, all-metal,   fast mail/passenger transport aircraft used in the first years 1930s.  The Alpha entered service with Transcontinental and; Western Air (the future airline TWA - now defunct!) making its inaugural flight on April 20, 1931. The trip from San Francisco to New York, for example, required 13 stops (wow!) and took just over 23 hours. TWA operated 14 aircraft until 1935, flying routes with stops all over the USA. 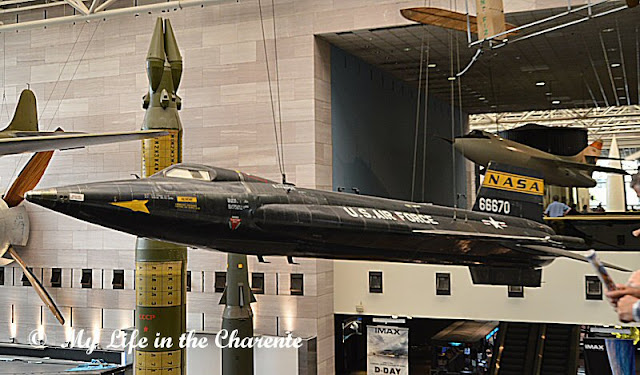 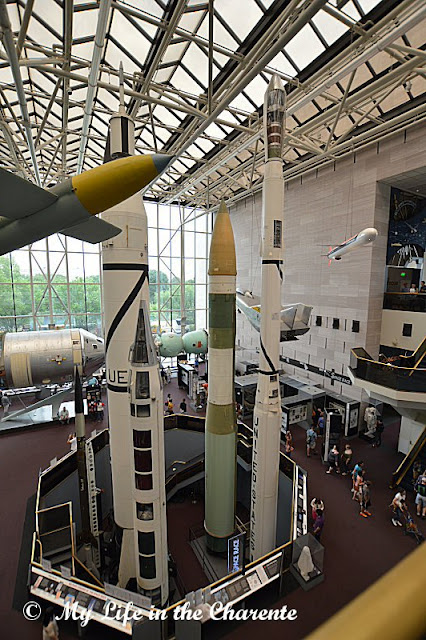 More US rockets! Left –  the Minuteman III, a missile prepared for training. Centre – Aerobee 150 was first flown in 1955.  Right - Scout-D, which appeared in 1972, was a low cost  launch vehicle for boosting small payloads into low earth orbit. Various models used from 1960 to 1994. You can judge their height by looking at the size of the visitors walking about! 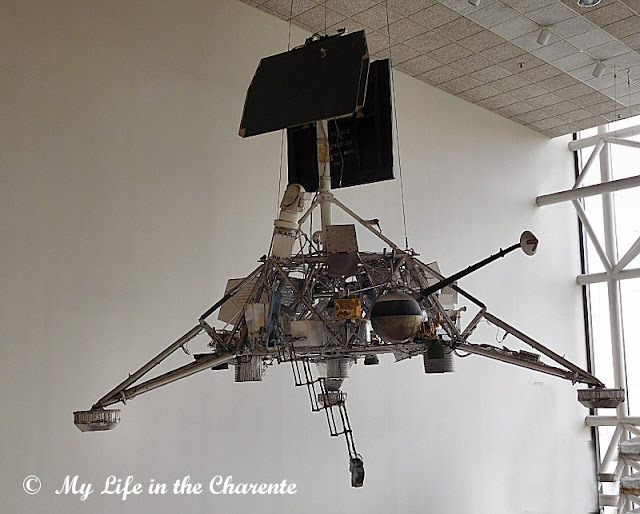 Surveyor was a US project to develop basic techniques for soft landing on the moon to survey for suitable landing sites. Of the 7 launched from 1966 to 1968, five landed successfully and transmitted pictures, sampled lunar soil and performed chemical analyses.   You will remember that the first manned moon landing was in July 1969.

Well, that concludes my two photo galleries of sights we managed to see during our 3 days in DC. If you like museums and memorabilia, you'll certainly have an almost endless supply places to go, but do plan the trip and make sure you have enough time to see what you want to see!

Also see my daily diary HERE
and My Life Before Charente (updated 09 April 2016)  I will get back to this eventually!