The first of two episodes in a too-short visit to Washington DC - Part 4 of our holiday.

Our friend very kindly lent us his car and we drove south from Delaware on the I-95 to the nearby Baltimore Airport, which has a massive multi-storey car park offering easy parking at reasonable rates. The BWI (standing for Baltimore-Washington International, in case you were wondering!) airport has its own dedicated rail station and we caught the train to Washington, as parking in central Washington  was said to be next to impossible to find, and expensive if you did find it! 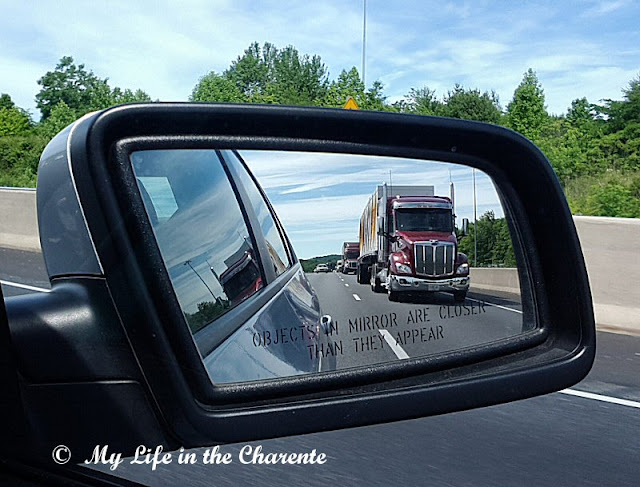 On the way, we discovered that American inter-state highways  can be very scary for we country folk! To have  massive trucks, which travel at the same speed as the cars, bearing down on us  at up to 110 kph (70 mph) or more  was a nerve-wracking experience until we became more used to it. Overtaking on both sides seems to be permitted, too, so eyes-in-back-of-head are useful! The warning note stencilled on the mirror is very necessary! 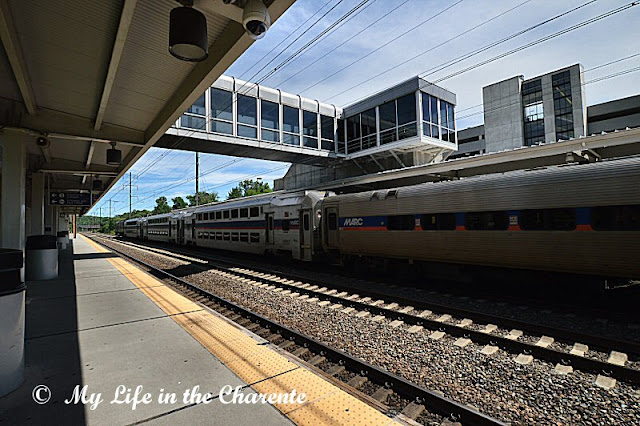 Our MARC train at the station. The national service, Amtrak has very high fares, just like the UK trains! There is however another district train service (MARC) which offers sensible prices, about which our friend tipped us off. We got TWO return tickets on this train for the 45 minute trip to Washington's Union station at the bargain price of $14!!

Washington is a city jam-packed with spectacular museums, memorials and monuments; they are scattered everywhere, so it is difficult to visit them all in a short time!  On arrival, we soon discovered that the hop-on hop-off bus services (there are several available) give one a good impression of where everything is, and of course, you can break your trip to get a closer look at those sights which interest you! One could spend weeks visiting all there is to see and in hindsight we could have stayed a lot longer! However, we tried to fit in as much as possible in the three days we had, but we really only scratched the surface! Here are some views....... in no particular order, or importance! 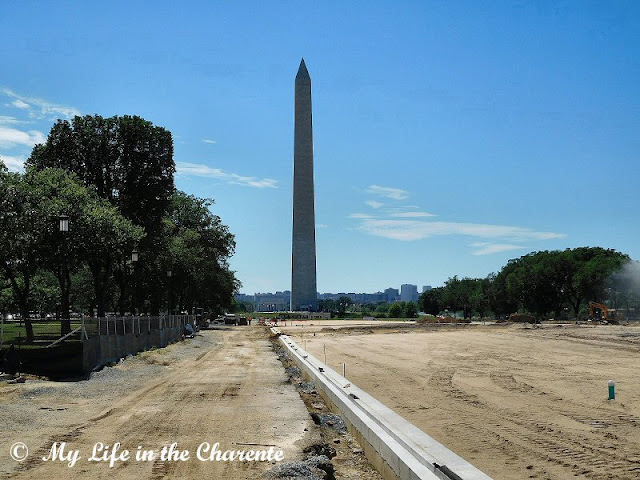 The National Mall with Washington Monument - under construction! No grass to be seen and temporary fencing everywhere! What a disappointment for tourists; how the authorities could do this in the high tourist season and why they didn't do it in phases so visitors could access some of it at least, is hard to believe!! Tip: stay away from Washington until summer 2017 by which time the work should be finished! 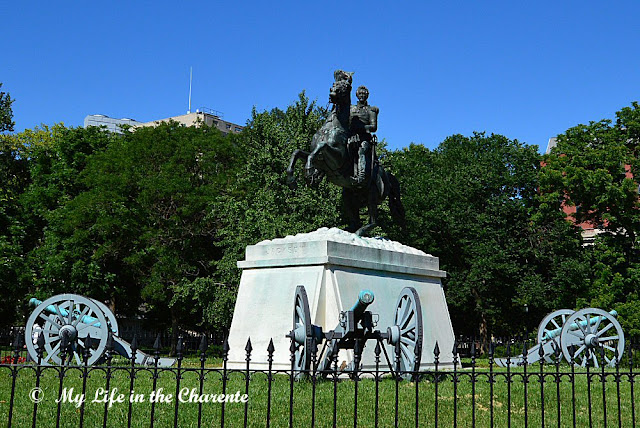 In Lafayette Square Park, a 7 acre space just north of the White House, there are several monuments to both American and foreign war heroes. This one from 1853 celebrates Andrew Jackson, the seventh president of the US and a national hero after he defeated the British in 1812 at New Orleans. How times change! 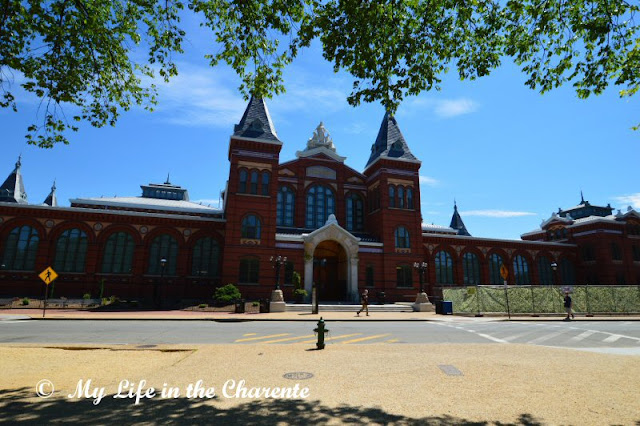 The Smithsonian Institution " the Castle"  is built in red sandstone from the state of Maryland, giving it its striking appearance.Smithson was a British chemist who bequeathed his fortune to the United States! More evidence of Smithson's legacy later! 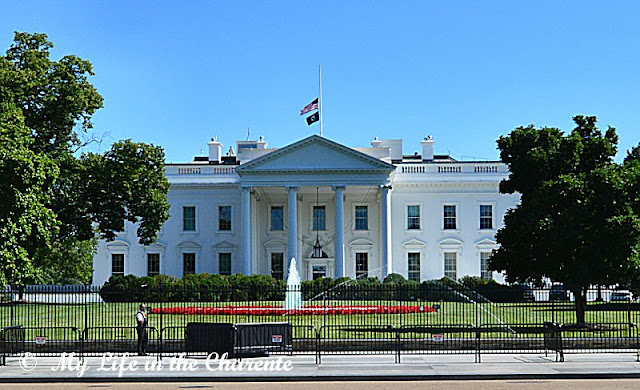 The White House needs little commentary. There was obviously a security operation in action when we were there and squads of Secret Service personnel appeared almost from nowhere to clear the large crowds of pedestrians from the area. That's why there is only one person (a security man) in this normally crowded scene! 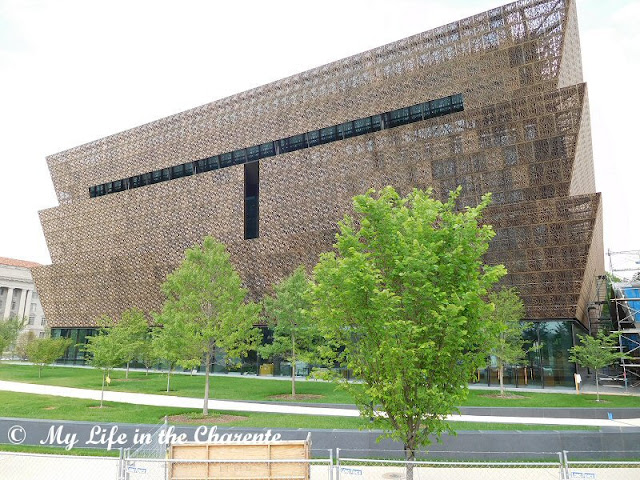 The 19th (yes,not a typo) and latest in the long line of Smithsonian  museums, the National Museum of African American History and Culture opens  later in  September 2016. There are about 8,000 square metres (85,000 sq feet) of exhibition space, including 3,000 objects,185 videos and 13 different interactives to try. 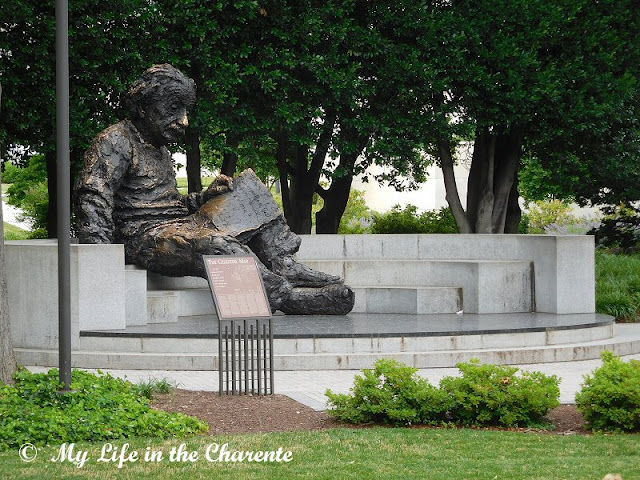 The bronze and granite Albert Einstein  statue, outside the National Academy of Sciences in Constitution Avenue, was built in 1979, the centenary of his birth. The signboard is headed "The Celestial Map" It is said that if you rub his nose, a bit of knowledge will be transferred! See the mark? 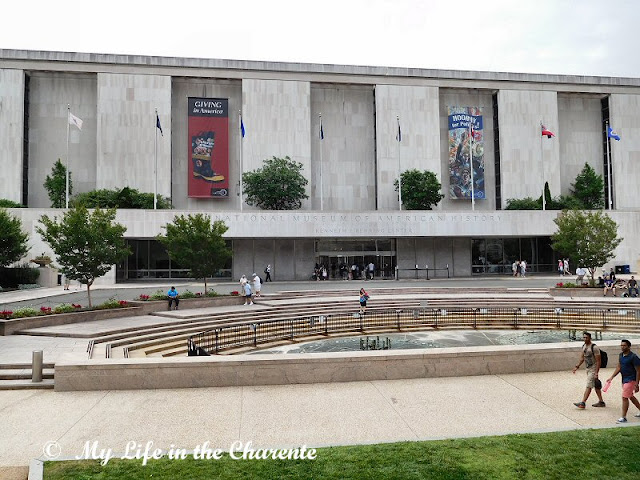 Next door to the Natural History Museum on Constitution Avenue, the American History Museum does what it says on the tin! It houses exhibitions on all aspects of American daily life, including histories of technology, invention and innovation, business and consumerism, music, and popular culture. 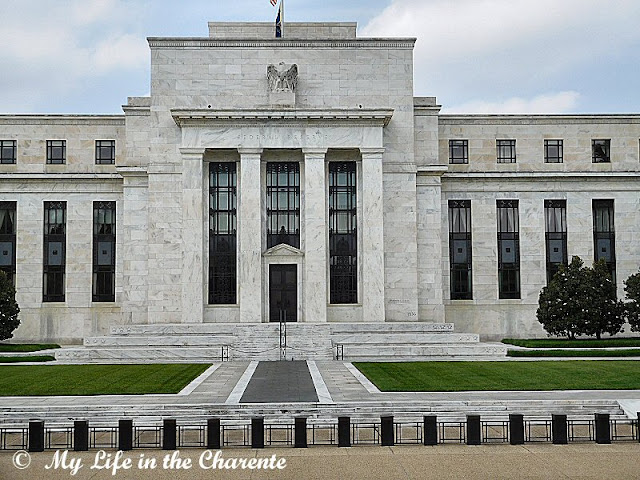 The Federal Reserve building. "The Fed" as it is commonly called, carries out  functions similar to other central banks, like the Bank of England for example, setting interest rates and  financial policies. 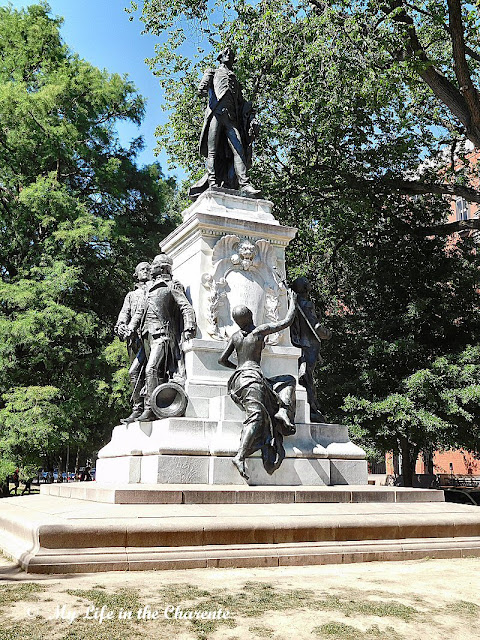 The statue of the Marquis de Lafayette, also in Lafayette Square Park, was installed in 1891. The Marquis was a hero of the American War of Independence (1775 - 1783), providing French assistance to the Colonies in their war against the British. 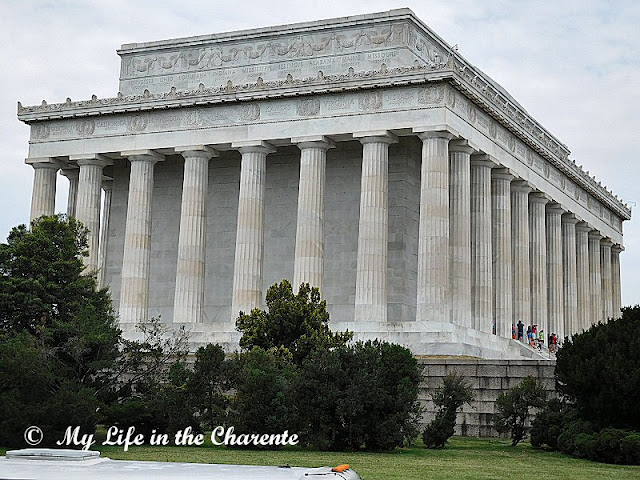 The Lincoln Memorial is set at the far west end of the National Mall and was dedicated in 1922. It has been the site of many famous orations, of which the  "I Have a Dream" speech by Martin Luther King is one. Designed by Henry Bacon, the monument features 36  seven feet diameter columns (one for each of the US states during Lincoln's presidency). 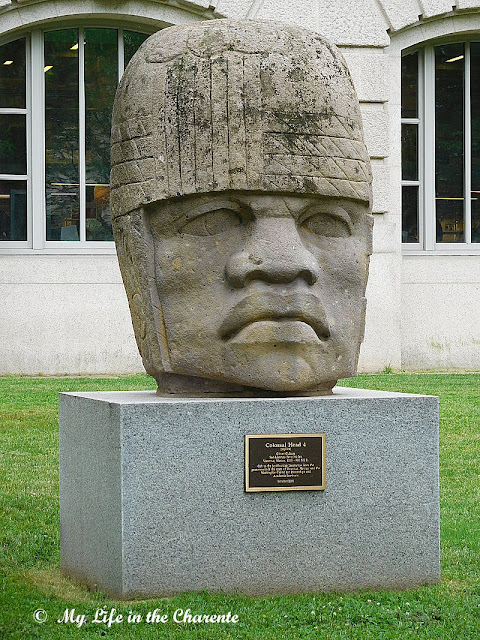 Outside the Natural History Museum is this  eye-catching Central American sculpture of an Olmec ruler. One of 17 similar heads discovered in the area, the 6 ton original is made of basalt and was sculpted without iron tools or the use of wheels! It was excavated in 1946 by an archaeologist from the Smithsonian and is on display in a museum in Veracruz.This one is actually a replica, made  in Mexico from volcanic rock and presented  to the US government in 2001 by the Mexican state of Veracruz. 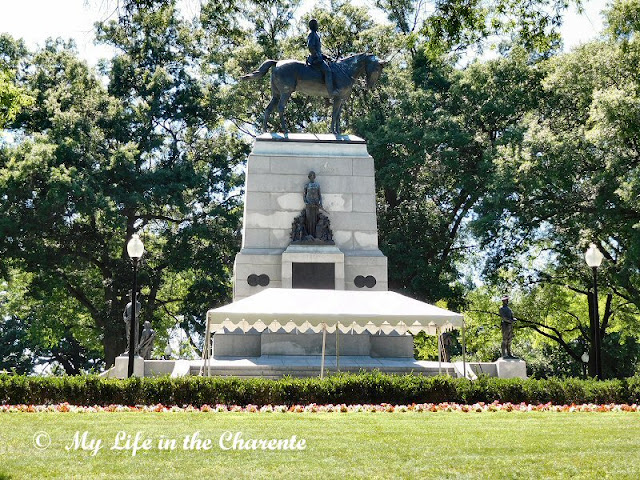 General Sherman was commander of the Army of the Tennessee during the
American Civil War, fighting for the Union cause. The artist commissioned to design the monument unfortunately died in 1900, before it could be completed, but it was however finished in 1903 through the efforts of several contemporary sculptors employed by his widow.

The US Capitol, which is the seat of the US Congress - yet more scaffolding, which apparently will be removed in early 2017! The complex sits on Capitol Hill at the east end of the National Mall. It was originally completed in 1800, but extensions, including that unmistakable dome, were added later. 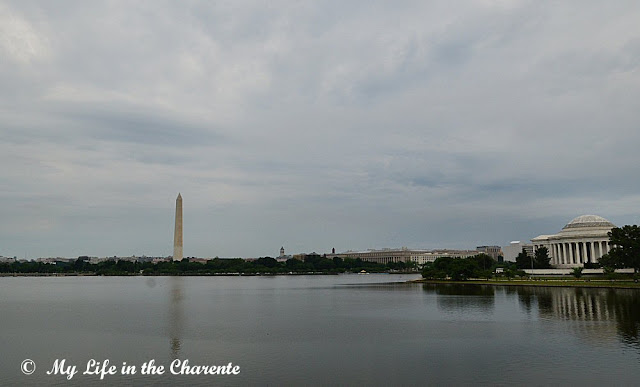 A tranquil view north, snatched from an upstairs seat on the bus(!), across the Tidal Basin, with the Washington Monument ahead in the distance and the circular Thomas Jefferson Memorial on the right.

Finally a close-up of the Washington Monument; the centrepiece of the National Mall and at 169 metres (555 feet) it is both the tallest structure in the city and the tallest stone structure in the world. Construction started in 1848, but in 1854 the funds ran out and work only restarted in 1877, by which time the new stone had to come from a different source. The colour change in the photo shows where this took place! The needle was finally finished in 1888 and there's now a lift in the middle! Visitors are allowed in limited numbers every day on a first come-first served basis. Damaged by both an earthquake and hurricane in 2011, it reopened in 2014.

The second and final episode of our Washington experience will focus on probably the most popular Smithsonian museum - Air and Space!


Also see my daily diary HERE
and My Life Before Charente (updated 09 April 2016)  I will get back to this eventually!
Posted by Diane at 21:13