On Sunday, we went to the Foire des Rameaux et des cornuelles at Villebois-Lavalette, some way south-west of here, on the border with the Dordogne department. The small town clings to the side of one of  two neighbouring hills, which rise steeply from an undulating plain. It is easy to see how those people of long ago decided that these were strategic positions for defence!

The "foire" is an annual fair, with Palm Sunday celebrations - "rameaux" means palms in French)   Cornuelles are traditional large triangular biscuits, about 150mm (6 inches) to a side, with a hole in the centre, always baked and eaten at Easter time. There were long queues at the two bakeries!. The central hole was used in the past by cornuelle sellers, who transported the biscuits by threading them onto a stick! The "fair" part was pretty much the usual; countless tables of junk goods for sale, but what is rubbish to one man is useful to another!!

We had previously booked a guided tour of the château, which was our main item of interest of the day, but that will wait for part two of this series!  We could not believe how lucky the organisers were for the weather this day; it has  been rotten for weeks, but the sun shone from a very blue sky, broken by small puffy clouds and it actually felt warm! 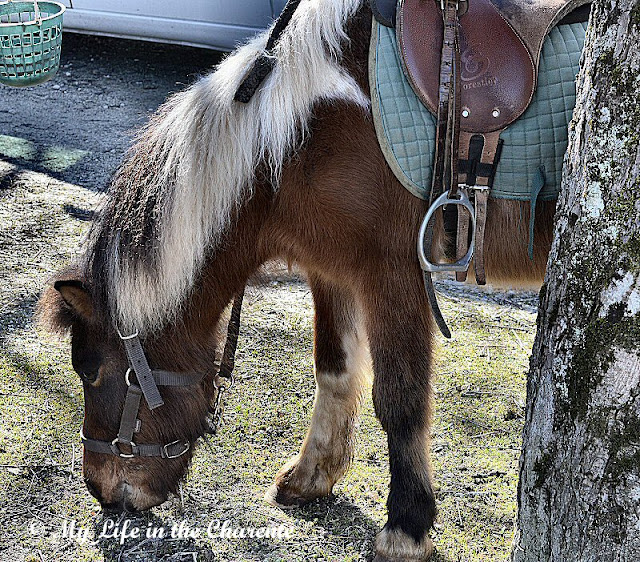 We do not often see pony rides offered at  local fairs, so this was something different for us. The animals came from a nearby equitation centre. 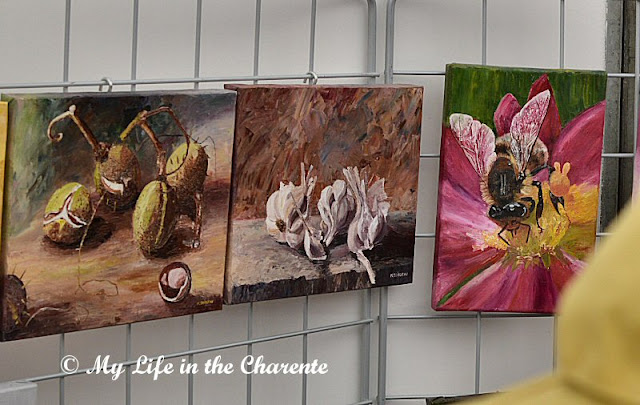 This lady artist had some very interesting art works on sale. The bee on the right was taken down and sold, seconds after I took this photo! 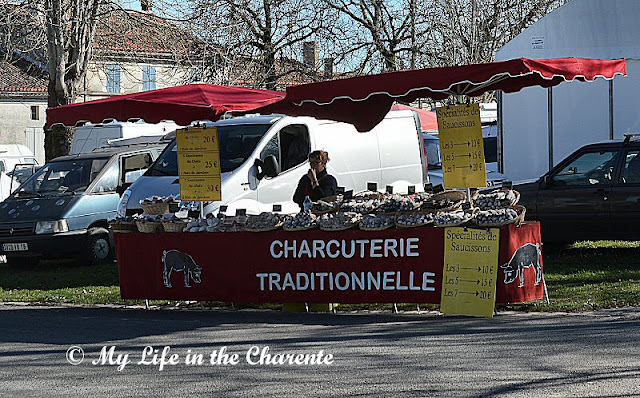 We could not return home without some great home-made saucisson. This stallholder wanted €10 for 3, but we found another stall that sold 4 for the same price! 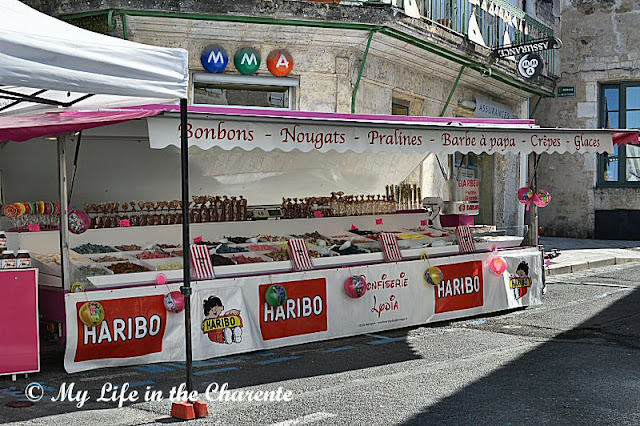 I also could not resist a small packet of French nougat. Haribo is a German sweet company founded in 1920, but now apparently the world's biggest manufacturer of gummy sweets - so now you know! 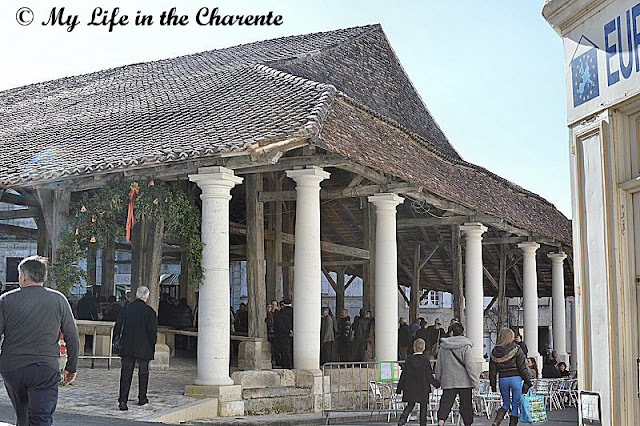 We then wandered up to the newly restored covered market place (les Halles)  in the centre of the small town. It was built in 1665, paid for by the French nobleman who owned the château on the hill above. The town mayor decided to erect the stone columns in 1855 to replace the original oak ones, when the principal road through the town was widened (it's still not very wide!). 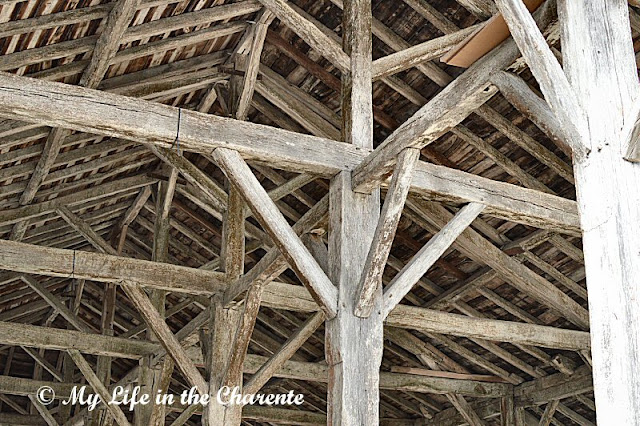 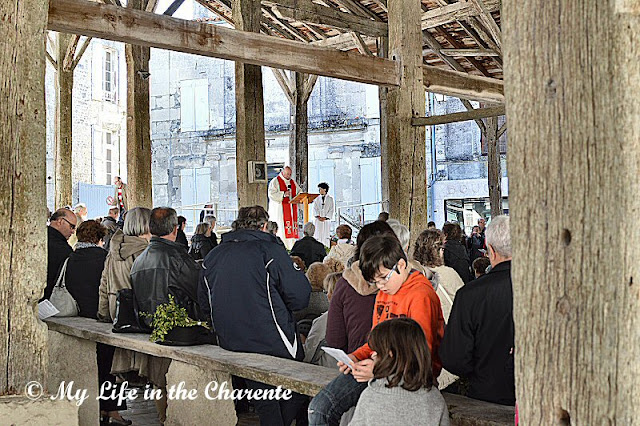 the Palm Sunday service commenced.  The congregation then made their way up the steep hill to the church for the remainder of the service.


Thankfully, I had taken some  photos of the church on a previous visit, when the building was not in use! 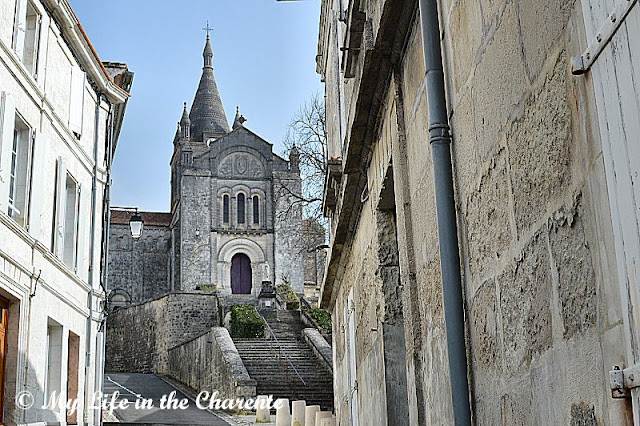 The church of Saint-Romain. You see what I mean about the climb!
On 31 March 1864, the town benefited from a bequest in the will of the parish priest, named Vacher. The careful economies of the priest, together with the sale of his goods, realised the sum of 30,000 francs, sufficient to pay, in those days, for the enlargement and reconstruction of the church, dedicated to Saint Romain de Lavalette. His will also included the proviso that a requiem mass be celebrated in  perpetuity, on the anniversary of his death.


The church, dating from the XIIIth century, was eventually enlarged and reconstructed from 1894. 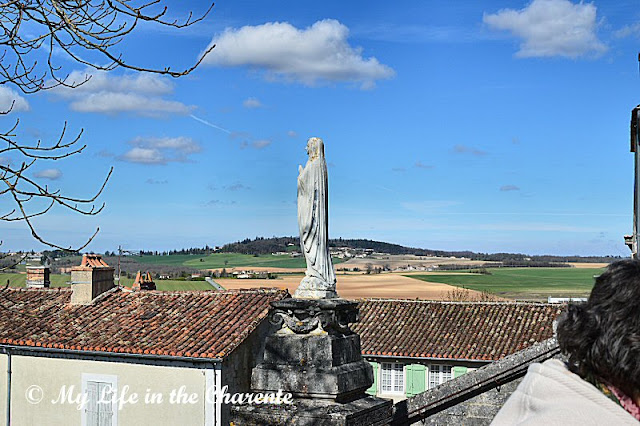 The view from the top of the church steps is quite stunning. You can see the other hill (with its own castle!) in the background. 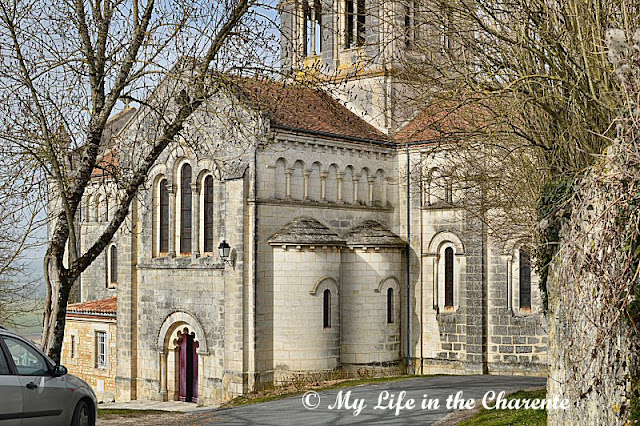 The side and rear of the church. 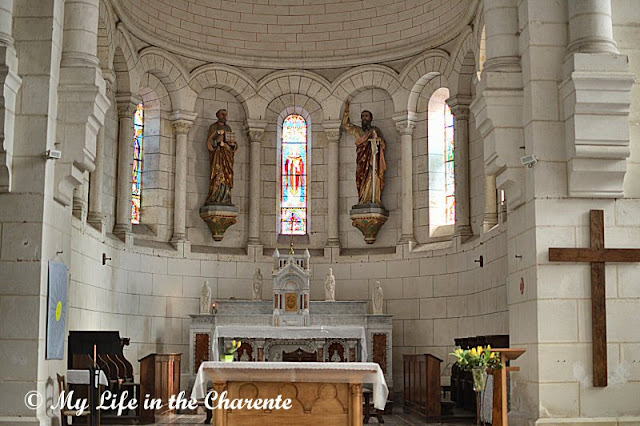 The altar inside the church. 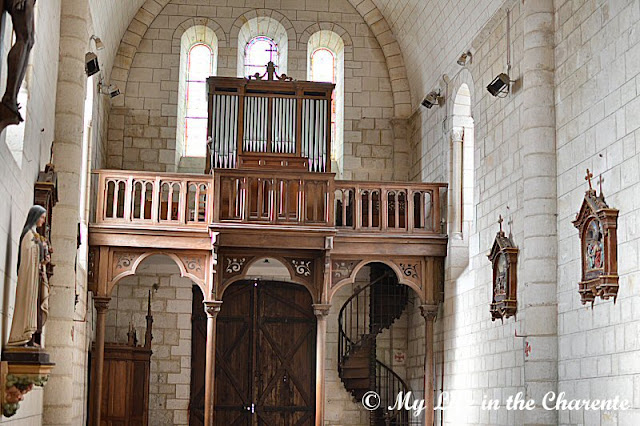 The beautifully restored organ at the back of the church. 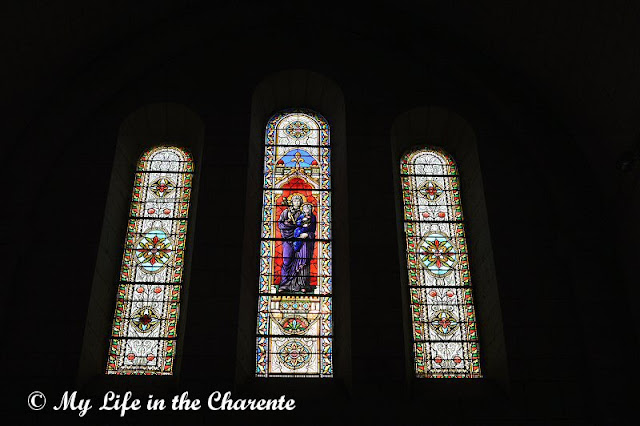 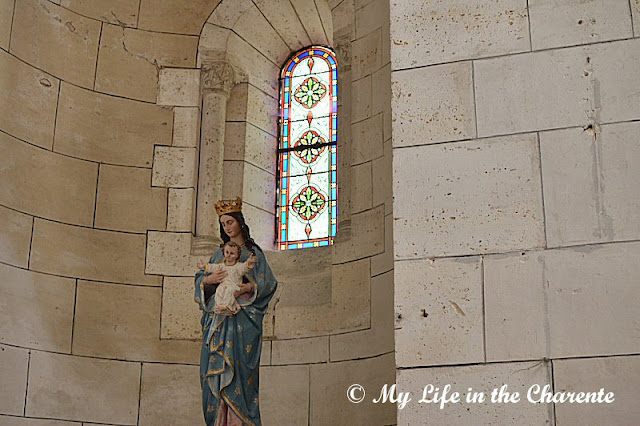 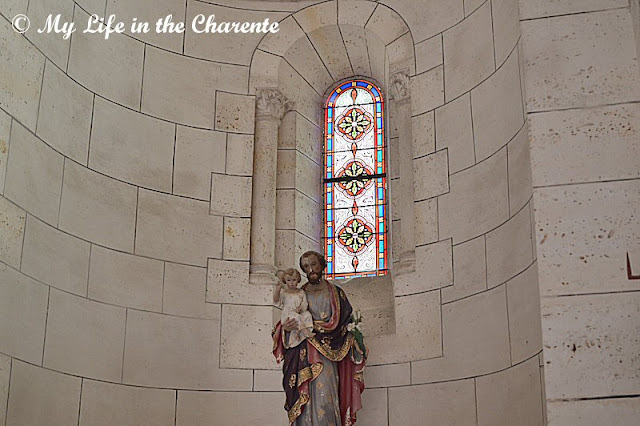 Part two of Villebois Lavalette will cover the château and some of the interesting bits of history in the town, about which our excellent tourist guide told us.
There is also a lot of information about the town HERE, but not the church.