Sweet Potatoes and Chicken with Fruit

Autumn is very definitely here, and although the oak tree is still green, other trees in the garden are shedding their leaves.  The shrubs are on the point of producing little red berries, which will certainly keep the birds happy for a while. 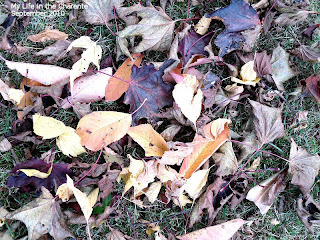 I only planted one single sweet potato, late in the year, mainly out of interest to see what would happen. There had not been a huge amount of greenery above the soil and I decided that, with the change of weather, the cold would  finish it off anyway. So I thought I might as well dig the plant out and throw it on the compost heap. I was amazed at the result and will definitely try to grow them again, but next year I will plant earlier. They are not huge, but enough for at least three meals for me. I have to say, I was quite excited at the result. You can see the length of them by the size of the board which is 240mm (9.5 inches) wide. 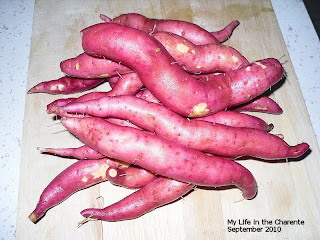 Last night I decided that I would cook a few of the smallest ones with some beans (I am still picking them from the garden) and a chicken thigh I had in the freezer.  Looking around to see what I had available I came up with the following.
Ingredients:
1 chicken thigh unfrozen.
A small handful of dates
A small handful of raisins
Enough cider to cover the bottom of the dish by about 10mm (½ nch)
Quince jam to spread over the chicken
[As this was what I had available I had no choice, but I think I would make this dish with mixed ready to eat dried fruit, instead of the dates and raisins, under normal circumstances.  The jam is a matter of choice; fig would have been second on my list]. 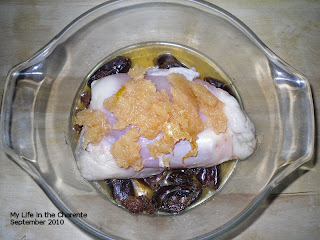 I put all of this in the microwave, covered, and cooked it on medium high until the chicken was tender. (Sorry forgot to time it, but it was not very long!)  Meanwhile, I chopped the smallest of the sweet potatoes and added to boiling water on the stove. After a few minutes, I added the beans, and five minutes later drained all the liquid off and served it up with the chicken- see below.  It was very yummy and I will certainly try this recipe again when I get back to the UK, but will double up, as of course there will be two of us once more. 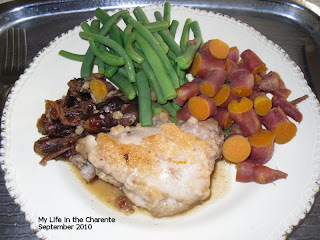 This was so quick and easy and took me less than 30 minutes from start to finish, both preparation and cooking time.
Posted by Diane at 18:20