THE RESISTANCE MOVEMENT IN CHARENTE
The Franco-German armistice which was signed on 22 June 1940 at Rethondes was not followed by the expected peace, but by the occupation of  by the Germans.    was cut in two by a line from the Pyrenees to the Swiss border.   was split by a line which passed to the East of Angouleme; the occupied zone was to the West.
After the Allied landings in in November 1942, the Germans occupied the whole of , including the so-called ‘free-zone’.  From March 1943, the gradual relaxation of strict controls along the demarcation line prompted the formation of little centres of resistance; this was the time for the creation of the resistance group “Bir’Hacheim” at Chasseneuil. (see below)
MÉMORIAL DE LA RÉSISTANCE
CHASSENEUIL-SUR-BONNIEURE 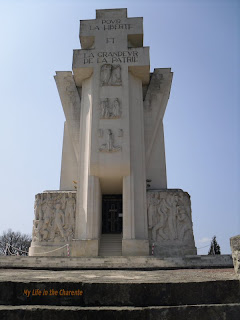 After the War, Andre Chabanne devised the plan to raise a memorial to the resistance, in particular to the Maquis Bir’Hacheim. It was built on a hill overlooking Chasseneuil on land given by Mt Edouard Pascaud, the then Maire (Mayor) of Chasseneuil-sur-Bonnieure. 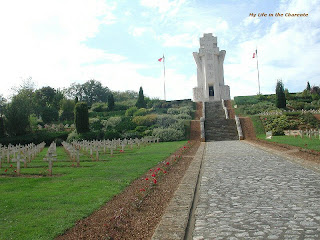 The Maquis Bir’Hacheim was formed in July 1943, mainly because of the increasing number of volunteers. The main activities of the maquis were : combat against the militiamen, sabotage of railway lines (in particular the destruction of bridges), attacks on the German command post at La Rochefoucauld and the liberation of the Confolens region with the maquis group “FTP” of Colonel Bernard.
The four main members of the group were:
Colonel André Chabanne.  He was arrested by the Germans in 1940 but escaped from two prison camps. In 1943 he was appointed head of the secret army (AS) in the .  He worked towards the construction of the memorial but was very sadly killed in a road accident on 13 Feb 1963.
Guy Pascaud.  He was actively involved with the young volunteers, he was arrested on 22 March 1944 which put paid to his activities and he returned to in July 1945
Helene Nebout. She assisted in the formation of the group. She took part in many operations and by some miracle survived after changing her identity 14 times.  At the time of writing, she is still alive and as far as I know, she lives in La Rochefecauld.
Claude Bonnier.  He was an officer of the parachute forces.  On 8 February 1944 he was arrested and taken to where he committed suicide by taking a cyanide pill. 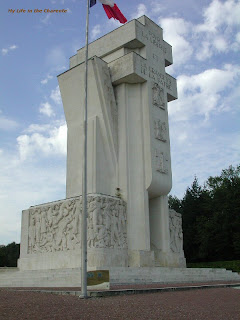 Construction started in 1945, mainly by former German soldiers who were, at that stage, prisoners.  The monument was eventually dedicated as one of the National Monuments to the memory of the Resistance on 21 October 1951 by the then President of the Republique, Vincent Auriol. 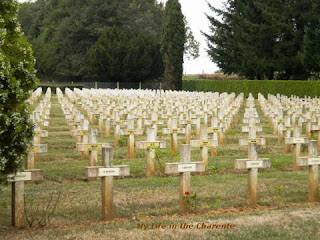 Messrs Peyronnet, Guiraud and Lamourdedieu carved the bas-reliefs depicting the lives of civilian and military resistance fighters, and their sacrifices to liberate 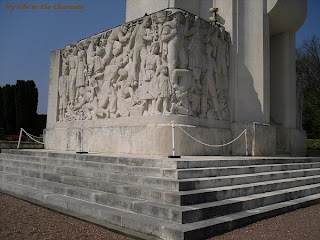 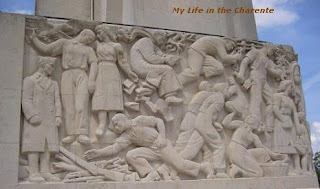 The 28 alcoves in the crypt hold the remains of 30 fighters, including Colonel Chabanne and the military delegate for Southwest France Region B.  Visitors entering the crypt will see an inscription overhead: "Français, ne les oubliez pas" ("People of France, do not forget them").
This necropolis spans over two hectares. Most of the 2,255 soldiers and resistance fighters buried here were from . This cemetery's distinctive feature, however, is that it is perched on a hillside. 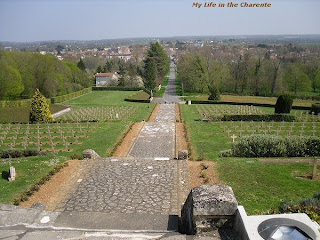 The building faces maquis bases. It is 21 metres high and features a victory V (the emblem of the Resistance) and the Cross of Lorraine. Considerable financial and physical resources went into this memorial. It took five years to build, cost francs 13,000,000, and weighs 2,000 tonnes.
The blocks weigh as much as two tonnes each. The bas-reliefs span 80 sq m. Builders had to dig a 1,125 sq m hole for the 2,000 cubic metres of concrete and 30 tonnes of steel used to build the crypt and nine supporting pillars.


Sources: Les Chemins de la Mémoire magazine, October 2001; Mémorial de la Résistance and the Chasseneuil Tourist board and museum.
All photographs are my own.
Posted by Diane at 13:46

Labels: Chasseneuil, Resistance Memorial, Round and About