Nigel flew into Limoges yesterday, very tired, after a very early morning start to get to Stansted airport before the M25 traffic got jammed.  It is a nightmare if he hits the ' early morning rush', compounded by the 50 mph speed limited road widening works; everything quickly comes to a standstill and the plane does not wait for anyone!


Within a couple of minutes of the plane landing, we had our first rain for weeks; he seems to have this magic touch of changing hot sunny days into cooler and wet ones!!


Dinner was asparagus from the garden, steamed and served with melted butter (2 tablespoons), soy sauce (1 tablespoon) and balsamic vinegar (1 teaspoon). This was served with French country style bread.

Pigs Heart a la Diane     (If you don't like offal, read no further!!!!!)
2 Pigs hearts (Cut into bite size pieces with any tough bits removed)
200 gr dried beans, soaked over night (I used cocos blancs but not sure what they are in English!)
Duck fat (because I had it in the fridge)
400 gr Toulouse Sausage (cut into about 3 inch pieces)
4 large tomatoes chopped
4 carrots, peeled and sliced
2 onions, sliced
1 med courgette (I would have used 2 sticks of celery but had none in the house!)
6 garlic cloves cut in half
Freshly ground pepper
Good pinch of cayenne pepper
1 table spoon mixed herbs
Cider
Drain the beans and cook for 5 mins in fresh water, drain and set aside.
Melt the duck fat and brown the heart pieces.
Add the carrots, onions and tomatoes, (also sliced celery if using) cook for a few minutes.  Add the drained beans, mixed herbs, peppers and enough cider to just cover.  Simmer for about 1½ hours, stirring occasionally.
Meanwhile brown the sausages in a little fat and slice the courgette. Turn the oven on to 17O°C.  Put everything together into a casserole dish, cover and cook for a further 1 to 1½ hours. Stir halfway through cooking.


Serve with a salad, but this was really a meal on its own.


Nigel's comment was "very good".  BUT we did both think that maybe the second part of the cooking would have been better in the slow cooker and given more time. The heart was tender but not melt in the mouth, which it usually is when I cook them slowly. 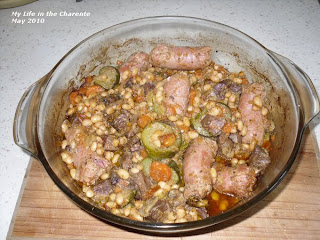