We had a late start, having caught up with some sleep and met friends in La Rochefoucauld for lunch.  We went to a tiny back street restaurant, which I found with my friend Liz a few years ago.  It is a truckers' restaurant with a set menu, cheap, clean and so far I have never had a meal that I have not enjoyed.  €11 for a 6 course meal with wine included; who can complain about that?
Yesterday we had a noodle soup with fresh French baguette, followed by pate and a mixed cous cous salad.  We then had gammon and mushy peas followed by a lettuce salad.  Afterwards a huge plate of a selection of cheeses with more baguette, and this was followed by a choice of puddings.  Floating islands, (a tasty marshmallow floating in custard) or a creamy type yoghurt with apricot jam.  Wendy and Nigel had the 'Islands' while Jim and I had the Yoghurt, the general consensus was that both tasted very good.  This was all followed by coffee.  Need I add that we were all feeling very well fed! 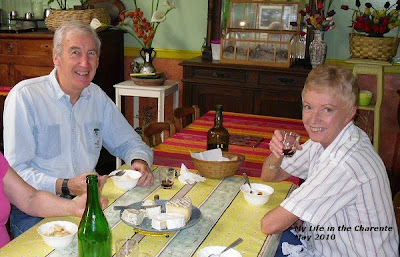 You can see the large plate of cheese still on the table while we were tucking into the pudding. I'm still enjoying the red wine - all included in the price!!

After lunch, we took a walk around La Rochefoucauld (the exercise was definitely needed) where I took many pictures, but editing will have to wait until I have more time.  I will then 'do' a couple of posts 'Around and About La Rochefoucauld'.  Here though is a picture of the beautiful château in which the La Rochefoucauld family still live.  Part is open to the public and there is continuous restoration going on.  It is certainly well worth a visit. 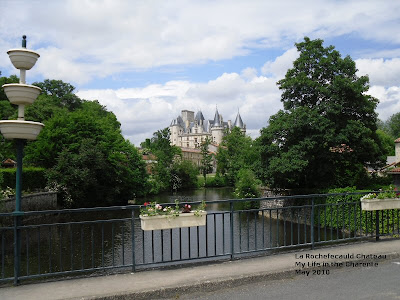 Labels: France, Round and About