For the car lovers out there

My visitors have now left, and although they spent quite a bit of time on their own while I applied a few coats of paint to the gates, it was wonderful to see them again and when we did have time together, it was quality time, as they say!
I am now catching up with all the tomatoes, figs, quinces, etc which have been multiplying and ripening in the garden, before I return to painting the gates with yet more coats of paint. The paint comes from Finland and costs an eye-watering amount, but is supposed to last 10 years in the sun. Painting only once every 10 years should occupy less time than more frequent applications, but it seems to me that I will be spending the same amount of time now, putting on lots more coats, as the paint is so thin!

I have masses to update you all on, but until I have the time, I thought that for the car lovers out there, this car blog would give me a chance to get my act together again over the next few days. 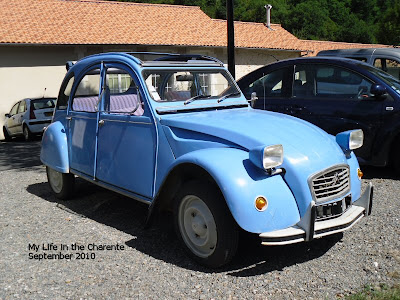 I saw this at the Bric-a-Brac on Sunday and no, it was not for sale! 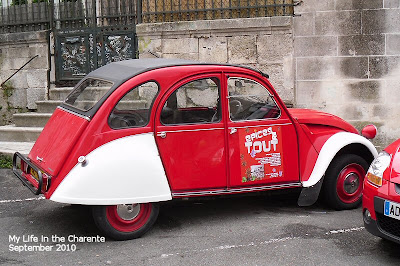 This one we saw in Angouleme where my visitors and I spent the day on Tuesday. 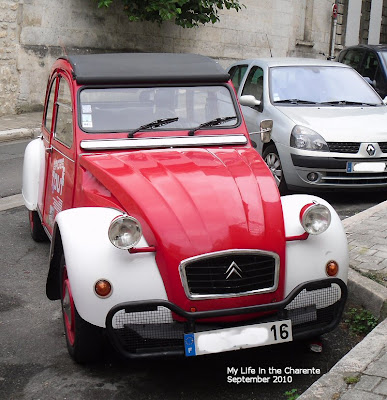 If you are near Angouleme between the 17th and 19th  September, that will be an interesting weekend. We watched them putting up the barriers while we were there for this special occasion. 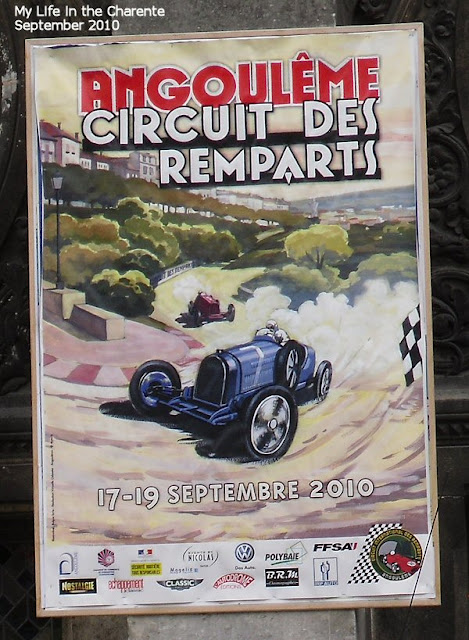 Angouleme's "Circuit des Remparts" attracts hundreds of cars and drivers from across the world each year.  Many of the cars are historic, among them Bugatti, Riley and former Le Mans racers.  It is a difficult circuit, as it is in the centre of town.  It is the only historic circuit in France and one of  only two in Europe.  The other is in Monaco, so probably very exclusive!!!
The route has not changed since the races began in 1939, with 10 participants.  The race came to a halt during the war years, only starting up again in 1947.  New rules a few years later, meant that French street racing had to stop, but in the early eighties, a passionate team managed to get the circuit up and running again.
Over 300 cars are expected for the weekend, but the festivities always  begin calmly with the Concours d'Elegance, held on the Champs au Mars square on Friday evening.  We will see 30 cars including the Alfa 6C Zagato, the De Dion Bouton and the cabriolet Delage taking part in the gala event.
Friday 17 September - 21h00. Concours d'Elegance.
Saturday 18 September -  08h30 Start of the International Rally in the Charente - Esplanade Chais Magelis.
Sunday 19 September - 08h00 Practice for the Circuit des Remparts
and 14h00 - 18h00  Circuit des Remparts race.
I would love to go and see this event, but it is one which I think will have to wait until Nigel has moved to France and we can go together.  I find Angouleme a difficult town to drive in (a lot of the centre is old, narrow and twisty), with one way streets where I least expect them, and at a time like this, there will be be many roads closed off, so getting lost would not be difficult, even with satnav!!  As I seldom go there, usually only with visitors, I do not know the town very well.
For further information and an excellent video go to http://www.circuit-des-remparts.com/
Posted by Diane at 19:41

Labels: Angouleme, Cars, Old Cars, Round and About