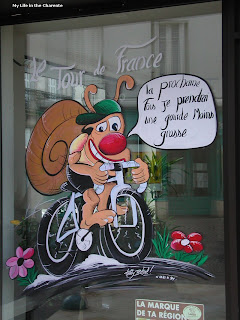 Advertising on a shop window in Angouleme 2007
The Tour de France is an annual  cycle race which covers approximately 3,600 kilometres (2,200 mi) throughout  and bordering countries. The race lasts three weeks and attracts mostly professional cyclists from around the world. The race is broken into day-long segments, called stages. Individual times to finish each stage are totalled to determine the overall winner at the end of the race. The rider with the lowest aggregate time at the end of each day wears a yellow jersey. The course changes every year and starts from a different place (often in a different country), but it has always finished in Paris, Since 1975, the (sprint) finish of the final stage has been along the Champs-Elysées.

The number of teams usually varies between 20 to 22, with nine riders in each. Entry is by invitation to teams chosen by the race organiser, the Amaury Sport Organisation.
Rotterdam is venue for this year's Grand Depart (start). To see this years route and all information see HERE. 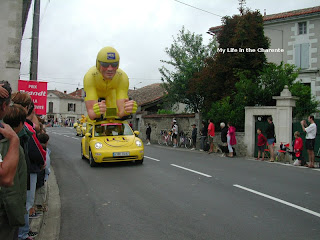 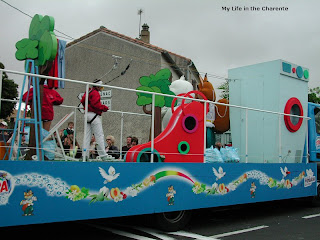 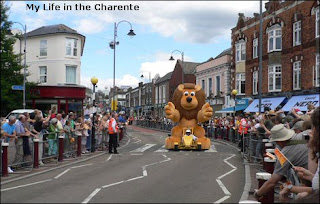 Each day, before the riders start the stage , the publicity caravan passes along the route, throwing out samples of various advertising items to all the spectators. These are pictures from  2007 and 2009.There is a variety of cold drinks, bags, caps, edibles and free coupons. It is all a mad rush and everyone wants to catch as many items as possible.  The people who do best, are the families who space themselves out over a short distance.  It is quite difficult with just  the two of us, but Nigel's height always helps! 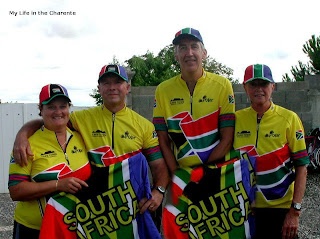 Watching the time trial with friends in 2007 - As you can see we were supporting the South African cyclist Robbie Hunter. Nigel and I are on the right.
History of the Tour
The first Tour de France was designed as a publicity stunt for the French sports newspaper L’Auto, a race that was for the most gutsy and tough of professional cyclists of the time. The course was marked out to be a round stage race, covering a distance of 2428 km, taking place over 19 days in six stages and rankings based on the cumulative time over the course of the tour.

At the very first Tour de France, sixty riders began that race. The winner who dominated throughout the tour was Maurice Garin, who still today holds the record for a win by the greatest margin of 2 hours and 49 mins.

With over 20,000 people turning up to see Maurice Garin cross the finish line in that year, the first Tour de France was hailed as a great success. The next year, 1904, the Tour de France became a must-win for every cyclist taking part. And this had disastrous results. The second tour was later billed as almost the last Tour de France, as riders would go to any lengths to try and win. Cheating was rife.

Riders were caught catching trains, taking cars and even dropping spikes trying to flatten their opponents’ tyres. Maurice Garin had won the race for the second time, but as reports of cheating surfaced, the top four riders were disqualified for their infractions, and it was to the 5th place little-known cyclist, Henri Cornet, that the 1904 winner's prize was awarded. After these major implications of the second Tour de France, the race officials then decided to implement many more rules on how the race was to be run.

The Tour de France was greatly limited during the First World War, but around this time it was the 1919 race, that saw the now infamous yellow jersey or “maillot jaune” introduced. The leading cyclist wore the yellow jersey in order to show who was leading the race, because previously no one could recognise who was winning.

Part way through the 1919 race, the organisers introduced the jersey into the race and it was ’s Eugene Christophe who wore the yellow jersey for the first time. In the later stages of the race, bad luck caught up with Eugene Christophe yet again just as in his previous racing years on the tour.This time he suffered various punctures and a broken fork that held him back and he later finished the 1919 tour in 3rd place. By now the tour covered a distance of 5560km and it was Firmin Lambot who won that year; the Belgian was described as the first real contender of this new generation. 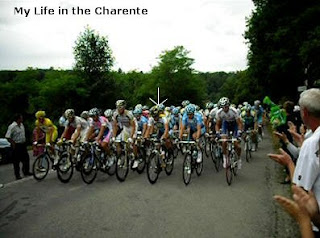 Lance Armstrong under the white arrow in the front of the peloton near Limoges 2009
One of the most famous cyclists in this year’s Tour is Lance Edward Armstrong (born Lance Edward Gunderson on September 18, 1971).  He is an American professional road racing cyclist who is best known for winning Tour de France a record seven consecutive times, after having survived testicular cancer and tumours to both brain and lung.  After his 7th win he retired from racing, but returned last year 2009.  We were lucky enough to see him as he literally flew past us near last year.
The photographs are my own, please do not copy.
Credits for information :-
http://www.bellaonline.com/articles/art11240.asp
http://en.wikipedia.org/wiki/Tour_de_France
Posted by Diane at 16:02

Labels: France, Round and About, Tour de France