Happy 4th of July to all my American followers.

It was so hot early this morning that I was up and about at 06h00 (on a Sunday!) and by 07h00 I was out on the road on my bike. No camera today, (see the last post), so much to my disgust, I could not take a picture of the beautiful yellow and black caterpillar that posed so nicely for me. Neither could I take the several ‘things’ along the route that took my eye; very annoying. BUT on the other hand I did have a sensible ride with no stops and I made it home with 32 kms under my belt just as it was starting to get even hotter. I even picked a hilly route, so I did not take it easy and loaf along the way.
See the following elevation thanks to bikeroutetoaster 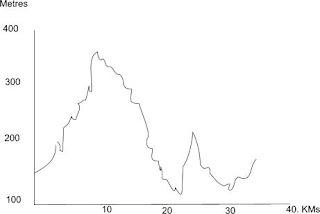 Ok so there was lots of downhill but remember all the climbing, I had to do to enjoy the way back down!

TDF
Standing points for the first 6 riders,with their team names and including two Brits, although one is Scottish and one Welsh!! (Yesterday, Saturday 03 July 2010 - the prologue)
ROTTERDAM (8.9 Km) 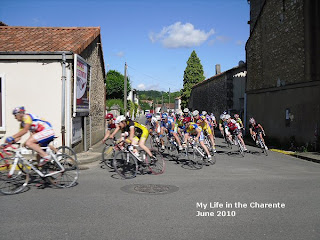 On one weekend last month, I went shopping in Chasseneuil, only to find that I could not park anywhere close to a shop, or even drive down any of the blocked roads!  Cause: a cycle race doing circuits through the town.   I think if I was not a cyclist, I may not have been very impressed.
_____________________________________________________________
THE CHARENTAISE SLIPPER
This is surely the most renowned slipper in the world! Well so I am told……
As an emblem of local artisans’ know-how and the symbol of an enduring French success story, this slipper has managed never to go out of fashion!
The history of the Charentaise slipper - The production of felt in Poitou-Charentes dates back many years: in the 18th century, the felt makers in Rochefort made uniforms for the army, while the paper industry rapidly developed around Angouleme (the felt is used to absorb the humidity in paper waste).
The wool produced in the Confolens region goes through several transformations and operations (stripping, carding, spinning, weaving…) to make rolls of felt from which the necessary sections are cut.
Not long after this period, the scrap tissue of this lovely material was used to make slippers which were put inside wooden shoes. Warm, comfortable and snug, the “Charentaise” slippers quickly earned their ennoblement.
At the end of the 19th century, expectations multiplied and the Charentaise slipper industry developed all over the Horte and Tardoire area. In 2004, with the encouragement of the General Council of Charente, manufacturers started to mobilize themselves in order to reproduce the product, now part of French heritage.
Its shape, stitch and  assembly process, with the natural material of wool, felt and leather, were brought back to life, thanks to the industry’s and designer’s blend of technical and aesthetical know-how. The exhibition of the 176 models at the ‘Maison et Objet’ tradeshow in September 2006 was a great success.
If you are visiting the Charente, you could not possibly leave without a bottle of its world renowned Cognac or secondly a pair of these famous slippers.  The following picture shows just one of the many models that are made.

Write up and picture credit : http://www.tcha-charentaise.com/pdf/tchadepliant.pdf
Posted by Diane at 18:15

Labels: Charentaise Slipper, Round and About, Tour de France