A few weeks ago I said I would do a post on the Château de la Rochefoucauld. I was there on a visit this morning with friends, so with a few new photos on hand, I thought this was a good time to go ahead.

All notes are taken directly from the pamphlet handed out during the tour of the Château.  The architectural section is quite complicated and technical, but as a non-expert, I wouldn't dream of trying to paraphrase!! The sheer craftsmanship of the stone staircase is a joy to behold, and all done without machinery! All pictures are my own and will enlarge with just a click.
Historical Background
Towards 980 AD Fucaldus (vir nobilisimus), younger brother of the viscount of Limoges, set up a fortified camp on the rock overlooking the stream. He called it "Fucaldus in rupe" or Foucauld's Rock.
Early in the 11th century, his son built the square keep.
1350: Jean le Bon, king of France offered an annual 300 pound rent to Aimery de la Rochefoucauld, his councillor, who, therefore, built the entrance towers.
1453: Jean de La Rochefoucauld built the 3 angle towers and heightened the keep, following the victorious battle of Castillon which put an end to the 100 Years War.
1520: Anne Polignac, wife of François II de La Rochefoucauld built the galleries and the grand staircase in Renaissance style. The plans were attributed to those of Leonardo de Vinci.
1615: Opening of the courtyard and the demolition of the mediaeval castle to honour the visit of Louis XIII of France.
1760: Reconstruction of the 18th century wing, to replace that of the 17th, which had burnt down. 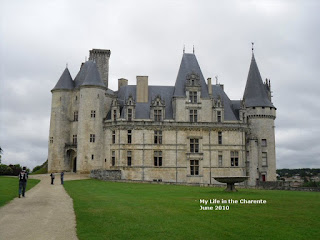 Architectural Features
The main structure is girdled by tall round towers. The oldest of these shaped the main entrance which protected the drawbridge on the side of the 'plateau'. The others, dating from the 15th century, crowned by 'machicoulis' and very steep curb roofs.
To the South, an original plan, due, no doubt, to a wish totally to enclose the large staircase, the facade was brought forward to come into line with the lateral towers.
The Renaissance Galleries
Work started in 1520
The most startling feature of the courtyard lies in its layout, which should have been uniformly rectangular, flanked by uniform features, but the plan of the North wing - one can distinguish the remains of the gallery torn out of the Chapel - was never built, and the West wing was burnt down and rebuilt in the 18th century. 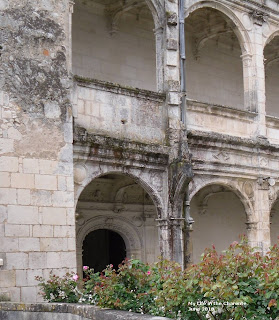 The picture above clearly shows where the arch would have been if the North wing had been built.
The other two sides of the courtyard reveal the astonishing decor of an Italian 'cortile' pierced by arcades set on three levels. This is exceptional in France echoing Bramante's original sketches of St. Damase's Courtyard in the Vatican. The first two levels betray the use of Italian models as well as the regular treatment of the arcades separated by pillars surmounted by Corinthian capitals as well as the will to sketch above the pilasters and arcs the continuous line of the entablement ' à l'antique', including the architrave frieze and corniche. Round discs are discreetly enscribed in the 'écoinçons'. 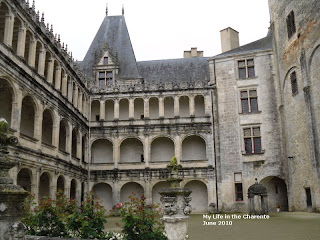 The border which runs from the basis of the roof is made up of an alteration of pinnacles and small gables shaped like cockle shells which closely follow the line of the dormer windows. This sculpted border, which here supplements the dormer windows, was to have a noble future, because 50 years later it would be found on the Louvre. 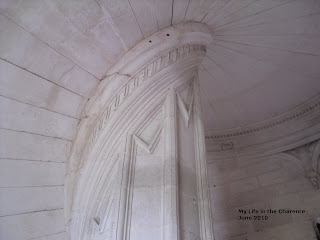 The Grand Staircase is the masterpiece of the château bearing the traditional form of a screw carrying a powerfully twisted shaft. The staircase consists of 108 steps, the widest is 4 metres. 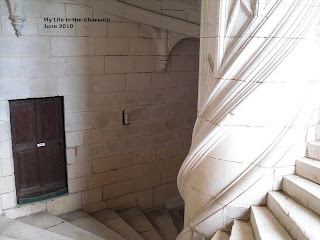 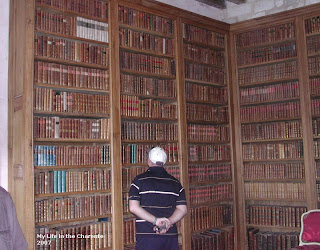 The château possesses a total of 21,000 books divided between 4 libraries. 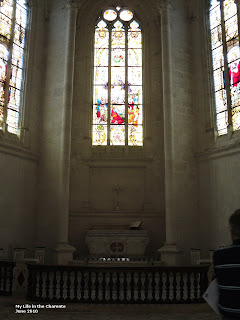 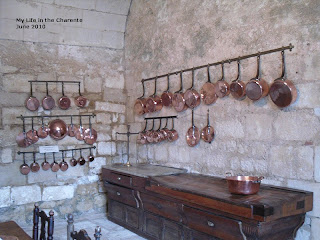 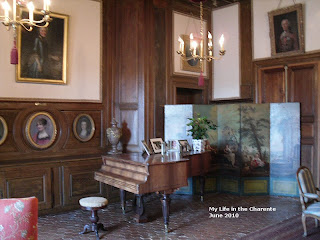 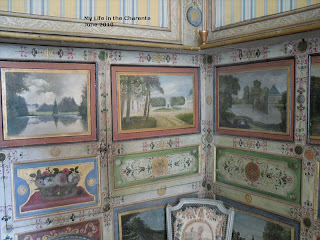 One of the smaller rooms with beautifully painted panels. 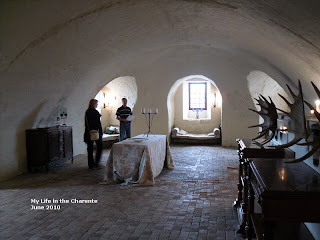 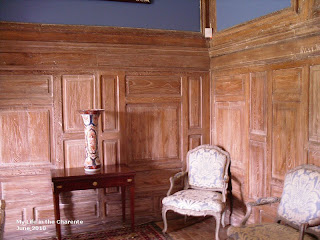 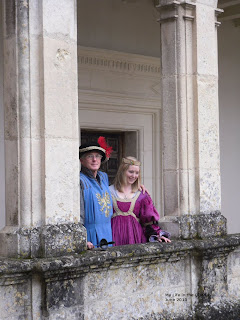 My friends acting as Lord and Lady of the château, surveying all their land in period dress. There is a whole wardrobe of clothes to choose from, in which to have your photo taken. Great fun was had by all. 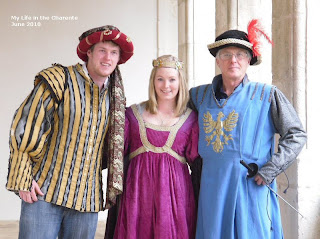 Labels: Charente, La Rochefoucauld, Round and About