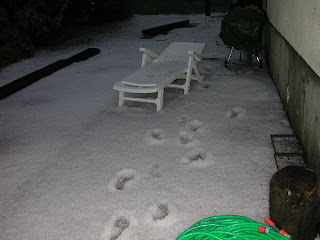 A night to remember!! I had just had a long chat to Nigel on the phone and closed most of the shutters, as it was quite dark outside. I was about to get myself something to eat, when I thought I was under attack. The noise was horrendous and looking outside through the one glazed door on which I had not closed the shutters, I realised I was in the midst of a gigantic hail storm. The hailstones were the size of large marbles and there was just no let up for about 20 minutes. The water came in through the kitchen ceiling trap door  by the bucket full. The barn, which also has the lovely timber-floored spare bedroom in the bottom half, had just had its roof done. I thought with relief that all would  be OK, but I did not bargain with the amount of water that came under the barn doors from the raging water torrent in the street, generated by drains blocked by hailstones. This suddenly became my priority and by torchlight I managed to clear the drains and sweep out as much water as possible. I then went back to clear up the rest of the house and worked until 01h00 before collapsing into bed. A lot of the vines around Cognac were wiped out, so cognac production could be badly affected. Everyone here in the hamlet had some sort of problem and I think we all had some flooding. I had 13 roof tiles broken; the kitchen was flooded, as was the passage and part of our bedroom. The lights in the bathroom, toilet and passage all filled up with water, leaving me in darkness, as of course this blew the main switch. I had to dry everything out and get the electricity back on the next day. 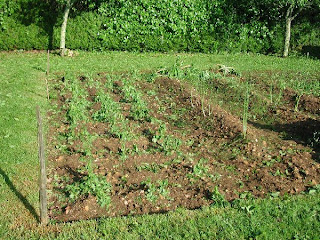 I was lucky that I was able to contact the roof tiler  who had fixed the barn roof the previous year. I had all the broken tiles replaced the next day and luckily the insurance covered the cost. Meanwhile the garden was a total disaster.  The potatoes, although flattened, partly recovered and the asparagus was left with just a few sticks still standing.  The remainder was a complete right-off and had to be replanted. Luckily for me, Brian had several spare plants in his greenhouse and helped out. We were told afterwards that this was the storm of the century; I certainly hope so as I can well do without a repeat of it. Someone else can mop up in a hundred years time!! While typing this in the UK, (Feb 2010), only last week France suffered severe storms and a number of people were sadly killed. David has been in touch and I gather that we have a number of branches on the ground in the garden, but the house fared much better this time and there were no problems there. Well done Jean-Paul, you did a good job fixing the roof. 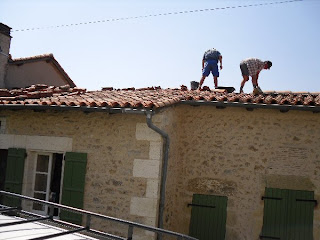 I feel a lot more confident now that the whole roof has since been sorted out but the road camber and drainage are still a problem that cannot be easily overcome. There are only two drainage gratings in the road and if they get blocked the water has only one way to go - into the house. This needs some serious thought!!
Posted by Diane at 08:30