28 August 2006
We quietly celebrated our 25th wedding anniversary in the UK with a night out at our local restaurant/pub.

1 Sept 2006
We loaded the car up in the morning and when I say loaded I mean just that! Our large deep freeze/ refrigerator slid into the back of the car (it just fitted) and with the door slightly ajar it was fully packed up with all the wall paper that we had bought to finish off the remaining rooms, in particular the lounge, the rest of the passage and second toilet. Around this was packed as many boxes as possible and the chairs (nomadic again) for the lounge. I left early as I was unsure how long it would take me with all the extra weight in the car and I had planned to stop at friend’s house for lunch near Dover. She is an ex Rhodesian so we had lots of news to catch up with! Having left for the final bit into Dover I arrived at the port only to be told that there had been a problem with the ferry and it was running two hours late. I managed to get hold of Nigel on my mobile phone and he in turn successfully got hold of our friends who live in the north of France and who I was staying with overnight. They had dinner waiting for me on my arrival and I soon fell into bed to make an early start the next day

2 September 2006
When we had downsized our house in the UK so that we had the money to buy in France, we had taken a van load of packed boxes over to our friends in France where they had been stored in a stable. Believe it or not I still managed to find room to pack a few more of these boxes into the car before I set off in the morning. It was a pretty uneventful trip but it was fairly slow as with the car so loaded up I had to take things easy. On arrival at the house I unpacked what I could lift and left the rest until I could find some help. 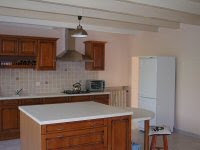 3 September 2006
I discovered a few jobs that the builder had still not done so I phoned him and he said he would be there later in the day. They duly arrived and between them they carried the fridge/freezer into the kitchen for me. By then I had taken a walk around the garden and found that David had successfully managed to keep the grass under control for me, what a relief.
4 September – 15 September 2006
This was spent papering and painting with the odd break to do some shopping and fitting in a meal here and there. I managed to finish the lounge, passage and bathroom and was fairly satisfied with my fortnights work. The lounge previously had pink walls and a black and white floor. It was now a light cream with soft grey tiles on the floor. 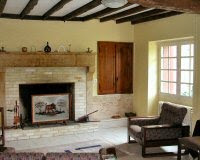 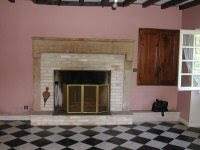 During this time I had also paid the builder up to date. What was still left to do would only be in Phase two and when we had managed to save some more money!! He still had to bring in a truck and remove all the clay that he had covered the garden with but he said he would get that done soon. Meanwhile the grass and weeds were growing over the whole area and David was having to cut it with a tractor to keep some sort of order. 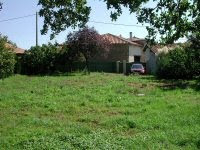 I stocked up the back of the car with wine before my return, so much cheaper in France, and drove back to the UK via my friends with an overnight stop.
This was the end of our trips to the Charente for the year as we had previously arranged a holiday to visit friends and family in Sydney, Australia during October. When we had made these plans we did not know we would have a house in France to renovate!! David was left in charge of everything in France and the plan was he would run the heating over winter on a frost setting so the house did not get cold and damp and neither hopefully would the water pipes freeze.