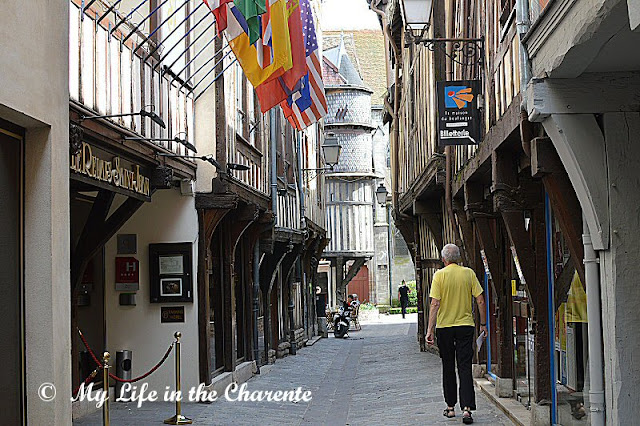 We're in the pedestrianised rue Paillot de Montabert here, with our hotel, the Relais Saint Jean on the left. A great place to stay and the friendly and helpful managers speak English! The car parking is brilliant; you drive down a ramp into a basement in a nearby street, park the car, take your bags down a passage to a lift, which magically pops up in the hotel reception! Very convenient, as there aren't many places to street park in the old town area. 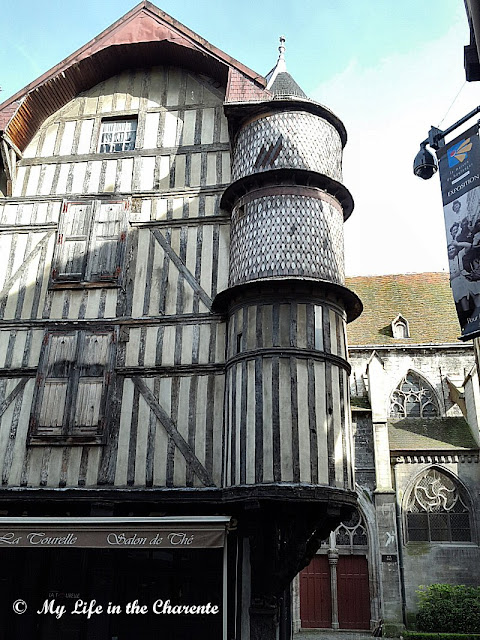 This is the house diagonally opposite the baker's house shown further down. It belonged to a silversmith, Francois Roize, who built it between 1578 and 1618, incorporating this turret to accommodate the staircase. Space was always at a premium (see last picture too) and ingenious ways were found to make the best of what there was available. 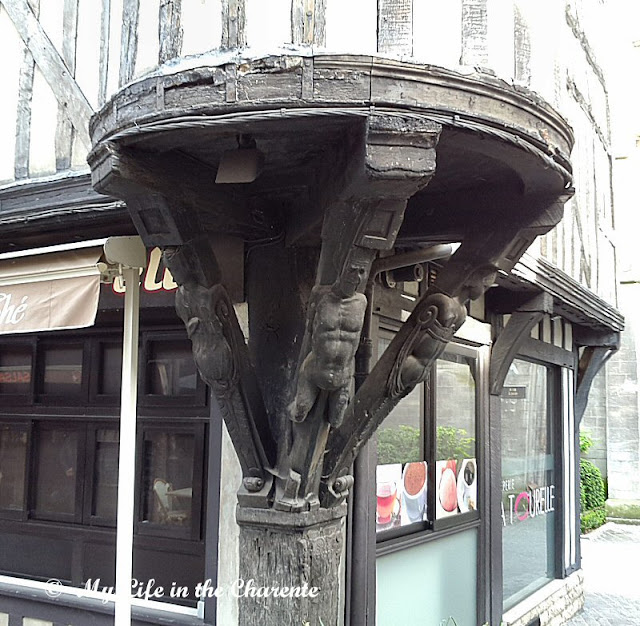 This shows the support to the circular turret above; the figures are two caryatids and a Telamon, so I'm told! 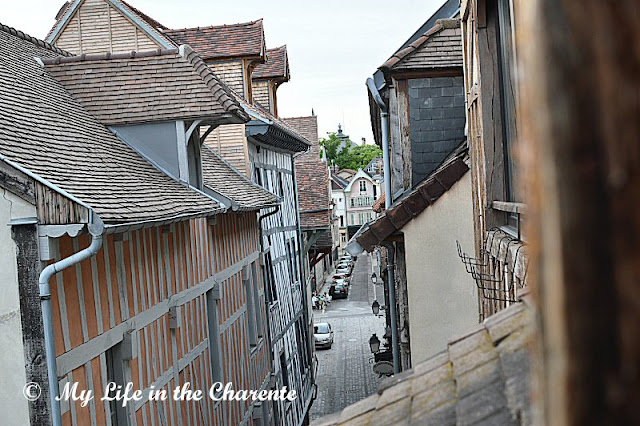 View from the hotel bedroom window. 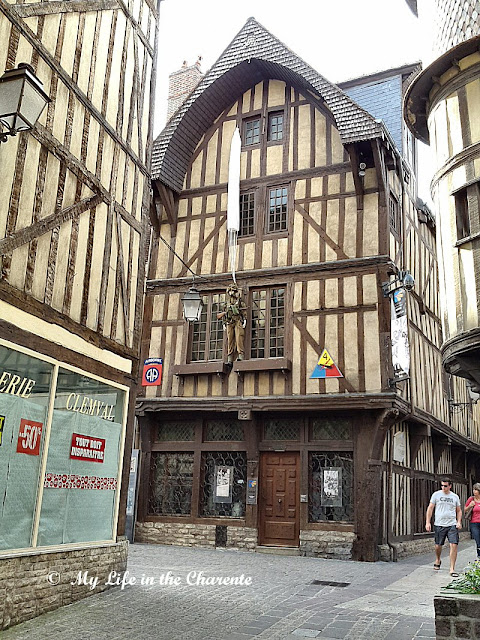 This building is known as "the baker's house" after its first owner. Note the silversmith's turret at right. The pulley at the top of the house, used to pull flour bags up to the loft, can still be seen. This house was the first in the area to be renovated, in 1964, after a long battle to prevent it being demolished! The facade is typical of building styles in the town in the 16th century. The building now houses  the cultural centre. Why is there a commando hanging from his parachute? Well, when were in town, there was an exhibition illustrating the liberation of the town by Allied forces from the Nazis in 1945. 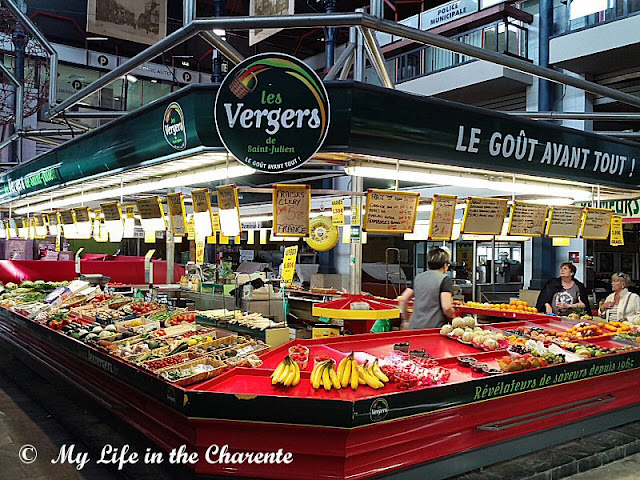 The central fruit and vegetable display in Les Halles, the food market in an enclosed building near the town hall. This was taken near the end of the day, so there isn't a lot going on! 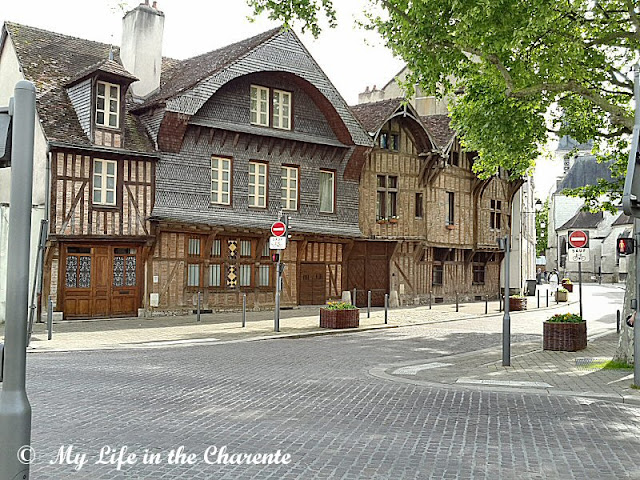 Different styles in a row, but all beautifully restored. 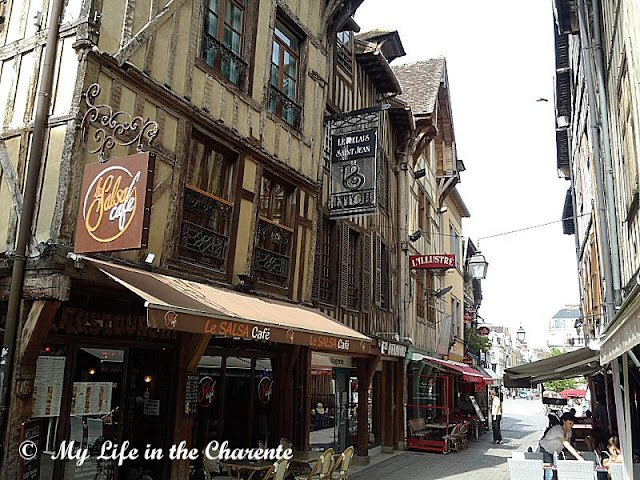 Restaurants, of which there are plenty in and around the old town. This is rue Champeaux, around the corner from the hotel. 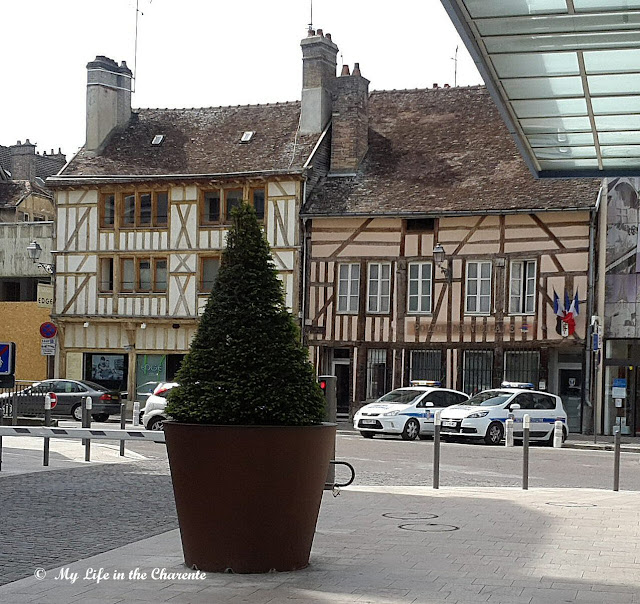 Police station - it had to be, with those bars on the windows!! And that's a seriously big pot! 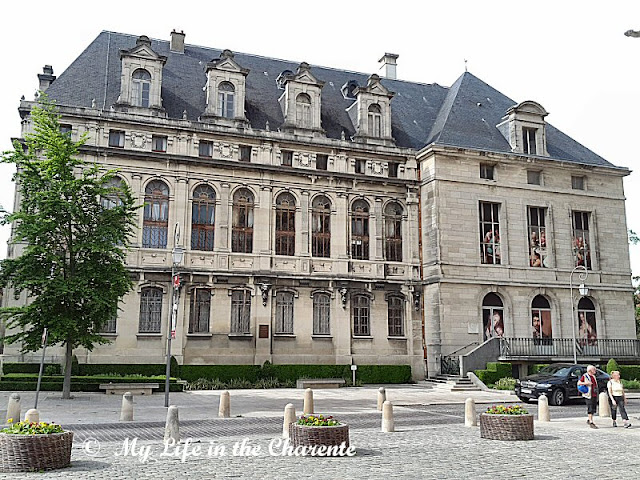 One of three museums in town, this is Musee Saint Loup, named after the bishop of Troyes, who saved the town from Attila the Hun and his hordes in the year 451 and lived apparently to the age of 95! It house exhibitions of fine art (including sculptures by Girardon, sculptor to Louis XIV), archaeology (including a gallo-roman bronze statue of Apollo) and natural history. 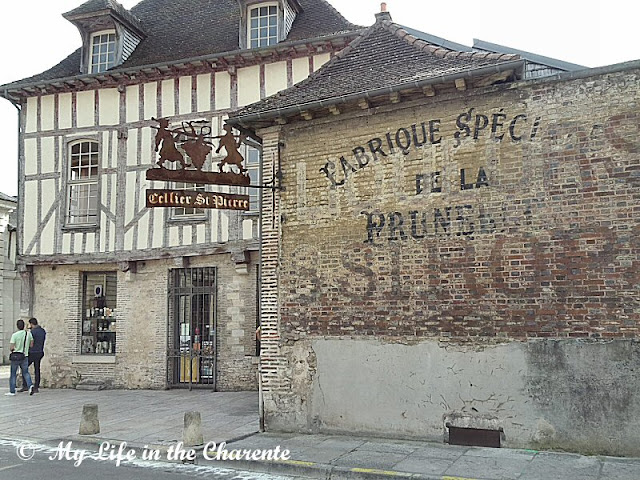 Cellier Saint Pierre, just across a square from the cathedral - this is a beautiful wine shop, which was unfortunately closed when we were there! 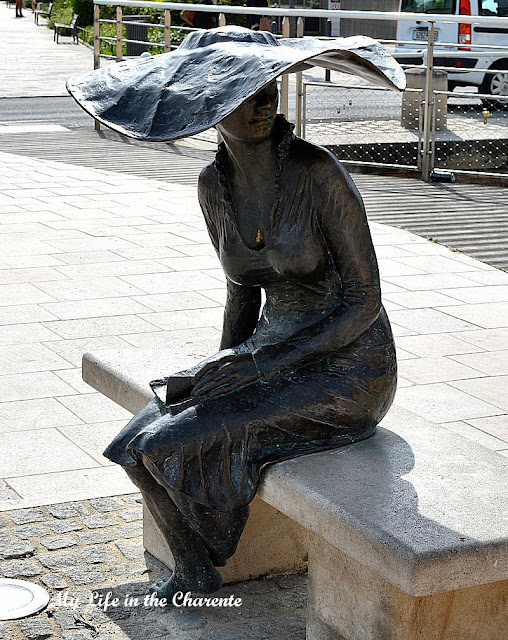 Troyes is famous for its sculptures. This bronze lady, if I remember rightly, overlooks the Bassin de la Prefecture, a dinky little waterway almost bisecting the centre of modern town. The bassin, or canal one might say in this case, seems to have been created by diverting water into a man-made loop off the river Seine (yes, the same river which passes through Paris, 180 km or 110 miles to the WNW), which flows around the east end of Troyes. Very imaginative and a memorable design feature! 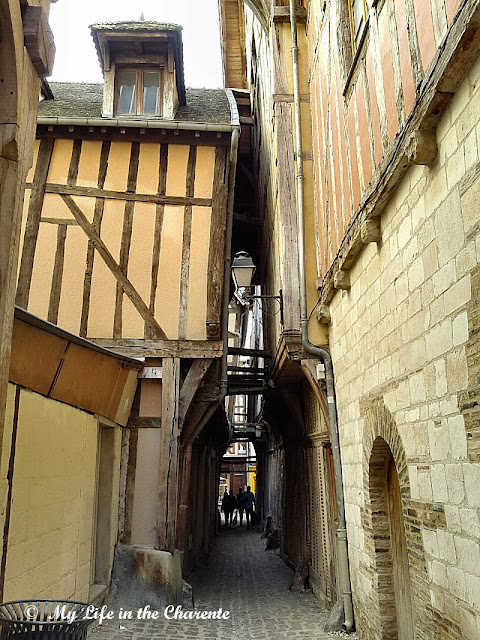 Leaning houses propped apart! The upper floors of houses in the Middle Ages were often built out over the street to provide that extra little bit of living space. Foundations were often absent or, at their best, still inadequate to support the building load.Thus, settlement of these dwellings over hundreds of years has meant that the town council has had to resort  to extreme measures to preserve them. The ancient buildings around here are all being restored and converted into living accommodation by the council.

There's a part three to come, with photos of more delights, including the cathedral.
My thanks to Nigel for all his research and help.