We  stopped for the night in Troyes last week, when returning from Amsterdam (of which more of both in the near future). The town centre is being exquisitely preserved by the town council, and walking around the narrow streets, you have the feeling that it is just as it was 500 or more years ago! 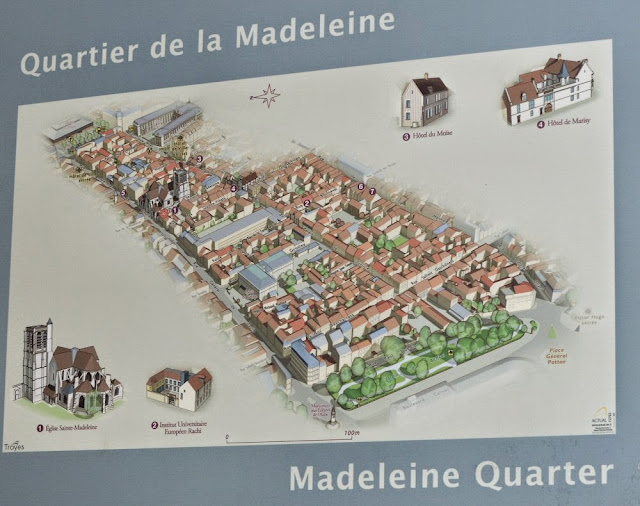 This is a information board in the town to show people this part of the town centre and how this church is tucked into the buildings surrounding it. La Madeleine was originally a rural settlement, developed along the western road to Paris, but, undefended, it was sacked by the Normans in 887. Once it had been enclosed within the city walls around 1200, the area was revived and the population swelled with craftsmen and traders, some being associated with the Champagne Fairs. The grand families living around the church prospered and when part of the quarter was devastated by fire in 1524, the houses were rebuilt in stone, and  are still standing today! There are 13 churches in Troyes centre, so a feast for the eyes of those who enjoy their architecture. but this is said to be amongst the best. First mentioned in 1157, it was added to, and altered, over the next 5 centuries. 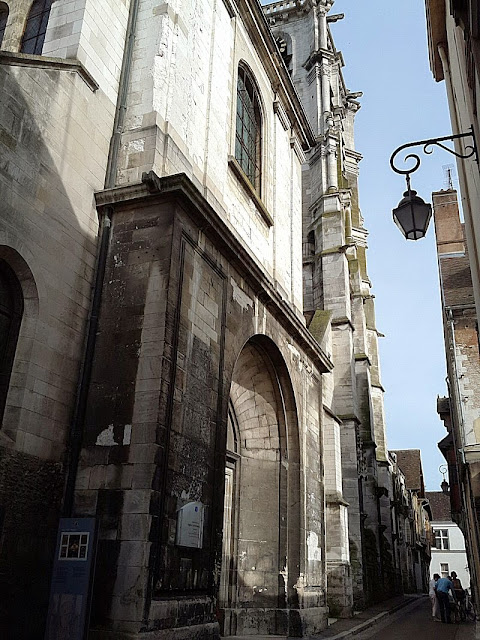 The main entrance to the church, Eglise Sainte Madeleine. The great mass of masonry is difficult to see in this very narrow street! It's very anonymous from the outside, but the inside is unbelievable! Like most medieval churches, the walls inside were originally coloured, but someone in the 18th century whitewashed the lot! 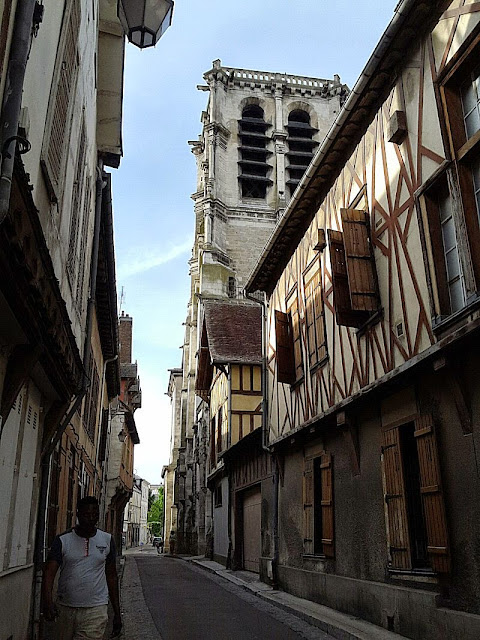 And from the other direction, with a better view of the tower, which was added in 1525. 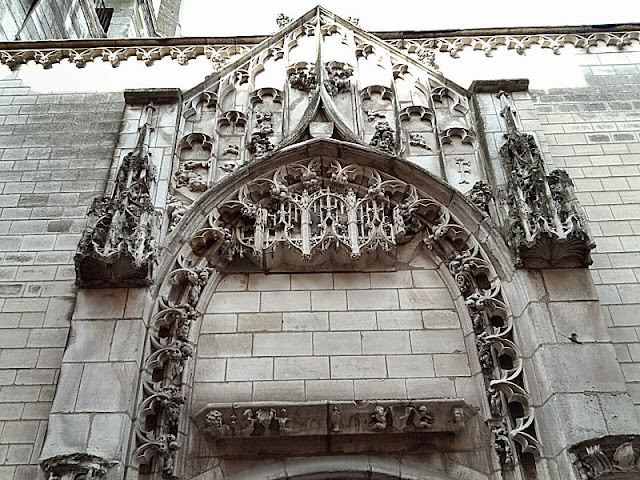 This is the portal over what they call the "small door", right next to the main entrance ! 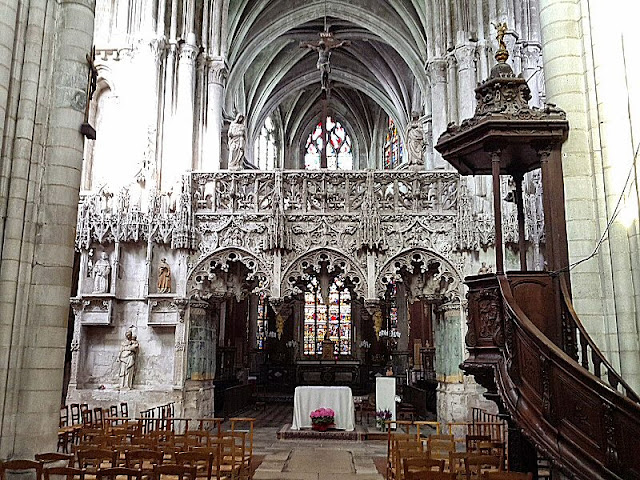 This breath-takingly carved and detailed rood-loft or gallery (one of perhaps only 12 in France) was ordered by the church clergy in 1503 and is the work of master mason Jehan Gailde, who supervised several others,  completing it during the years 1508 - 1515 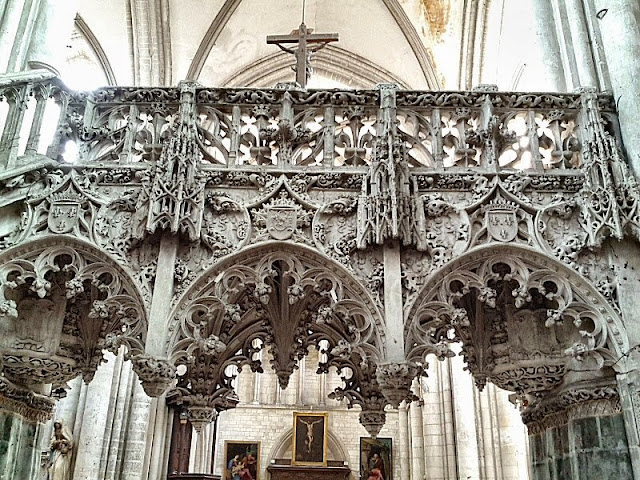 It's unbelievable that craftsmen with the hand tools of the time were able to create this work out of the local fragile chalk stone.The very rich decoration mixes floral and animal motifs, with ethereal draping, grotesques and figures in period clothing. It's quite the most rich and beautiful stonework we've ever seen, anywhere!! 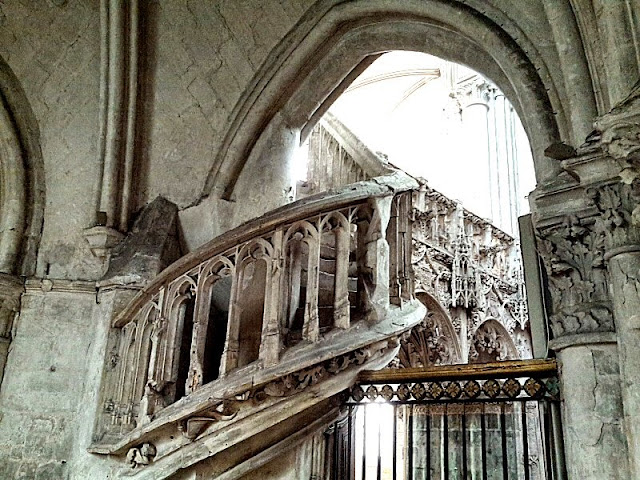 Gailde also made this spiral stair himself. The soft stone is presumably conducive to fine carving, but the authorities of today no doubt have a huge maintenance problem! 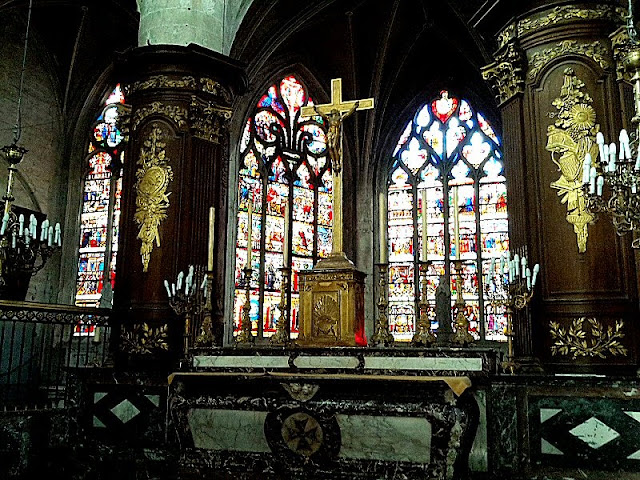 The glorious stained glass windows behind the altar are the subject of immense admiration by visitors. 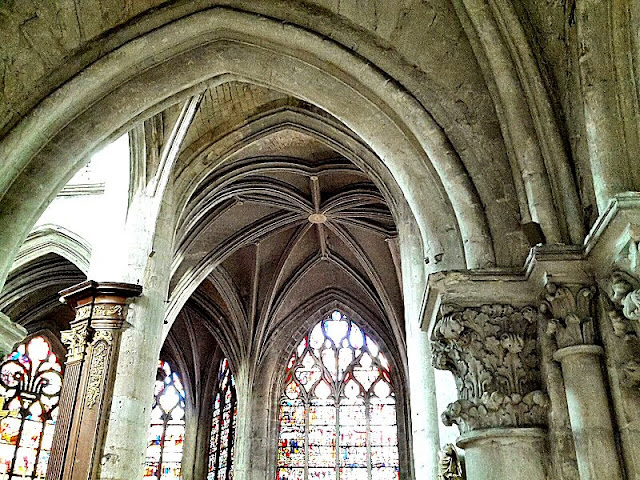 Stone roof vaulting. How the builders worked out all the angles and curves is amazing! 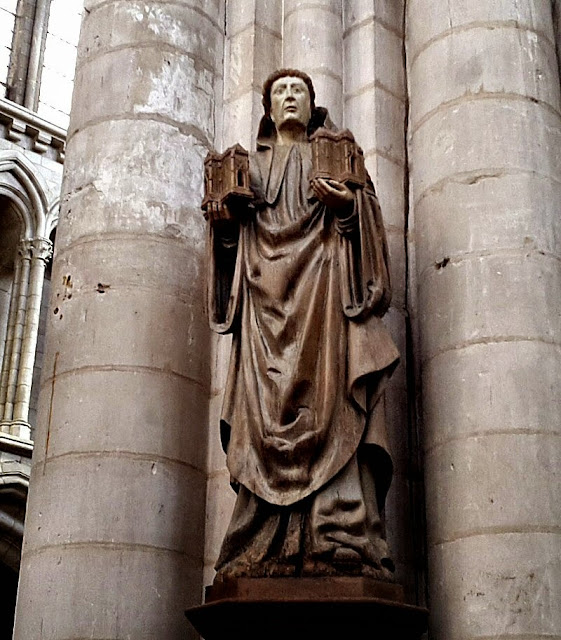 Saint Robert - a carved painted wood statue from the 1500's. Saint Robert was a monk who founded  two local abbeys in the 11th century, representations of each of which he carries in his hands. A clever way of showing his achievement.