We stopped off here on our way back from Minerve, to discover another small town, so beautiful and steeped in history! The name Mirepoix in Occitan (Oc) the local language, is supposedly Mire Peis, which means " see the fish".

An 18th century local lord, the Duke of Levis-Mirepoix has been described as an "incompetent individual" (!) but as an Army field-marshal and friend of King Louis XV, he  gained some fame by giving his name to the culinary concoction Mirepoix- chopped celery, onions and carrots (there are apparently endless variants - I'm not going there!), which is used as  a flavour base for many dishes like soups and sauces. 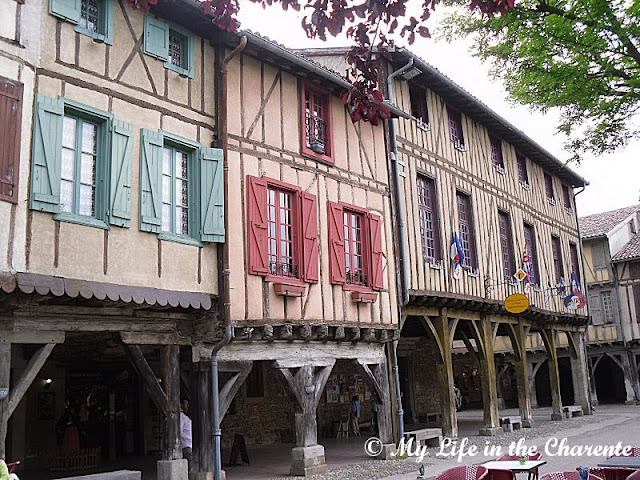 Enough of the culinary anecdotes, the delight of this fortified town of about 3,000 inhabitants derives mostly from its stunning buildings!

Our old friend (!) Simon de Montfort took the castle during the Albigensian Crusade (see last blog for more) after a siege in 1209, dispossessed the Cathar-supporting owners, and gave the town to his loyal lieutenant, Guy de Levis.

Depending on which website you consult, the original town was destroyed in  either 1279 or 1289 (town website says the latter)  after a barrage on the river Hers gave way, and the water flooded the town. Reconstruction, by Jean de Levis (son of Guy), started on the opposite bank of the river in the following year (probably 1290, then!), the streets being laid out in a medieval grid pattern. which remains unchanged to this day!

The shots above and below are of the town centre-piece, the market square or Place de Couverts, built at this time. The design of the facades allowed private habitable spaces to be extended over the public areas, providing more living space and forming sheltering arcades underneath.

These arcades  provide  shading and seating areas for the shops and businesses, including several cafes and restaurants, operating in the buildings behind. It is a delightful spot to stop for a while and have some refreshment! 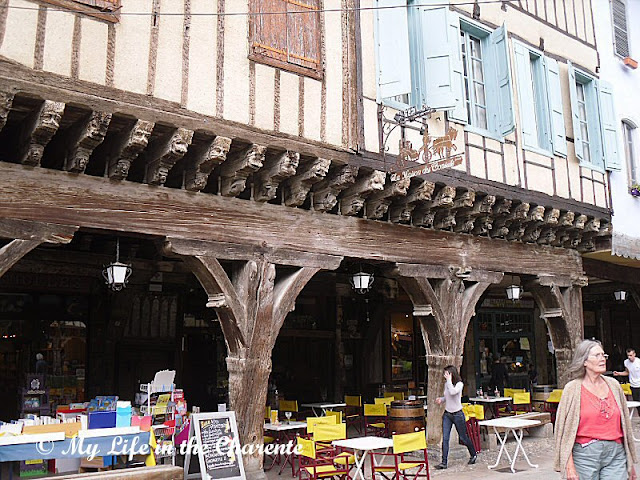 Once rebuilt, the town recovered its prosperity during the 14th century, but was subjected to raids by armed bands, who sacked the town and set parts ablaze. Thus further defences, including four big stone town entrance gateways, were constructed. 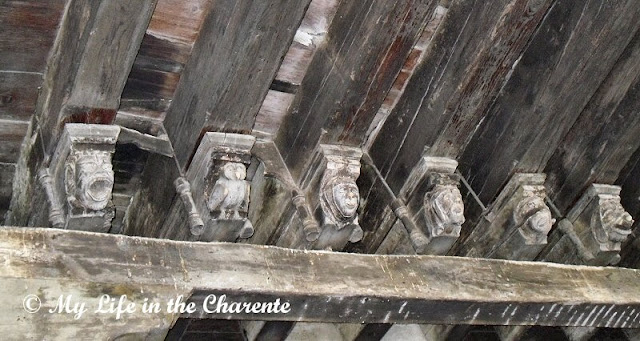 These individually carved decorative gargoyles on joist ends (I saw a note somewhere to say there are 150 of them, but that sounds far too few) are fascinating! Many have been badly damaged by the elements; the most surviving are faces with a variety of facial expressions, ranging from surprise to anguish, and can be studied for some time! And see the owl too! You can just imagine those woodworkers of old sitting carving in that square! 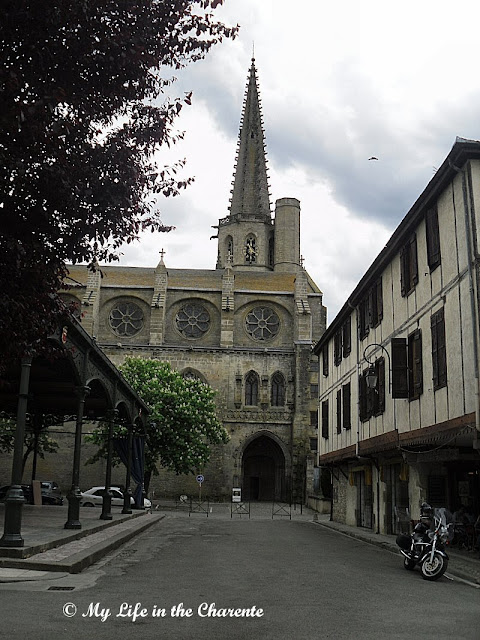 The cathedral of Saint-Maurice de Mirepoix today. Originally built in 1298 by Jean de Levis as a church, it was enlarged over the centuries. It has a 22 metre (70 feet) wide nave, said to be the  widest in Europe  apart from Girona cathedral in Spain! Once the now-abolished seat of the Bishop of Mirepoix, the cathedral is quite rightly a listed monument.

There is also a covered wrought iron market hall adjacent to the square, built in 1885 and undoubtedly replacing, a nearby sign says, an enclosed stone and timber building which was demolished at some previous time. This hall comprises a lantern light roof standing on a wrought iron industrial style structure with 16 columns, a design popular from the 1850's. The roof profile provided enhanced lighting and ventilation beneath it.

See to the left of the above photo.  For some obscure reason I did not take a full photo of it! 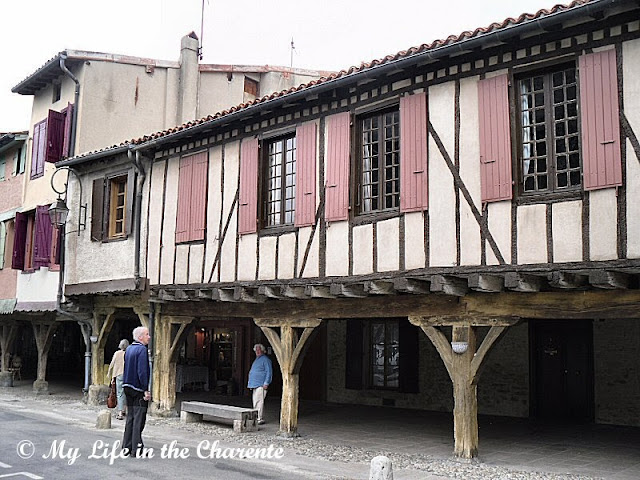 Nigel trying to count the number of gargoyles!! 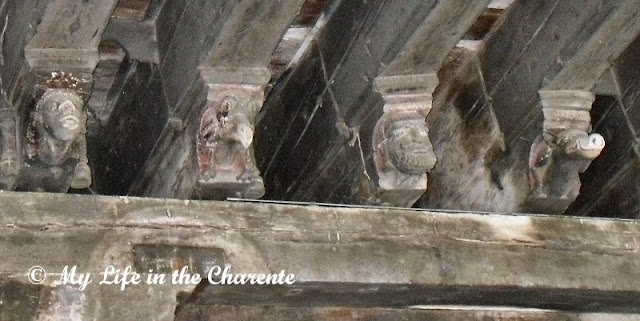 Just to think these ancient oak columns and beams are still standing today - although one can see the evidence of "running repairs" carried out over the centuries! 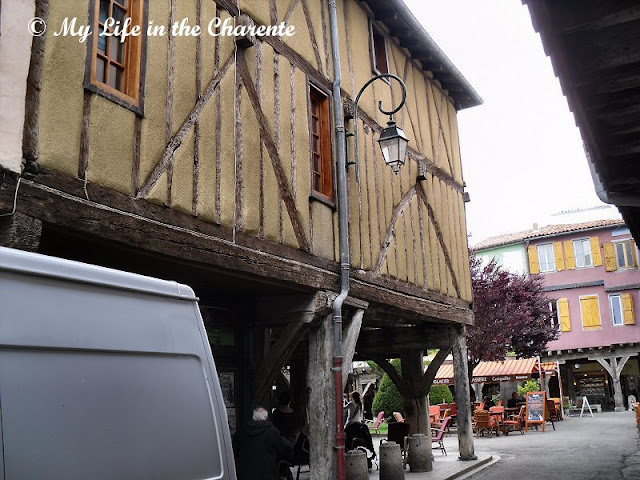 One of the streets leading into the square. 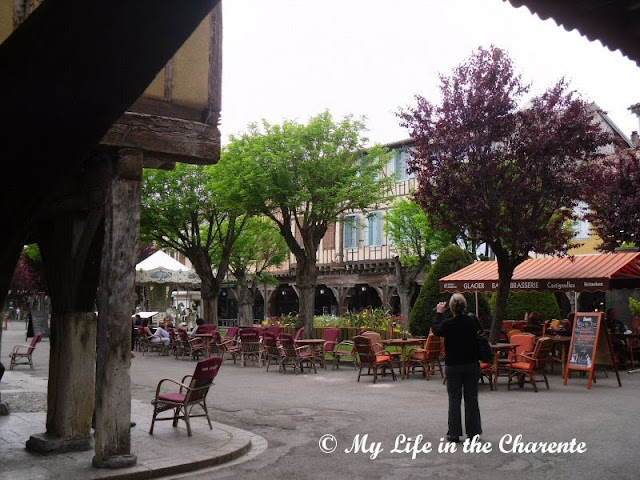 Markets are still held each week on the large grassy island in the centre of the square. 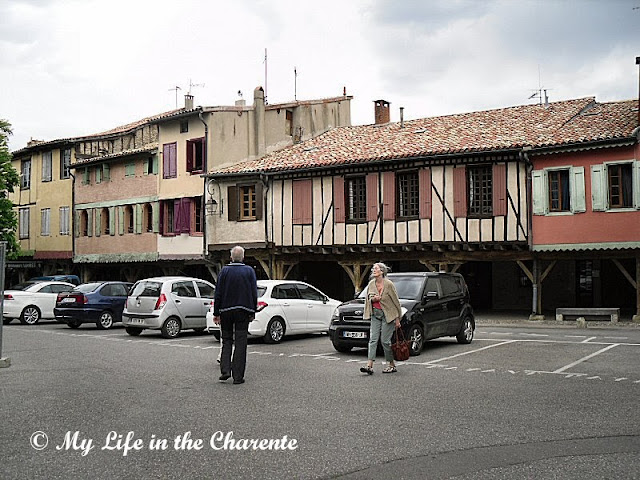 Due to its proximity to Carcassonne airport and the budget UK airlines which fly there, the Ariege area has become very Anglicised, with café signs advertising food in English and English newspapers having become quite common. Otherwise, it's still remarkably unspoilt!!!

An amazing (I think!) panoramic view of the square and whole town can be seen HERE  and is  well worth a visit. It also shows clearly the covered market.
Other sites worth viewing are HERE and HERE

My thanks once again go to Nigel for all his research and writings.