Visiting Minerve, the Cathars and meeting another friend.

Minerve is the capital of the local wine region and has been selected as one of  the Most Beautiful Villages of France (yes, another one!) and it really is!

I may have mentioned the Cathars in previous blogs and how they were persecuted for their beliefs, but they are closely connected with Minerve, as I will tell!

The history is very complex,  but Catharism was a religious movement which sprang up during the 12th to 14th centuries in areas of Europe, notably northern Spain and southern France. Cathar beliefs were a direct challenge to the Catholic Church, which they denounced  as the "Church of Satan", but it is likely we have today only a partial knowledge of their thinking, because the Papacy probably destroyed most of their writings in the Albigensian Crusade (more later!) of the early 13th century.

Pope Innocent III, elected in 1198, resolved to try to convert the Cathars to Catholicism and sent out his Papal legates into the countryside to facilitate that, but in 1208, one of the legates, Pierre de Castelnau, was murdered nearby. Innocent III responded to this crime by sending a Papal army to wipe out the Cathars wherever they could be found! This exercise was called the Albigensian Crusade, was extremely cruel and vicious, drew in people from all over France and  lasted for 20 years!

Back to Minerve....! It was one of many hill-top forts in the area, but it sheltered  a group of Cathars who had sought refuge there, so it was besieged in the year 1210 by Simon de Montfort (Earl of Leicester - an Englishman!), a commander in the Papal army. Giant rock-throwing machines (trebuchets) were used to batter down the  stone defensive walls, thus the town garrison commander was forced to negotiate a surrender after 6 weeks of bombardment, when the town water supply was destroyed. 140 Cathars were among those captured, but they refused to give up their faith, so were burned at the stake on 22 July 1208. Terrible times!

I have tried to keep this concise and hope I haven't bored you, but history is so important to this area! There's plenty more to read on the internet if you want to do that.

The village today could not be more quiet and peaceful and only residents' cars are allowed into its streets over the main bridge. One can, however, almost sense the atmosphere of violent history associated with this settlement and the surrounding deep rocky gorges of the rivers Cesse and Brian, which meet nearby. Of all of the original fortifications, only a slender octagonal tower, known locally as the Candela, survives and it can be seen in the photo below. 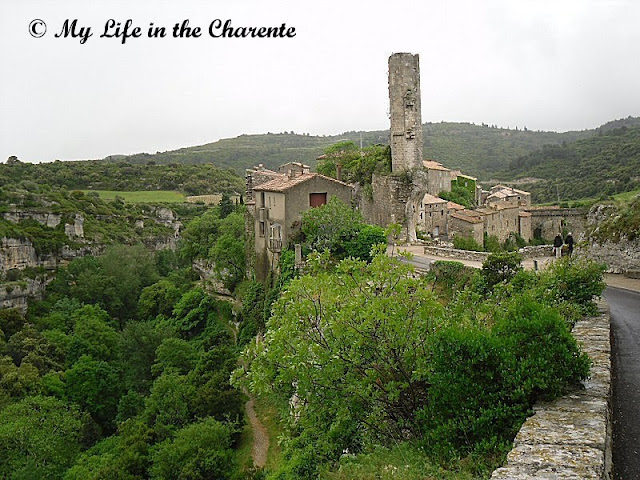 Our first view of Minerve. 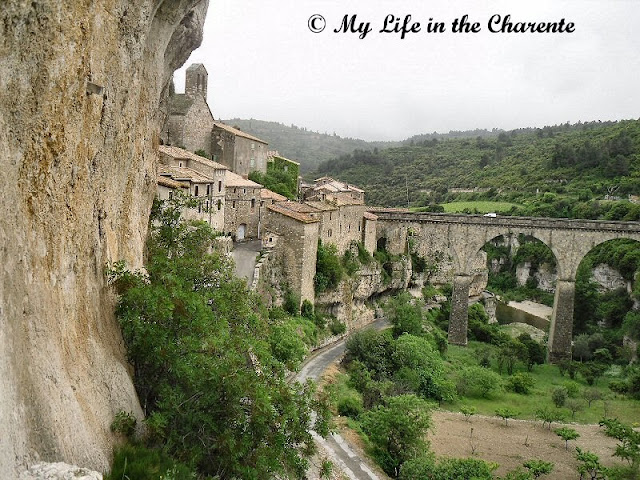 and a shot taken from the other side of the town, showing the main route over the bridge into the village. 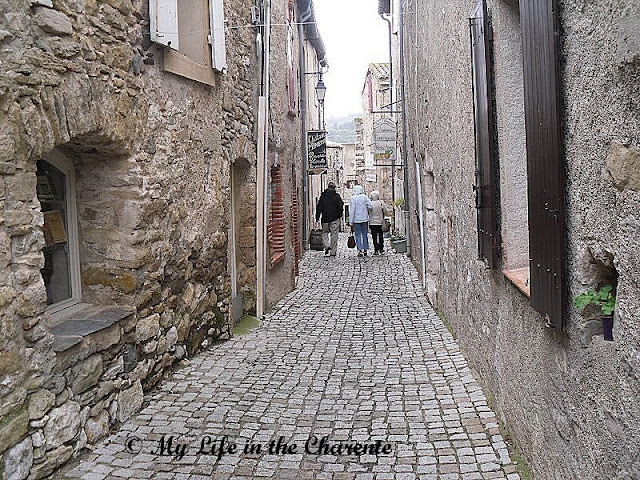 Narrow streets above and below! 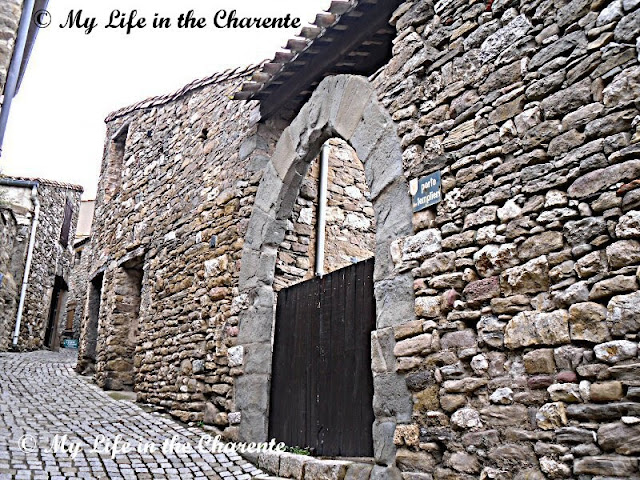 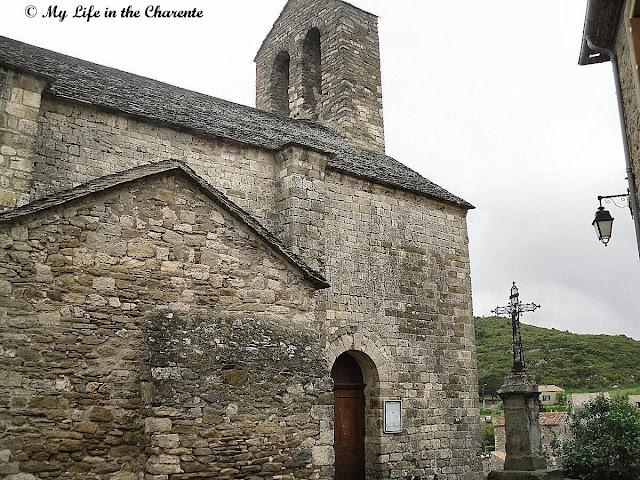 The 11th century church dedicated to Saint Etienne, but unfortunately locked up on that day. Its altar has been dated to the year 456, thanks to an engraving on one of its sides. This altar was retrieved from an older church nearby, which had been on the pilgrimage route to Santiago de Compostela in Spain. 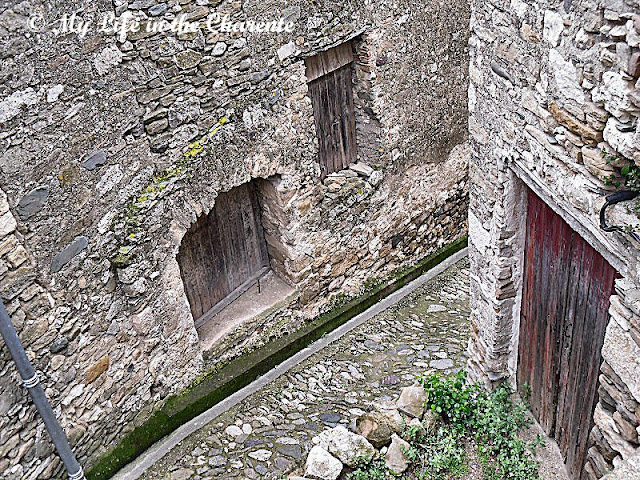 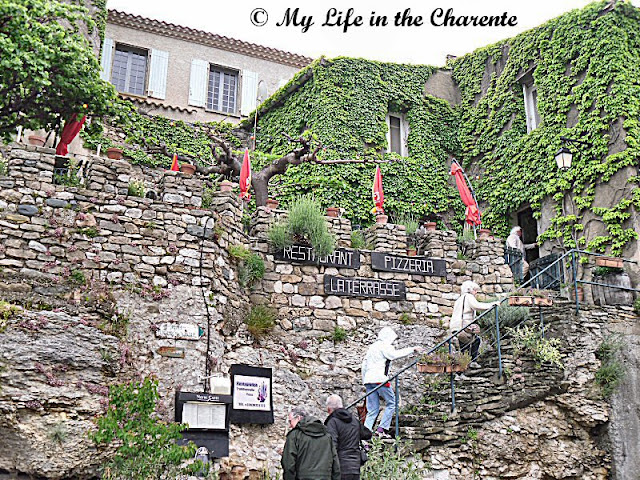 We had an excellent lunch here at the Pizzeria La Terrasse, the only restaurant open! Too cold for anywhere else to bother opening for the few tourists! 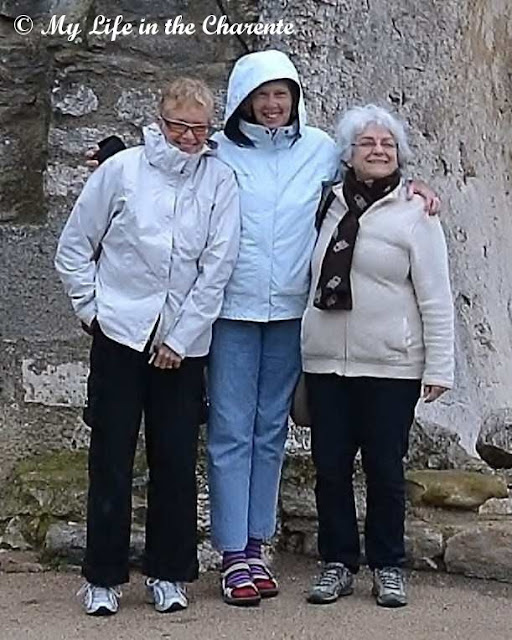 Photo credit Brendon Sweetman
As you can see it was a very cold day in May, especially on this hill-top!  Myself, Emma and Fi.  We last met at school in Rhodesia about 55 years ago!! 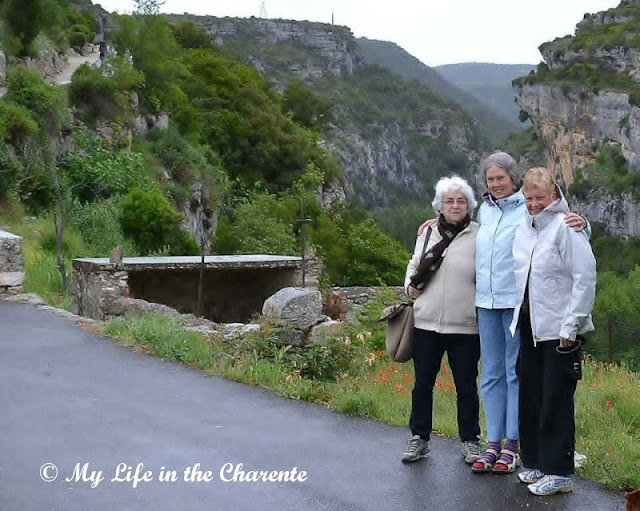 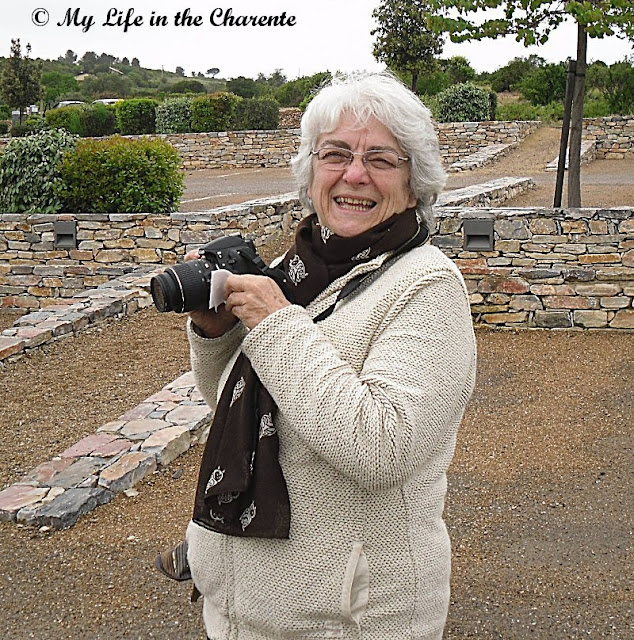 A happy and smiling Fi. 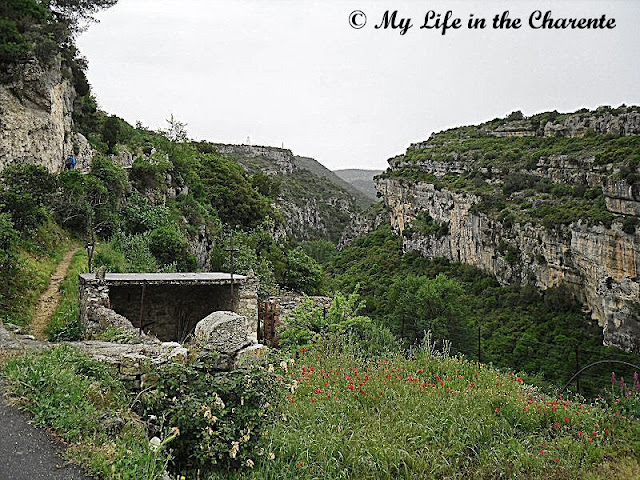 The gorge, without us blocking the view!

My thank once again to Nigel for the research and the write up.