On Sunday, I surprised Nigel with a meal that is not very common in our household and it was soooooo delicious!!   Sometime ago, I saw quail on special offer in a local supermarket, so I bought some and threw them in the freezer; four of them to be exact!  Last Sunday morning, I thought I would get them out and unfreeze them, then decide what I was going to do with them.  I had a look on the internet and found so many similar recipes, that I decided to get a hint from each one and then do my own thing!

I put the prunes in a small dish, covered them with the brandy and left them there most of the afternoon to absorb as much as possible.

I cleaned and washed each bird removing the few feathers that were still attached and then sprinkled them with freshly ground pepper and some garlic salt.  I browned them in a non-stick frying pan in a little oil, turning so all sides were lightly browned, I then added the lardons and sprinkled it all with the thyme, I cooked it all for a couple of minutes. I then lined the birds up in a pyrex dish and spooned over the lardons and the thyme. (Keep the pan for later). I popped them into the oven, covered, at 220C (428F) for 15 mins then took them out and let them stand for a couple of hours not removing the lid.  (This step may not be necessary, but I wanted to eat later and I did not want to mess around at the last minute. I suspect though this may have been what made them so tender!)

Just before serving I put the dish back in the oven at 160C (320F) to heat the birds through, while I made the sauce in the non-stick pan.  To do this, heat the pan, add the shallots, fry lightly until glassy in appearance.  Pour over the prunes and the remains of the brandy and flame, lighting carefully with a match.  Add the quince jelly, the chicken stock cube, parsley and a little water  until you have a good sauce consistency, allow to reduce a little.

Remove the quails from the oven, put 2 on a plate and pour the sauce (10 prunes for each person!) over the birds. Serve with vegetables of choice. 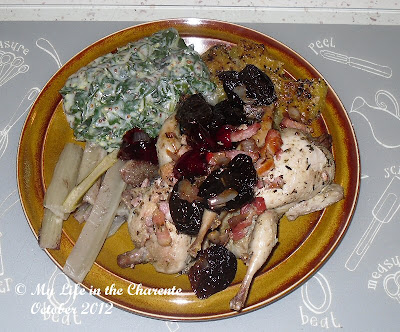 My vegetable selection maybe a bit odd, but I was using up what was plentiful in the garden!  Chard stalks pre-boiled until just soft, then put in the oven with parmesan and pepper sprinkled between each layer with a small drop of red wine, cooked at 180C (356F) until slightly brown. I left them in there when the quail went back in to heat up at 160C.

The green from the chard was wilted in boiling water, then drained and chopped.  Meanwhile I made a white sauce, added Dijon mustard and freshly ground black pepper to taste,  before I mixed in the chopped chard.


The third vegetable was a very large green tomato that I peeled with a potato peeler. It was firm enough to do this.  I sliced it, and as I layered it in the dish I sprinkled it with pepper and parmesan. It went in the oven, in a separate dish, covered, with the chard stalks and cooked for the same time.

It was very tasty and the quail were remarkably tender.  I was pleasantly surprised that we both felt quite full afterwards.