At the beginning of June, I mentioned that our old entrance gates were falling apart and that we hoped to have new ones in mid July see HERE .
Well things did not go quite as planned, but just before Nigel returned to the UK at the end of July, our artisan ébéniste (craftsman cabinet maker), suddenly arrived to measure up the area and discuss exactly what we wanted. We thought another two weeks and the gates would be in. I should know better than to expect things to arrive on time, but I finally received a phone call last week saying work would commence on Monday 23 August and it did!!. The frames are made of local oak, and the panels are made from locally grown sequoia. There is a sequoia forest that was planted 40 years ago nearby and they are just starting to cut the trees now.  Because of the weight of the timber, only the frames  were made  in his workshop and the rest of the work was done on site. 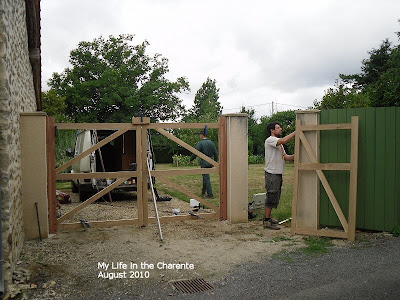 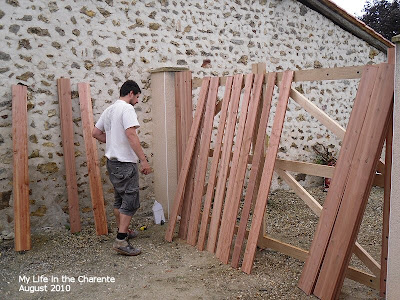 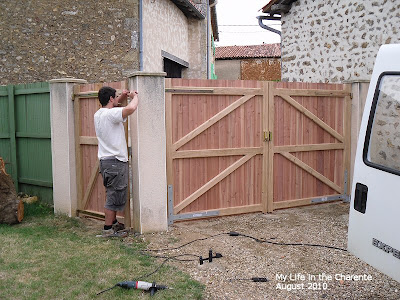 Work finished for the day, with the gates incomplete, but I was assured that all would be completed the next day - Tuesday. I received a phone call at 17h00 on that day saying "sorry he had not made it" but it would be finished on Wednesday morning instead! Temperamental artists maybe! Here is the almost completed result, which I am very pleased with. The workmanship is excellent. There was a problem with the fitting of one handle, which is to be sorted out today!! All I have to do now is paint them!! 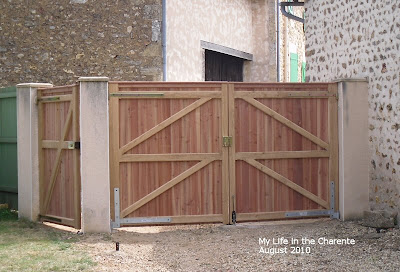 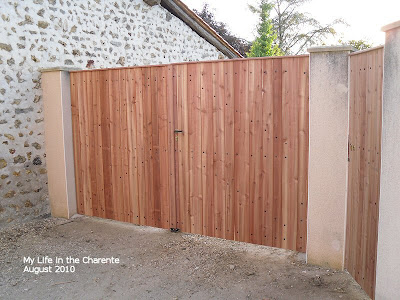 Meanwhile, I took on the task of getting the laurel hedge back into shape.  I should have taken a photo first but I only thought about that when it was too late!  Enough to say it was about one and a half foot higher that it is in this finished photograph.  I might add this is only part of it, this is probably a third of the length of the full hedge. 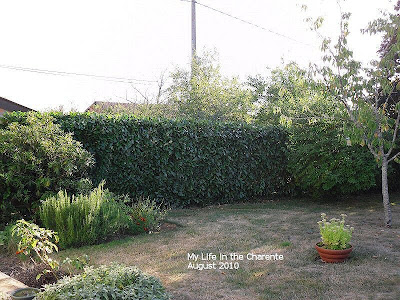 You can see how brown our grass is, due to lack of rain.  I use just enough water the keep the flowers and the vegetable garden alive.
Posted by Diane at 11:39