In a couple of hours time, I will be taking Nigel back to the airport for his return to the UK.  Today the sky is blue once more, just as it was the day before he arrived!!  During his stay, the weather has been mostly cold and wet.  The fire has been lit a couple of times and the hot water bottles came back out of the cupboard.  I know it has to be coincidence, but Nigel really seems to change the weather every time he arrives here.  Fingers crossed that he can break the spell for his return in mid July to watch the Tour de France.
I hope that by the time of his return, there will masses of vegetables ready to eat in the garden. I have to say it is looking quite promising at the moment. I just need to sort out the matter of the aphids and black fly, who seem to have been thriving, thanks to the weather of the last few weeks.
Yesterday I made some cherry jam.  Nigel did the miserable job of de-stoning for me, while I took on the easy job of cutting them in half, cooking and bottling them.  As they are eating cherries, I am not sure how much flavour the jam will have. I am sure after tasting it, I will find they there is a lack of flavour.  It will give me an idea, though, what to put in the next batch, maybe some kirsch or almond flavour - I will have to see. 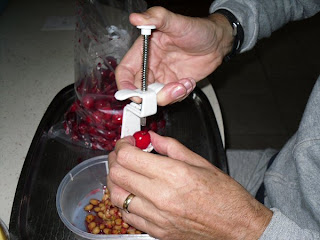 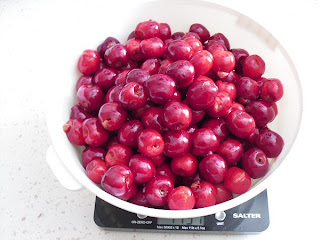 Checking the weight after the stones were removed.
There was one small hiccup in the process; while I turned my back for a minute, the mixture boiled over!  What a mess, even though I caught it quickly and very little went on the stove. 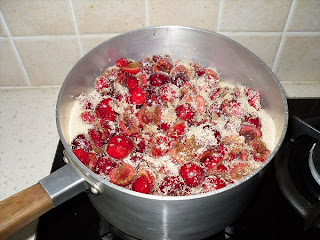 I used special jam sugar, so it was a simple recipe.  1.2 kg of cherries to 1kg of sugar.  Bring to the boil and boil for exactly seven minutes.  Pour into sterilised jars, put on the lids and wait for them to pop and make a vacuum. 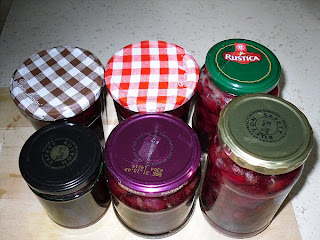