Return to the Charente March/April 2010 Part 29

March 2010
27th We were up early and packing the car with the many things we still need to move to France. As usual, some things just would not fit in and will have to wait for another trip!

We took Nigel’s car to a convenient point, so on his return from the Charente on the 13th by air, the car will be standing by for him to get home. We had an uneventful drive to the Chunnel and as we were quite early, we decided to stop at the complex nearby for some lunch. On leaving the complex we were busy talking and suddenly discovered that we were on the highway going in the wrong direction! Luckily, we were able to turn round at the first off ramp and still arrived at the Chunnel earlier than necessary, so we were offered an earlier train, which we gladly accepted!

On arrival in France we had an easy drive through to Montreuil where we topped up with fuel and from there we arrived at our friends’ place for our overnight stop at about 16h00. There was a very cold wind blowing and we decided that inside the house was the warmest place to be. After an excellent meal cooked by Michelle, we managed to get to bed just before midnight.

28th Up early again, and of course because of the clocks going forward to summer time, plus the one hour difference between France and the UK, we were up at what would have been 05h00 UK time the previous day, but in reality it was now 07h00 French time!!! Michelle kindly gave us a healthy cooked breakfast and we were on the road just after 08h30.

The drive, other than experiencing some satnav confusion in Rouen, which took some sorting out, was through light rain much of the time. We stopped at David’s just before arriving at the house for a coffee and an update on our place. All seemed to be well and we arrived to a nice warm house that looked like David had been through with the vacuum cleaner as it was very clean. What a pleasure. 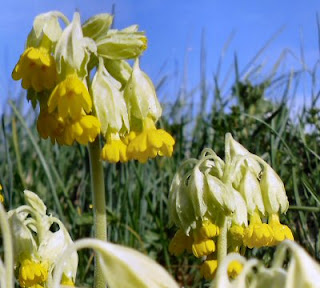 The roadsides were yellow with cowslips.
Neither of us felt very hungry so after a light supper of biscuits and cheese we fell into bed, only surfacing at 09h00 on Monday morning! Guess who must have been tired?
29th After the late start and by the time we go going it was almost lunch time. Of course most of the shops close for two hours for lunch, so we decided that shopping at the main supermarket of Leclerc was the only option as they stay open all day. Hmmmmm, we had to pick the day they were stock taking and they were only due to open at 14h00. We then decided a trip into La Rochefoucauld and a light lunch would just about use up the necessary hour before opening time. 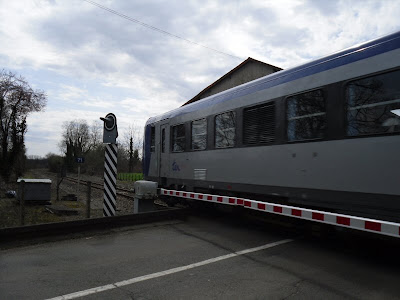 There are only 3 trains a day with one carriage and we had to find it!
Back at the supermarket we did all the necessary shopping, topped up with fuel and then back home. We popped into see Jean and Nicole only to discover that Jean, although he was OK, had written off his car! His inside front wheel had just caught the side of the road tarmac when passing another vehicle on a narrow road and this minor deviation of line managed to cause the car to flip completely over.

30th Rain overnight and still raining during the morning. We had planned to go into Chasseneuil for a few necessary items, but in a change of plan, I decided to cook the very large tongue that we had bought on special offer yesterday.

With the tongue cooked, and the weather still far from wonderful, we decided that we would go over to see Brian and Erica to deliver the few items that we had brought for them from the UK. Unfortunately they had gone out, but we were able to leave the items in a safe place.

Back home I served up the pre cooked tongue for dinner, and although I say it myself, it was absolutely delicious.  See HERE for my recipe. 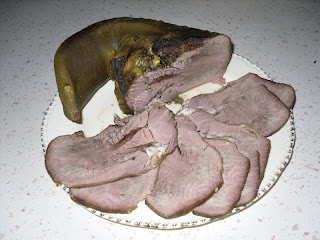 31st Surprise, surprise, it was raining again. In between showers, we both managed to do a bit in the garden and I dug up some Jerusalem artichokes to go with left-over tongue for dinner. Nigel cut up fallen branches for firewood and assembled the newly-acquired petrol strimmer; the instructions were not that explicit, but the end result looks as if it might work!! At least it will save me the problems caused with an electric edge trimmer; having four different power extensions joined together and various cables getting hooked up on garden shrubs is no fun.

1st All fools day (or poisson d’avril as it is called here) – not much change in the weather! Nigel did manage to put some teak oil on the wood for the garden seat. I put in some practice with the new strimmer, taking off the top of the very long grass in the hope that we can soon get out with the mower. However, the ground is just so saturated; we need a couple of days of sun first. 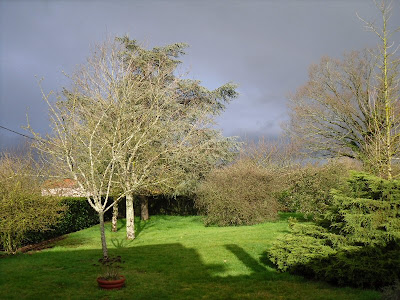 The sun trying to make its way through between the dark clouds.
David dropped in during the evening to fix our lounge light which had given up working; it needed a new part as well as a new bulb to get back into working order. Thankfully, David is quite a handy man and is always willing to try to help us out.

2nd Storms overnight, with rain on and off during the day!! Thankfully Nigel had put the wood from the garden seat in the barn overnight, so he was able to apply another two coats of teak oil during the course of the day. Apart from a trip down to the compost heap with some bits and pieces, I did not move far from the wood stove and the lounge. I did accomplish putting in a new zip into Nigel’s suit trousers but that was about it.

3rd It’s raining yet again! We did go into the local market to buy some oysters for lunch; we need to spoil ourselves in this weather! 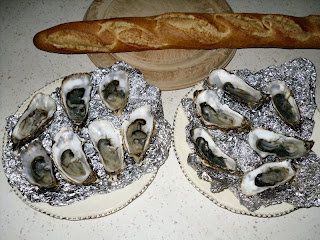 Yum Yum
They always sell a baker's dozen with oysters, maybe incase one is a not so good but I have never had a problem to date.
We also topped up the booze cupboard as we have friends around for an aperitif this evening. I will make a quiche this afternoon so we have something to nibble. For my Vegetarian Quiche click  HERE.  For my Quiche Lorraine click QUICHE
Posted by Diane at 12:17