11 - 28 August 2009
This period started with a week of re-roofing. The first part of the roof, over the kitchen, went well, but when the roofers got to the roof at the far end, a lot of rot in the chestnut wood boarding (volige in French - and what the tiles rest on) was discovered and had to be replaced. The budget suffered heavily……

While all this was going on overhead, I was busy making fig and courgette jam and the quinces were also ripening, so I would soon to be making quince jelly and jam as well. This really kept me busy and I was finding it hard to keep up with the ripening fruit. I was also picking up masses of hazel nuts, but I was having a certain amount of competition from what we were pretty sure was a dormouse. A cute little chap with a bushy tail who seemed to be carrying piles of nuts to other trees, under which I found piles of empty shells!
Photo credit see http://www.vorarlberg.at/english/jpg/dormouse.jpg
I celebrated my birthday on the 19th with a session of aperitifs at lunch time for the retired members of the community and then a further get together with ‘the workers’ in the evening. 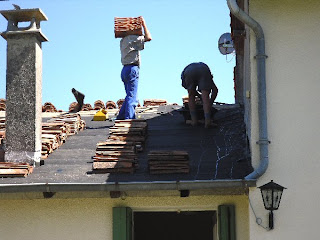 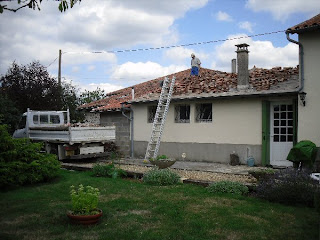 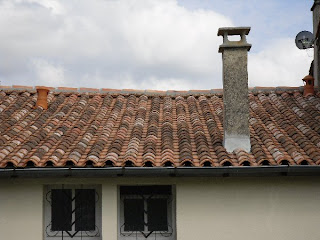 On the 20th the roof was finally finished, just in time for my visitor’s arrival. This was a long time friend, with whom I had been to school in Rhodesia (as it was then called); we had both been keen horse riders there. The next four days were spent looking around some of the local sights, including a trip to Chassenon (the old Roman garrison town of "Cassinomagus”). This is the site of the largest Roman Baths in Europe, outside of Rome. I had not seen the site for a couple of years and I was amazed at just how much more had been excavated. There are still massive archaelogical investigations going on there and it is well worth a visit. 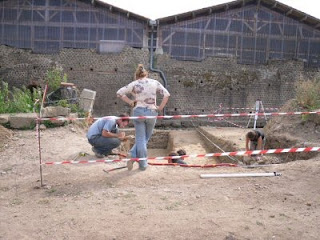 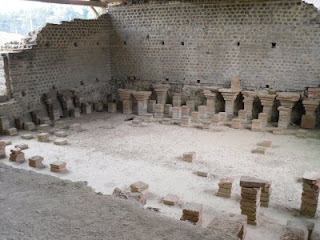 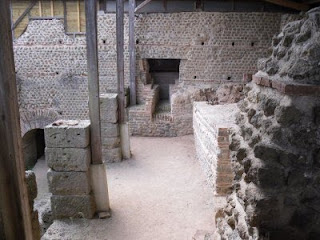 After I was once more on my own, I decided that I had recovered enough from the pneumonia attack to dig up the remaining potatoes and to cut down one of the very old plum trees that was leaning over badly. I did not over exert myself and took a couple of days to do this. David came around afterwards with his chain saw and cut the tree into log size pieces for me to use on the fire.
29 August 2009
David and Florence had their house warming today and after one long celebration earlier in the year with the French, I had a better idea what to expect. Again I was very spoilt and honoured, as other than a couple of long time friends, it was all family members who had been invited. Florence has a very large family, so there were many people there. I met David’s mother for the first time. I thought her a most delightful person, as was David’s brother Mark. Mark works for a travel company and speaks very good English; one person at least who I did not have to strain to understand! The festivities started off with punch, which David’s mother had made……..it was quite strong! With this we had a selection of quiches one of which I had made, as a contribution to the event. We then had delicious pâté and French bread, followed by roast pork and ratatouille. David’s grandmother had an overflowing vegetable garden as well! Salad came after this and then there was a huge selection of different desserts. Not forgetting numerous bottles of wine on the table. This, as before, went on over a number of hours and then it was time to clear up. I managed to do my part and wash up the cutlery etc which would be required for later on (plastic plates and cups went in the bin). David commented while I was doing this that if I did the washing up I was welcome anytime! As I had not been well, I was mostly drinking water after the one glass of punch, but David did talk me into a small beer after I had finished the washing up. Soon it was time to start all over again and we were back to eating and drinking once more. Around 20h00 it started getting quite cold as we were sat outside and I welcomed the offer of one of David’s thick jerseys. By 22h00 I was really feeling very tired and I decided that it was time for me to depart. I was told the next day though that the party had gone on until the early hours of the morning and ended up with dancing in the house. I wish I had been feeling better but I had a great time nevertheless. 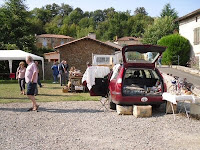 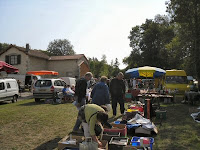 Today was the local Bric-a-Brac in Vitrac and Jean had arranged for me to have a small stall just next to him. I only had bits and pieces, for which I had no room in the house, to sell, so I was prepared to be happy with any money that I might make. I worked out of the back of the car and on a small camping table beside it. The weather was very cold early on, but the sun soon came up and eventually it felt quite warm. I met many people, both French and English, and managed to cope with the small sales quite well. Nicole had arranged a picnic lunch, to which again I was kindly invited. The centerpiece turned out to be a huge piece of beautifully rare steak and salad; with pâté beforehand and dessert afterwards, we all did very well. Need I add that there was also a bottle of wine? The icing on the cake though was that I came home €52 better off than I had started out, so it was a very good day for me.
7 – 19 September 2009
David had bought me a huge apple tree for my birthday, a present which was also thanks for the help in selling their house. As I wanted our apple trees together for better pollination, I moved the bay tree to another spot and started digging the hole for the apple tree near the others. Jean and Nicole had given me a stunning Stargazer Lily, which I had enjoyed in the house for the past couple of weeks, and so this I also planted in the garden; hopefully I will be able to enjoy it again next year. 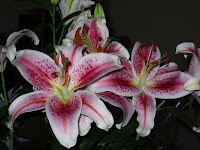 As the figs and courgettes slowed up, the quinces were now ready, so I was trying to keep up by making as much jam and jelly as possible. The latter were very difficult to cut up this year, as they were badly pitted from the huge hailstorm on 11 May, so the preparation took more time than usual.

Nigel arrived for a break on 17th and on the 18th he finished the hole for the apple tree and planted it out. While Nigel was in France, we spoilt ourselves with meals of both mussels and oysters. We also visited a selection of neighbours for some drinks. On 19th, we went to see our friend’s recently purchased holiday home, situated in a hamlet to the south of us. It was a good day although the weather was a bit off. We first went to Cave St Sornin to buy some of their excellent Charentais wine, then on to their local restaurant for lunch. In the afternoon we had a tour of the new house and we walked around the village in a dry spell to see what was available. They have a huge garden with lots of trees; someone has lots of work to do!

20 September – mid October 2009
I climbed up into the roof of the kitchen, masked so as not to cause further respiratory problems, to spread out the new insulation. Nigel worked from below lifting and passing it to me while I spread it out. I remember doing this in one house in South Africa and I itched for days after; the French insulation thankfully did not cause this problem. 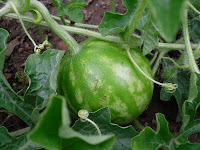 The pumpkin and water melon from the garden were quite delicious. 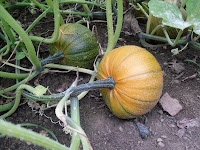 I experimented with a sanglier (wild boar) casserole, using a piece of meat that Nicole and Jean had kindly given us. Nigel cycled a couple of times; I was still not allowed to exercise until I had further x-rays to check my chest was clear. All the rotten wood that had come down from the roof was cut up to go on the firewood pile. We composted the asparagus and on the 26th Nigel returned to the UK.
I spent the next couple of weeks generally tidying up, making jam and digging over the garden. David came to cut the laurel hedge for me as I was worried about dust getting into my lungs. I dug up the remaining beans, pumpkins and water melon and the residue went for compost. 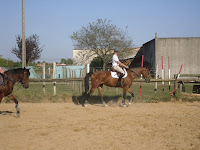 On 30th I picked up one of our young neighbours to take him to his riding lesson and on the way there was an almighty crash from the back of the car. Looking out of the rear window, I watched the silencer bouncing down the road behind me! I only had a couple of weeks before I left to return to the UK, so something had to be done about this quite quickly. Jean came to the rescue and spoke to his mechanic who repairs not only his cars but his tractors as well, so on 6 October I had a brilliant temporary repair done, for the princely sum of €20. After sorting everything out and preparing the house and garden for winter, I drove back to the UK in mid October, leaving David to keep an eye on everything for us.
We return to France 27/28 March 2010 and I hope that by the beginning of April I will have the internet connection restored, so I can keep this blog up to date. Watch this space - I will be back!
Posted by Diane at 13:14

Labels: Chassenon, Home and Garden, Restoration, Round and About, Vitrac Saint Vincent, Wildlife