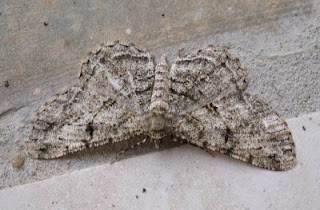 Nigel and I had a fairly quiet first week; we cycled a couple of times and spent time watching the Tour de France. The weather was good so we both managed to get a bit of a tan later in the afternoons.

14 July 2009
Bastille Day arrived and the TDF was setting off from Limoges. We packed up a picnic lunch and a couple of stools and made our way towards Saint-Priest-Taurion. We arrived early enough to park our car not too far away and then we walked down to the village and made our way east along the D29 to the first minor (category 4) hill of the day. It was not long before the crowds arrived and soon after the publicity caravan passed through, throwing out samples of various items. One truck passed and the guy threw a cap to Nigel shouting out “this is for the tall man”. There is always a rush by everyone around to pounce on the samples as they are thrown out, but this time the cap reached Nigel with no competition. 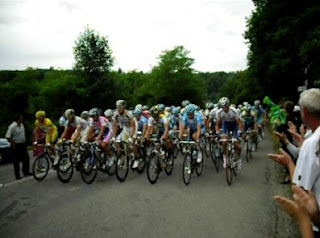 We managed to collect a few items including a bag, into which everything else got squirreled away. The caravan over, some of the crowd dispersed, but the diehards stayed on to watch the Tour fly past. We had the camera ready and I have to admit to not seeing much until I actually played the film back. The first four riders came by about 30 seconds ahead of the peloton and then suddenly they were gone and it was all over. When I did play back the film (in slow motion) I was happy to see that I had in fact managed to get Lance Armstrong on it. It was his first return to the Tour since 2005, when he had his last ride and win. (The pictures were mostly on video, I have downloaded the main peleton passing below

On the 15th we picked up Octavie in the evening and went up to David and Florence for aperitifs. Nigel and Octavie were taken on a tour of the new house and we had a very pleasant drink and snacks sitting outside in the sun admiring the stunning view. 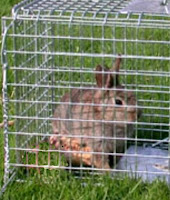 The following night Brian and Erica came to dinner and while I was in the vegetable garden deciding what to pick for the evening, I saw a baby rabbit who was happily munching away at our beans!!  I successfully caught one which David kindly took to work with him and released it 20 kms away!

We bought all the roof insulation for the passage, bathroom and kitchen ready for the arrival of Jean-Paul next month and the full roof repair. The insulation in the passage and bathroom could only be done when the tiles were removed as there was no trap door. The plan was that they would take off the tiles then I would crawl in and replace the insulation.

On the 20th we went to Jean and Nicole for an aperitif at lunch time and then in the evening, David, Florence, the kids and Octavie came around to us for drinks and snacks. The next day it was back to the airport for Nigel and his return to the UK; how the time flies when we are together in France. He left just in time to miss the big storm overnight, but there was no damage and the drains coped with all the rainwater.

21- 30 July 2009
I fenced off the beans to try to prevent any more disappearing into the little grey bunnies; I had by now seen 3 at one time! David and family were about to take their annual holiday, so I collected the keys from their house to allow me to go up and feed the two cats. I planned to cycle each day to feed the cats and then take a shortish circuit home. If I was cycling every day, I decided that around 15kms per day would be enough.

I managed to cut the hedges on two sides of the garden, but the third side I planned on doing closer to my return to the UK. This was the side occupied by a laurel hedge and the boundary with the difficult neighbour, who kept complaining about the height. I had no intention of cutting it as short as he wanted!! I like my privacy. 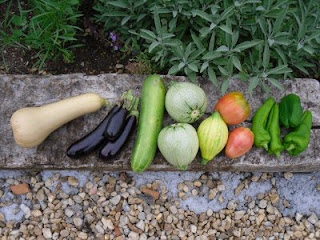 I had so many courgettes, that I tried making chutney, pickles and jam. The chutney took too long, so I probably will not make that again, although it was very nice. The pickle will definitely be made again; it was delicious as was the jam. For my recipe for courgette jam click HERE.

The evening of the 30th Jean came around to tell me that he would start the roof 10 August. We had an aperitif and while Jean was there I had to go and put on a jersey as I was cold. He was very surprised and remarked just how hot it was!

31 July 2009
I had a terrible night with chills and then hot flushes and I woke up feeling terrible with a bad pain in my back. I took the car to feed the cats and then came home and put myself to bed for the day, in the hope that whatever I had, I could just sleep off.

1 August 2009
I woke up feeling worse than ever and I suddenly realised the probable cause of the pain. I had gone down with pneumonia when I was cycling the End to End (Lands End to John o’ Groats) in 2004 and although this pain was in a different place, it felt exactly the same. I literally dragged myself out of bed, put on a track suit and made my way into the doctor’s surgery, feeding the cats en route. The doctor took one look at me and realised just how ill I was and his first thought was to send me to hospital. I talked him out of that, but only on the condition that I could get someone to take me to Angouleme for x-rays and if I thought I could get someone to keep an eye on me at home. The doctor phoned Brian, who dropped what he was doing and came over and immediately took me in for x-rays and onto the chemist to collect the prescription. We arrived home to find the neighbour down the road waiting for me and asking if there was anything she could do. News travels fast in a small hamlet and one of the other neighbours happened to be in the consulting room earlier. By mid-day, I was back in bed with all my medicine next to me having seen the doctor, had x-rays and all the results. The French health system certainly works very much better and faster than the good old NHS!! (I have now as I type this, waited 5 months to see a physiotherapist in the UK under the NHS!!!)

The doctor phoned me in the evening on my mobile, which was next to the bed, to see how I was and he popped around the next day (Sunday) to check up on me. I phoned David and he arranged for his mother-in-law to feed the cats for the following week.

The following week was just a blur and I left the front door unlocked so the neighbours could pop in from time to time. Each and every one of them helped one way or another and also did shopping for me towards the end of the week, when I needed a few things. The doctor either dropped in or phoned every day; I was certainly in no danger of not being looked after properly and thoroughly grateful to the doctor and the very kind neighbours.

8 – 10 August 2009
This was the first day that I got up for any length of time, and David came round to see how I was, as they had returned from holiday the evening before. I took a quiet walk around the garden and saw that my first butternuts were ready for picking. The following week was very relaxed and I took it very easy – doctor’s orders! Nigel had previously said about coming over, but I could not see the point as I would have been very bad company. He was booked to arrive 17 September and I said that it was much better he arrived when I was feeling well enough to appreciate his company. 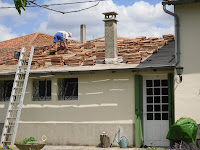 Jean Paul arrived to start the roof 10 August and as it was impossible for me to climb around in the roof to do the insulation; he took that job on for me as well.
Posted by Diane at 17:07