This post, and the next, will chiefly appeal to classic car fans, but due to its longevity, this motor sporting event  is such a fundamental and important part of the year for the city and its people (they are named the Angoumois), I hope that every reader, car fan or not, will find something of interest in it! Below is this year's poster for the event, which has been held every year since 1939, interrupted only by World War II. That's quite a record! 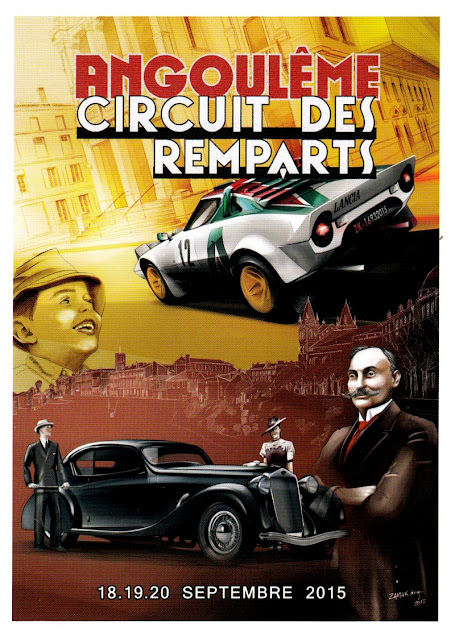 Signs like this below are erected on every major road entering the city. They set out brief details of the activities, held over a long September weekend from Friday to Sunday. The events  comprise a Concours D'Elegance on the Friday evening, a (fairly gentle) rally on Saturday (because most of the cars are old and/or valuable!), with the grand finale on Sunday being flat-out racing around a street circuit in the old town - all closed to normal traffic, of course! Participants often come from far away in their enthusiasm to participate in one or other of the above; many are French but a large contingent comes from the UK, as you will see. Without them, I felt that the event would be much smaller and much the poorer!

A beautiful 1939 Alvis 4.3 litre drophead coupe below, driven all the way from England by a mature gentleman and his wife! This car won the open-top class in the Concours, a competition in which cars (and some motorbikes), divided into classes, are judged by a panel, for their condition, style and the way in which the driver and passengers are attired to match the looks and age of the car! The contest here is all fairly light-hearted, but the long and unseasonably cold and rainy evening must have tested the patience of the entrants! 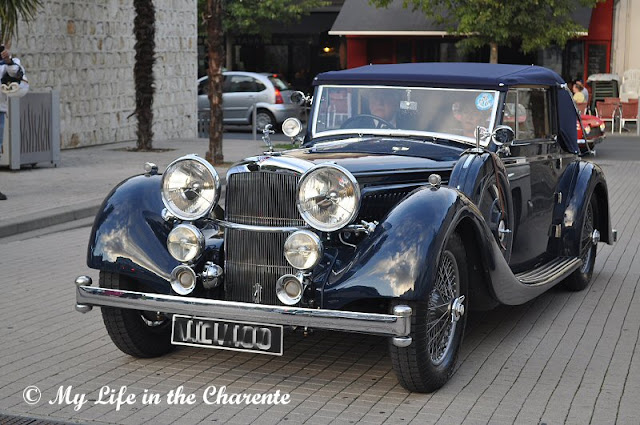 The Alvis was snapped in daylight, on its way to the evening event, but I found it very difficult to take shots of many of the entries on the judging ramp due to the artificial lighting set-up and the intermittent rain squalls, so I only have two other class winners worth showing! The car below is a Porsche 356C from the mid '60s, cleverly  decked out in a winter sports mode. The engaging boy (on the right) throwing fake snowballs at the crowd must have added a few points to the car's score! 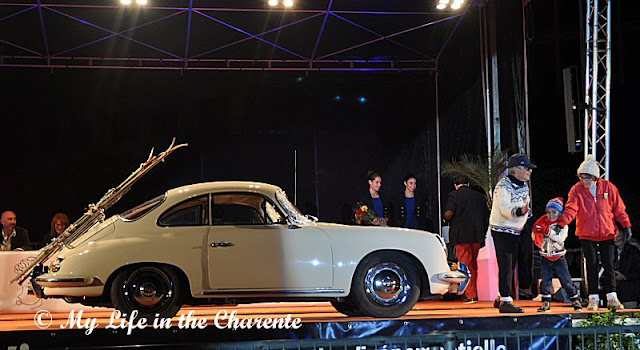 A host of vintage motorbikes below, mostly French, with the class winner being a teenager who had rebuilt his vintage bike himself!

After a late night with the Concours, the car rally started early on Saturday morning, following a 180km (115 mile) route around the local countryside, taking in sunflower fields and the extensive estates growing grapes for wine and Cognac (that famous town is not very far away). There was an official entry of some 300 cars, of which only 200 were in the programme, so that made identification difficult for us! The lunch  break was in Jarnac, a small town SW of Angouleme, so we headed there to get some shots of the competitors as they drove in from their morning's challenges. The whole town came to a standstill and streets were gridlocked as many locals arrived to show off their own oldies. The gendarmes battled valiantly to keep the traffic moving!

Of the hundreds of cars milling around, here are a few which caught my eye, illustrating the wide spectrum of motor transport developed in the middle years of the 20th century. The unusual car below is a Citroen-based Lomax from the '70s. Not so good to look at as the much earlier English Morgan 3-wheeler, I reckon! Still, the owner is obviously proud of it! 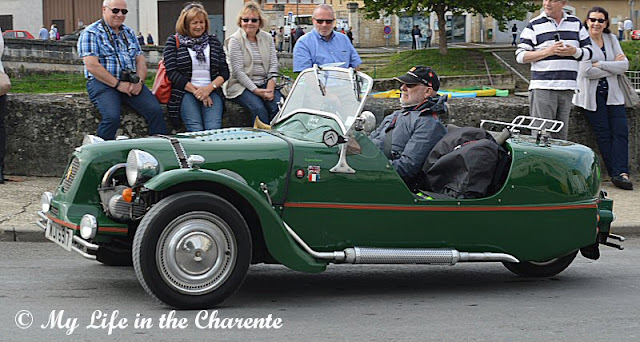 A stunning, rare and  valuable Bugatti type 35B below; more of a racing car, really, so the owner was very courageous in undertaking the rally day, just ambling along country roads for hours! These cars were produced in the mid to late 1920s and powered by 2.3 litre straight eight engines producing up to 130 horsepower. You'll need to find around £500,000 ($US750,000) for some examples, but this one would be out again the following day for the races around the town! 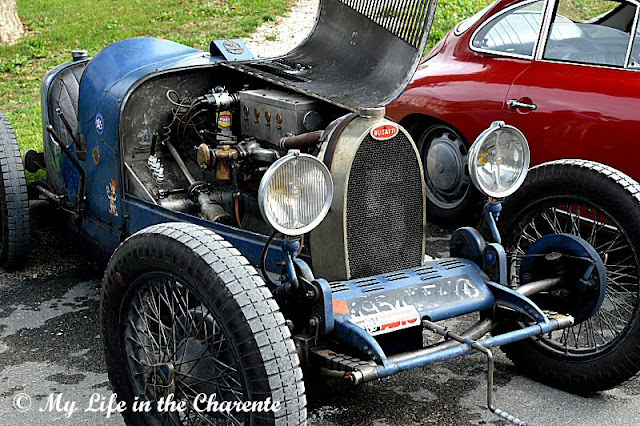 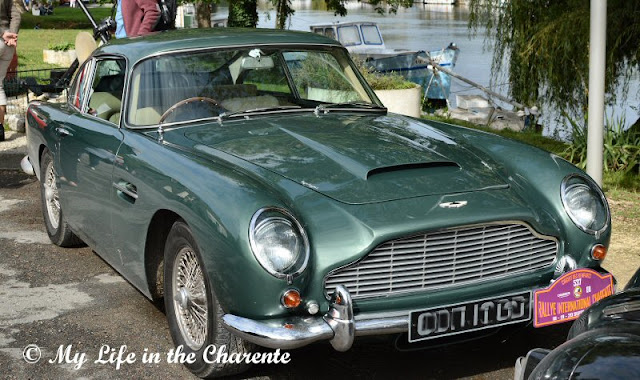 Below a 1920/30s Bentley sports, again , all the way from the UK, but not being an aficionado of the marque, I'm not sure exactly what it is! 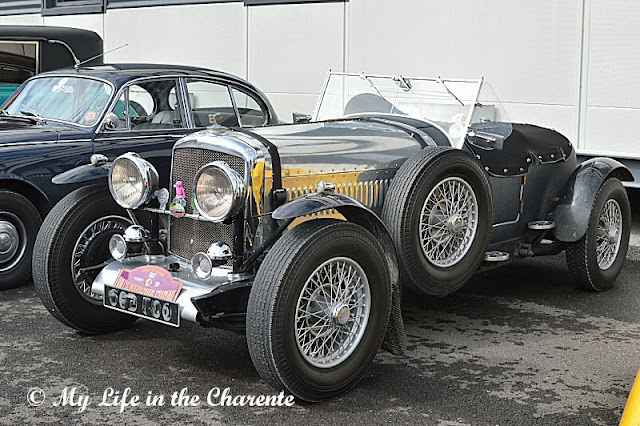 Chenard Walcker, a rare French make, was manufactured in the '20s and some cars were built for racing. Indeed, there is an example in the Le Mans motor museum. Cars were built into the '30s, in association with the better known Delahaye brand, but after that the factory apparently closed down. This is French owned, as is the Citroen further below from the same era. 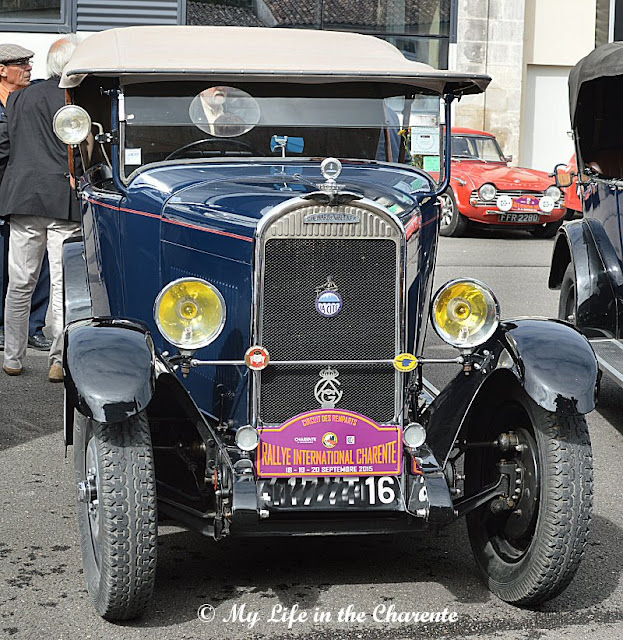 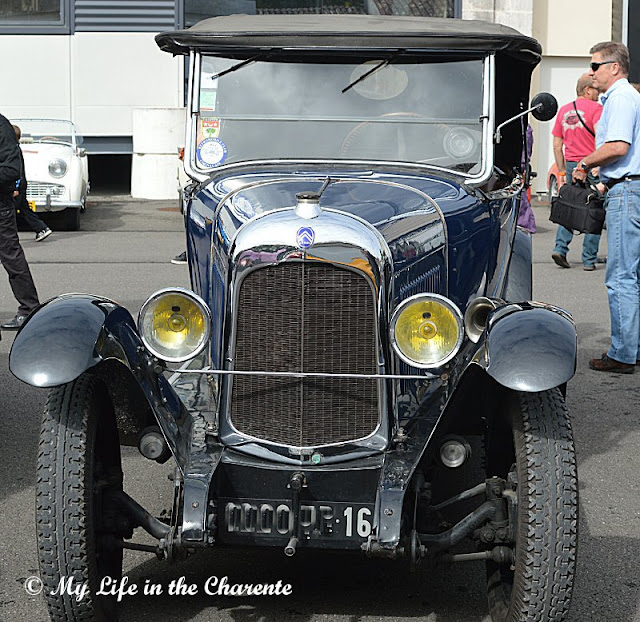 What looks below like a American Willys Jeep, seemingly converted for use by the French police. It didn't have any rally number plates on it, so maybe it was being driven around by some locals just displaying their pride and joy! 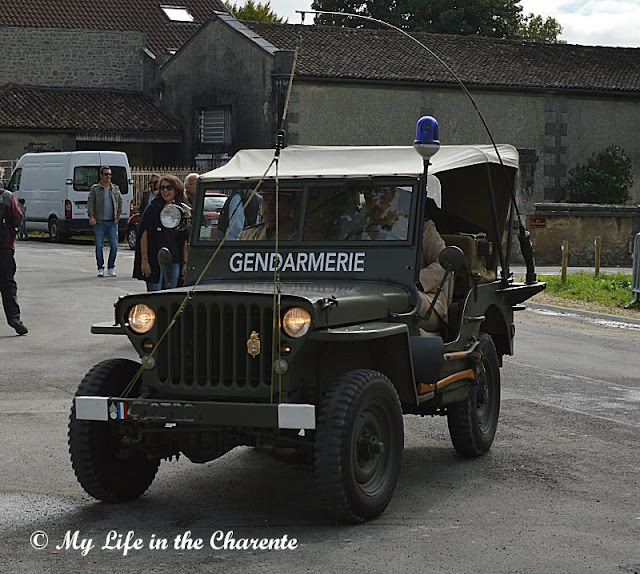 A Jaguar XK120 roadster, the first of their beautiful post-war XK series cars. The body styling caused a sensation when the car was introduced in 1948. Another car which came all the way from the UK. 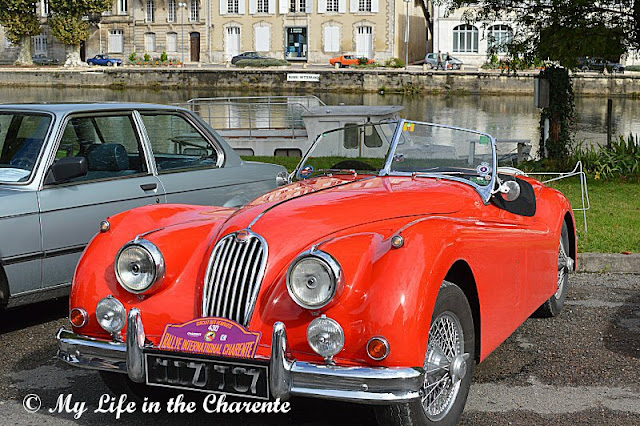 This next one, again from the UK, possibly an MG M type "Midget" from the 1930s, fitted with a supercharger to improve performance. It  only had drum brakes to help the driver make it stop! 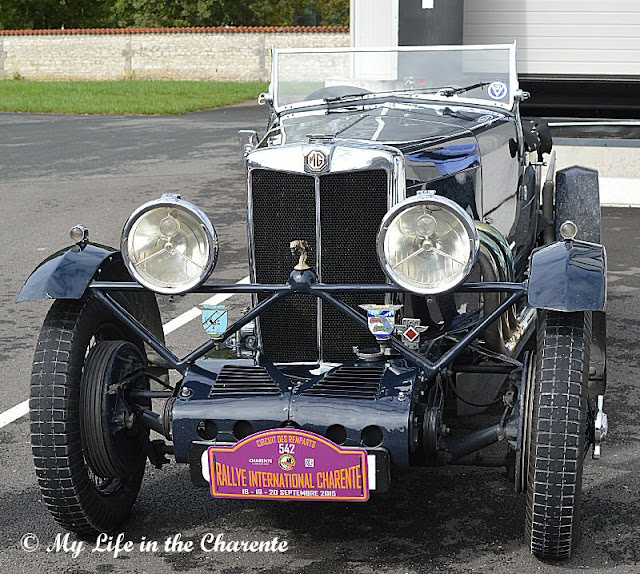 Below a local Peugeot 301 saloon, of which 70,000 were produced between 1932 and 1936. Its 1500cc engine helped it achieve 80 mph and it was one of the first cars to be designed with independent front suspension. 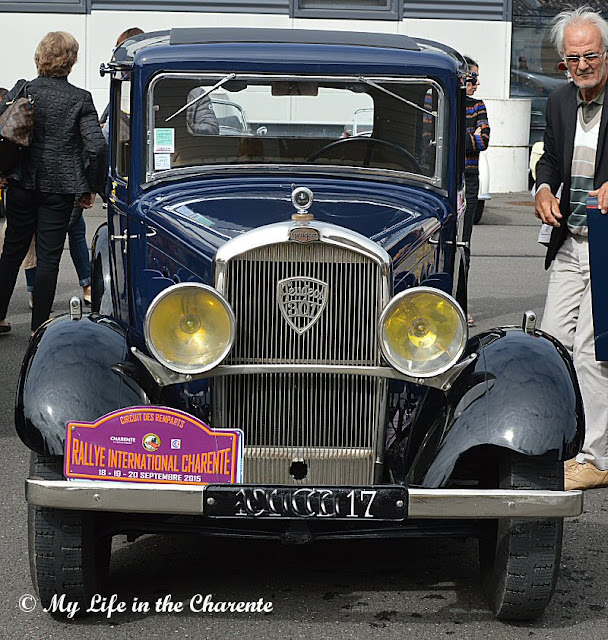 And last but not least, a well-restored Porsche 356 cabriolet from the mid 1960s. I seem to remember this particular car came from Holland, so quite a long drive in a 60 horsepower, 50 year old car! Don't miss the forthcoming part 2, the exciting race day! 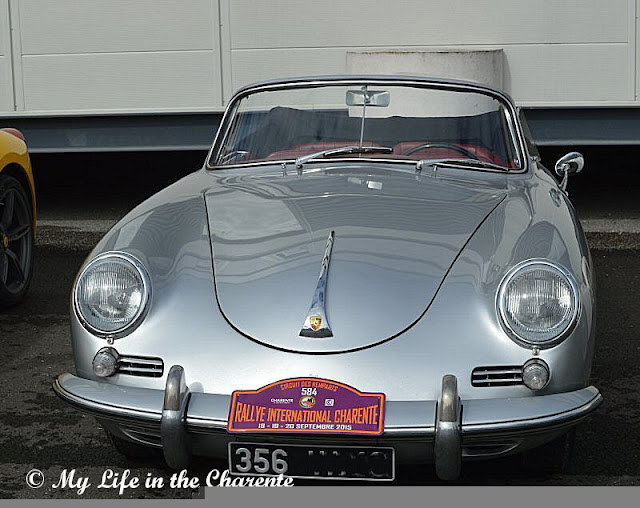 Thanks Nigel for your research and help again.