On friday night, we had a dinner party at home.  We had invited friends who have done many favours for us in the past, but because of my cough, the event had been postponed; however, I reached the point where, cough or no cough, I decided that we simply had to start living again!   I tried to make the menu as simple, but as tasty as possible.  As usual, the camera was forgotten at critical moments, but I did remember to take photos from time to time!!
We started with home-made celery soup; I used celery from the garden and the recipe I used was published HERE a few months ago.


Of course, there was plenty of fresh French bread  to accompany the second course of fish mousse/pate, made to my recipe which I published very recently HERE. 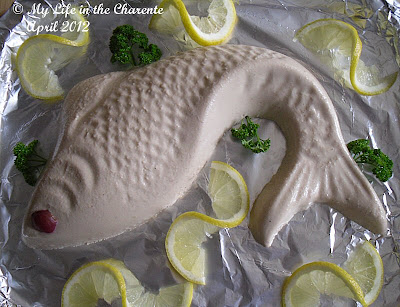 The main course of beef casserole was not recorded by the camera!  I made up the recipe for 6 people, more or less as follows!  I fried up a few lardons, sliced onions and leeks, then added  2 kg of meat cut into chunks, together with a couple of sliced carrots. I cooked it all, turning the meat until it was browned.  Then I stirred in a couple of tablespoons of flour and  a bottle of red wine was added, still stirring until the mixture started to bubble.  I then seasoned with salt and pepper and some herbes de provence (mixed herbs); finally, I added a packet of quartered fresh mushrooms and a tablespoon of tomato paste.  I allowed the casserole to simmer very slowly, until the meat was tender.  It was just a case of adding what I felt it needed for flavour, very DIY!  We served the beef with mashed garlic potato, cooked chestnuts, peas and carrots.
This was followed by the cheese course, for which I again forgot the camera, but I have tried below to re-create the cheese board, with the some of the selection of cheese left in the fridge! 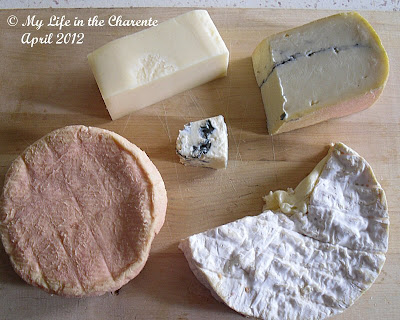 On the platter above are  (clockwise)- Emmental Français, Morbier, Coulommiers de caractère (mature), Petit Munster Géromé,  with  a morsel of Saint Agur in the centre.  The Comté was finished!
We finished off with a quince and apple tart. 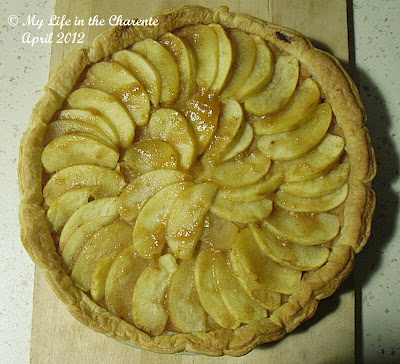 Again, there was no recipe and it was very much DIY.   I lined the pie dish with bought pastry (I like saving time), and I blind cooked it for 20 mins.   I then filled the pie with quince that I had frozen last year, when I had so much from our tree.  I did cook it up lightly beforehand and I added a little sugar and cinnamon to taste.  I then sliced three large apples and cooked them very gently in a large non stick frying pan, in a mixture of lemon juice, a little butter, cinnamon and sugar.  When lightly cooked, but still holding their shape, I placed them on top of the quince.  The tart went into the oven  at 180C (350F) when we had our main course and by the time we had finished the cheese, it was ready to eat.
The dinner went well and it appeared that everyone went home more than satisfied!
I have also just updated My Life Before Charente.
Posted by Diane at 13:01