Last Friday, I went with my neighbours to the "Nuit Romanes" held in the 800 year old church of Saint Maixent in nearby Vitrac St Vincent.  The name means the "Roman Arts" (see Here) (Merci Vagabonde for the info) or some people think it is "Romantic Nights" and for the seventh consecutive year, these cultural events (all free of charge!!) are being held at 100, yes one hundred!! different church and abbey venues throughout Poitou-Charentes (our department/county/state) during July and August. Culture is rightly very important to the French, they are determined to incorporate their ancient buildings in the celebrations and the high public demand ensures that each show is very well supported. At our event, the church was packed. We arrived early and managed to get seats for the first part of the two part show, but there were many later arrivals crammed into extra seats and standing space at the back of the small building.
The first part was musical, led by Matthew Saglio , a young and very  talented cellist.  I did not think this would be my type of music at all, but I was intrigued by his skill and the music he produced; it was a very magical and romantic moment in memorable surroundings.  The whole show was in "son et lumiere" (sound and light) style - music with changing lighting effects.  I am afraid that my photos are not very good, as not only was it dark, but I was not able to use the flash.  I am sure, though, that the following will give you some idea. 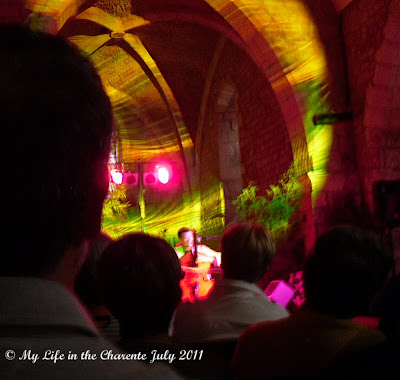 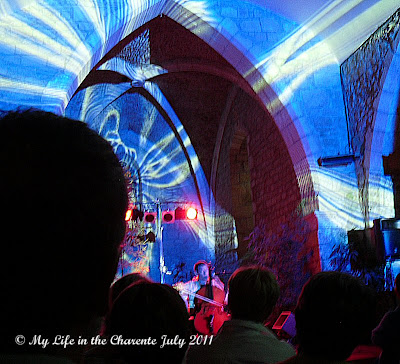 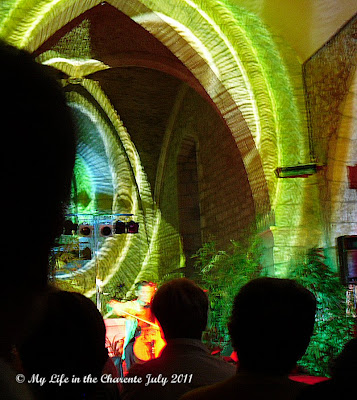 The second part of the show was outside on a flat grassy area down by the river, and featured a group of fire dancers, two women and two men.  Luckily it was a beautiful, but cool, evening, and although I  had a jacket on, there were many people simply in short sleeves!  Again I regret that the photography does not do justice to the skillful presentation; besides it being dark, the movements were so fast, it was difficult to capture adequate pictures with my little camera.  I did take some videos, but because my internet connection is so slow, it is impossible to load them on this post. 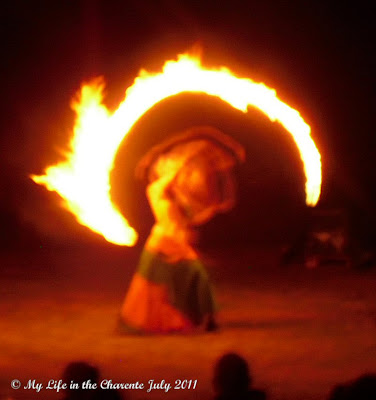 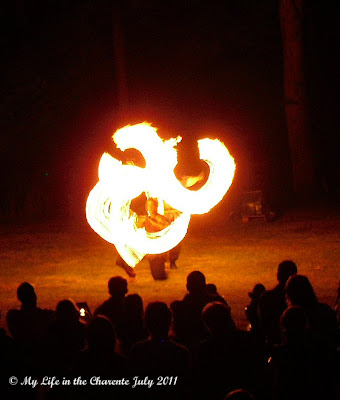 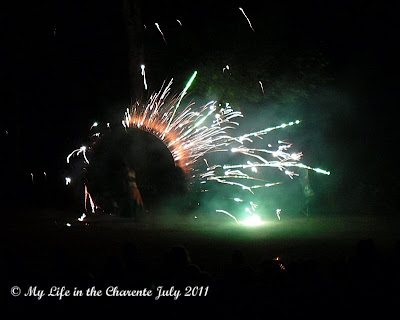 There was also a film show outside the church which showed the history of the church and of Vitrac, and I believe that afterwards there was also a chance to taste some of the local farm produce - conventionally cheese and wine!  As I was with friends, and they were ready to leave after the fire dancing, I missed the tasting opportunity, but nevertheless, it was well after 23h00 when I was dropped off at my front door. I am not aware of anything like this, certainly not on this scale, in the UK and I'll be keeping the event in my diary for next year!!! 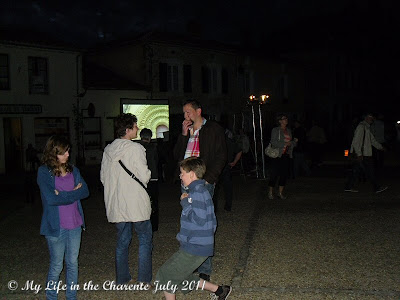 For further information see http://www.nuitsromanes.poitou-charentes.fr/
Posted by Diane at 21:23