Today I thought I would place my post back into the English countryside and an area which is close to our home here.  Because of the difficulty in taking good clear photos of the white horse at ground level, aerial shots are the only way to really see the true beauty of this interesting sculpure. It makes me wonder how the ancient "artists" managed, without an aeroplane and from a ground level aspect, to get the proportions of the stylised beast so wonderfully set out!! I have cheated a little and used a picture from the web.  Mine would just not do it justice and I am afraid that hiring a helicopter to fly up and take photos would be a little too expensive :-)
I have used two sites for the following information and photo, namely:
Photo at telegraph.co.uk  HERE
and
information at mysteriousbritain.co.uk HERE 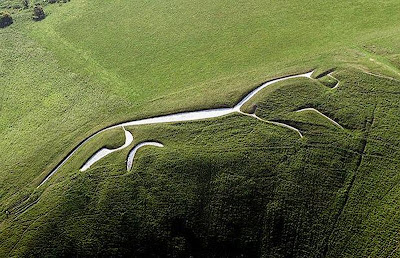 The White Horse of Uffington, with its elegant lines of white chalk bedrock, is thought to be the oldest hill figure in Britain. The image is a stylised representation of a horse some 374 feet in length, and is thought to date back as far as 1000BC in the late Bronze Age. Similar images have been found depicted on coins from that period, and it is thought that the figure represents a horse goddess connected with the local Belgae tribe. The goddess is generally believed to be one form of Epona, worshipped throughout the Celtic world.
The horse was ritually scoured every seven years under the jurisdiction of the local Lord, who had to fund the event. The festival - for that is what it became - could last for over three days and consisted of fun and games, traditional cheese rolling, wrestling and other pastimes. The focus of the games was in the enclosed earthen banks of the adjacent Uffington Castle, an Iron Age hill fort, towards which the White Horse seems to be galloping,  when viewed from the air. The cheese rolling (it still goes on today in other locations!) was held on the steep sided valley known as The Manger, the place where the horse was said to feed on moonlit nights. The festival, which may have had ancient origins, lapsed about a hundred years ago, and it is fortunate that the White Horse did not become completely overgrown. The horse is now cleaned by members of English Heritage, who are responsible for the site. 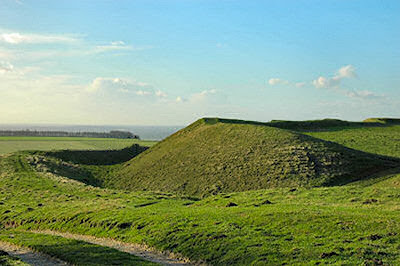 Uffington Castle
The castle is an impressive Iron Age hill fort, once protected by timber walls on top of the surviving banks and ditches, and faced with sarcen stones. It is likely that the tribe who created the White Horse once lived within this hill fort. The entrance to the hill fort was via the Northwest, protected by an earthen passageway that would have been further protected by wood. The castle was excavated in 1850 when evidence of the wooden structure was found, along with an Iron Age coin of the Dobunni tribe.
It covers about 32,000 square metres and is surrounded by two earth banks separated by a ditch with an entrance in the eastern end. A second entrance in the western end was apparently blocked up a few centuries after it was built.
Two oblong mounds, one containing 46 Romano-British burials and one containing 8 Saxon burials, lie nearby.

Happy Chinese New Year to all my chinese friends and followers.
Posted by Diane at 10:02