Where does the time go?

Well, this week is galloping by; where has it has gone, I say with a sigh?
I spent  Monday morning cleaning the house, which endeavour I followed up with trying to cut the top of a very wide fir hedge. The petrol trimmer is quite heavy and in no time at all, my right arm was ready to give up completely! After that, I made more plum jam and picked lots more beans and courgettes. I am picking tomatoes every day, but I have certainly not got a glut of them. There are plenty of green ones, so it could still happen! There are plums, plums and more plums; the four trees and the ground are just covered; I have decided there is only so much one person can do, and that is, of course, if you have the time - and jars!
David arrived  on Monday evening with his chain saw and cut all the branches off  the very large, fifth, plumless plum tree for me. We are led to believe it is too close to the quince which is why it has no plums, and why, in turn, it caused the quince to throw a tantrum this year. The quince leaves were covered in spots and ended up all over the ground and the fruit started to drop. The nursery told me it was blight and the dry weather had a lot to do with it. Quick treatment seems to have saved the day, but the plum had to come out to let the air through. David then attacked a fir,  which we had also decided must exit the garden. I have no idea what kind it is, but it's one of those low growing ones and extremely spiteful. it is always hard for us to consider removing trees, but this one has thousands of tiny little prickles and quite honestly, as there were bits dying off in places, it was not only lacking in beauty, but it was quite ugly! David then brought his trailer around, so I could spend Tuesday packing as much as possible into it. 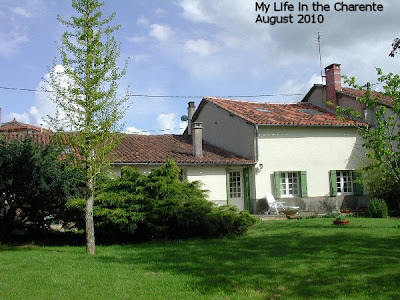 The fir on the extreme left is the one now cut down. 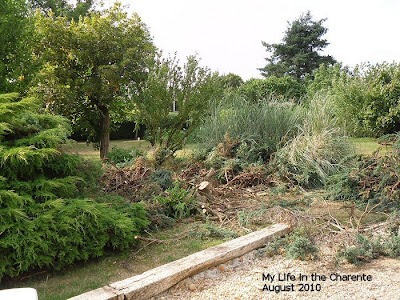 What remains after David and the chain saw! 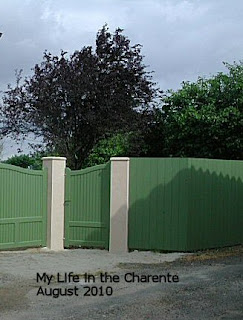 The plum tree before cutting with the quince hidden to the right. 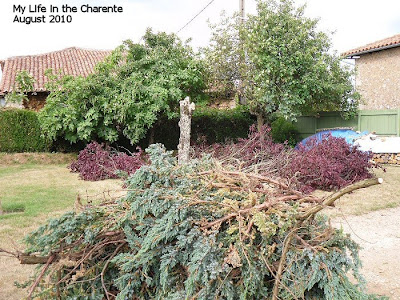 The stump of the plum remains behind the bits of fir. You can see the quince further back with only half of its leaves. To the left of the quince is a medlar and even further left is a fig tree which is heavily laden with fruit -that is an annual wonder!
Tuesday just seemed to go on and on. Odd shaped, or long branches had to be cut into yet smaller pieces, as my instructions had been get as much as possible in the trailer. Any wood that was worth keeping for the fire was  kept aside. 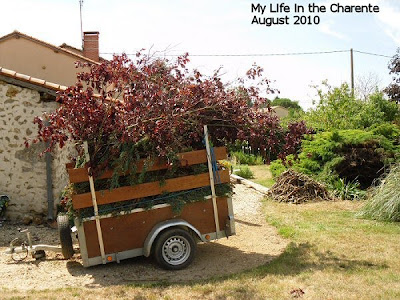 Trailer load number one.
David then collected it after work and returned the empty trailer for the second load on Wednesday. Phew…….. I then had a quick shower and ran up the road to a neighbour  for a previously arranged aperitif. It was at least an enforced rest, and after a couple of Pastis (Ricard), I even regained enough strength  to lift the glass with my right arm!

After an early night I awoke at 01h30, only to be fed up by 05h00 , when I got up and made another batch of jam. Then back to the trailer I went and loaded it up for the second time. 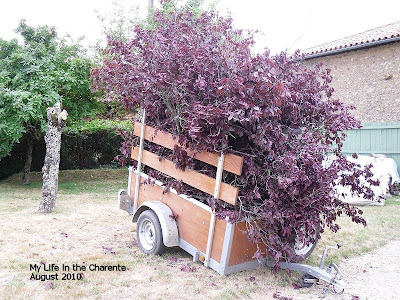 Load number two and final. David was surprised that I had managed to do it in two loads despite him telling me to keep packing it in!
I then had to go to Montemboeuf to collect a parcel which I missed from yesterday's delivery; I was in the garden and did not hear the postman. After arriving at Montemboeuf, I was told “oh no it is at the mayor’s office in Vitrac”. On arrival at Vitrac at 11h00, I was told I was too early and it would only be there at 11h30……… I ended up going into Chasseneuil to do some shopping and arrived back at the same time as the postman. Our usual postlady is on holiday which is what caused all the confusion. She knows where to find me when I don’t answer the door!!

Tomorrow, yet another neighbour is going to arrive with chains and tractor. I hope with luck, we can pull the tree roots out. Oh dear, more tidying up on the way. While typing this, the weather has suddenly changed, the clouds have built up and it is drizzling. The garden will enjoy it even if it is only a little, but I have a car full of rubbish which I want to take to the dump this afternoon and David will also arrive to collect the trailer. It could rain any other day…….

A little later – All rubbish has gone to the dump and yes we did  get wet!!  I am so spoilt with all the help I get from friends and neighbours.

P.S. Just as I returned, friends from the next village arrived  with a whole set of CD's for me to help with my French.  No rush I have been told.  I can even take them back to the UK for winter. I just have to keep trying.
Posted by Diane at 19:41