At the barbecue to which I went on the night after Nigel returned to the UK, I met a delightful English couple. During the course of conversation, and talking about the garden, I mentioned that I needed a lot more compost and commented about the price of it.  I have been buying it by the (small) bagful at building centres. I was told that there were some stables near them where I could  possibly get manure; they used to go there on a regular basis, before they  started generating their own rabbit compost. A few days later, I received a phone call and I was offered their help,  by way of a driver, car and trailer; how could I turn down a wonderful offer like that? I have the car, but no tow hitch or trailer, so I would have had to have collected it in bags.
On Sunday morning at 09h30, we were on our way to the stables with our large cubic metre builder’s bag, (courtesy of David), in the back of the trailer. We thought it would be easier for offloading when we returned to our house. I was so overwhelmed by the size of the manure pile, and the filling of the bag, that I forgot all about the camera! I did remember it just before we unloaded it. 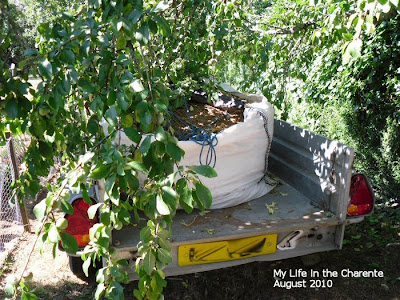 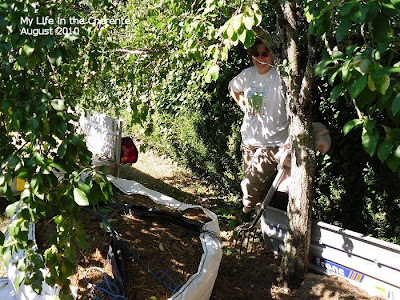 My friend partly hidden under the plum tree after tipping the bag out of the trailer.
After moving the manure from the builder’s bag to the two large compost bins, I had one bin full right to the top and the other about 6 inches from the top. As such all for free, what a pleasure. Next year this will have turned into ideal compost for the garden. 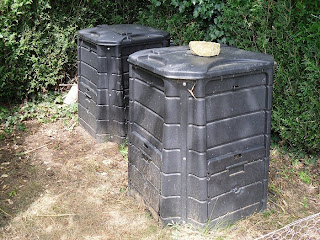 I also have a third, and larger, bin which is slowly filling up with all the 'rubbish' from the garden.
On our return to my friends, I was shown around and I was astounded at the work they had done to their house; just the two of them and it was so professional. They had not only done roofing, but had laid magnificent wooden flooring, amongst a number of other jobs. Nevertheless, what really took my eye was the floor they are now laying in their entertainment area outside. There were originally just two walls with recesses in the wall where the chicken used to nest. There are now two more low balustrades, the materials bought some years ago from a building being demolished in the UK. 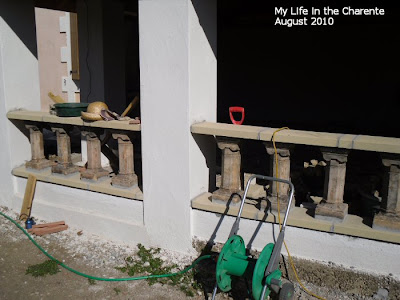 Also there is now a full roof over the whole area. To return to the floor though, they had dug up a Charentaise pebble floor from a room which is now their utility room. 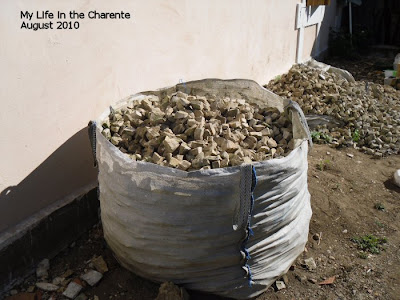 They are now re-laying it in the entertainment area. It looks wonderful already, and I am really looking forward to seeing the finished product. Congratulations to you both, I am impressed and I am so glad I met you. 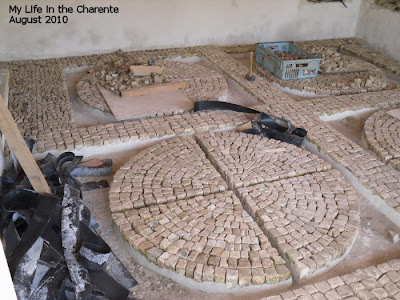 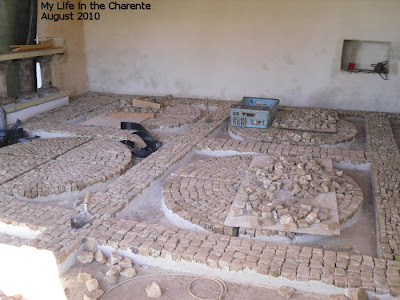 Note one of the recesses in the wall at the back where the chicken used to nest! I hope to take some more photos when the floor is finally finished.
Lastly, but most importantly, thank you so much for your help in the acquisition of the valuable garden compost. Not only for the thought, but the car, trailer and your time involved.
Posted by Diane at 17:40

Labels: Charentais floor, Charente, Home and Garden, Restoration, Round and About