Round and About - Le Lindois

On Sunday, I went for a cycle ride, as the weather was a little bit cooler.   I thought that it may be interesting to cycle to the village of Le Lindois, where a Bric a Brac sale had been organised (similar to a car boot sale) and a Vide Grenier
It was a lovely day for cycling, we had  full cloud cover, but the temperature was still well over 20°C. I cycled through Montemboeuf (see here and here) and then on to Le Lindois.  The village was packed with cars and people, with hardly a space left to park a car and there was little room to walk around. Having to wheel  the bike as well, I gave up the idea of trying to see what was for sale.  I had no money with me anyway and had no intention of  carrying anything home on the bike!
I did take a couple of interesting photographs though.

Church St Pierre:
The old church of Lindois was located in the court of the castle.  But the bell-tower broke down after the festivals of Christmas 1922. The town council then decided to rebuild a new church in the borough, by re-using the stones of the old one. The current church was inaugurated in October 1924.

This porch and the wall-pinion which framed the original building are the only vestiges which remain of this church. In 1928 they were classified as Historic buildings. 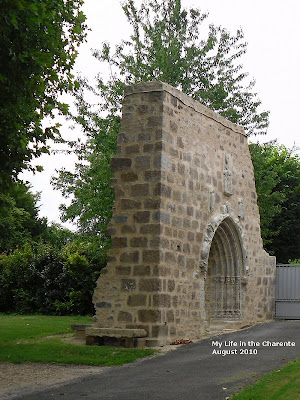 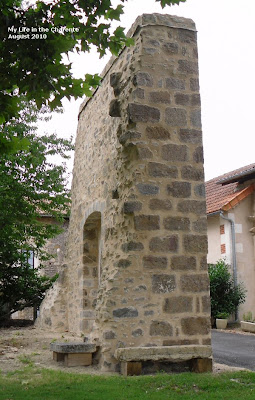 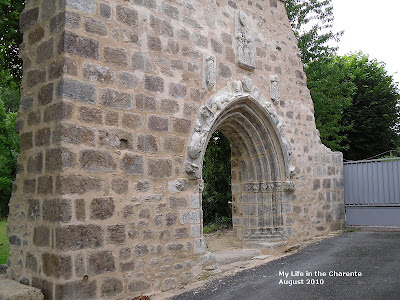 I could see no remains of the castle but perhaps there are still bits hidden around that I did not recognise.
Of course the village would not be complete without its war memorial. 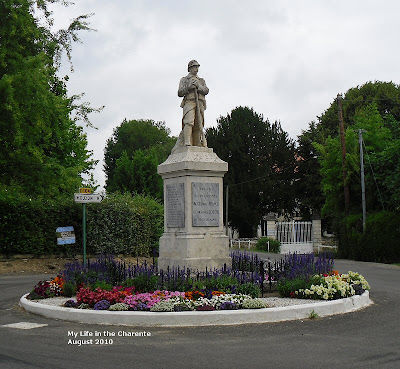 I then made my way home through the village of L’Arbre,  which is the highest point in the Charente (345m or 1130 feet above sea level).  I made it back home just as the clouds darkened and the thunder started to bang and crash overhead.   At 32 kms, with a number of  little climbs, the whole trip was good exercise!   The storm didn't come to much and we only had 2mm of rain, but it was still very welcome for the dry and thirsty garden.  The thunder carried on rolling around and rattling the windows for most of the afternoon and evening.
Posted by Diane at 09:59

Labels: Church, Le Lindois, Round and About