What a fitting day to have my 100th blog, the final day of the Tour de France! As from now, I will not be numbering on line, but that of course does not mean I don’t know where I've got to!
We have had a very busy week with entertaining on Monday, Tuesday, Thursday and Friday, both provided and received. For Wednesday, we had planned to go to see a local village named Tusson, (TDF rest day) but this was the only day we had rain, so we ended up staying at home.

By the time the next blog is on line, it will be back to ‘One of us’ yet again, as Nigel flies back to the UK early on Tuesday morning. I have another barbeque to go to on Wednesday night, an event which Nigel will sadly miss.
Returning to Monday night, we had David and family around for dinner. 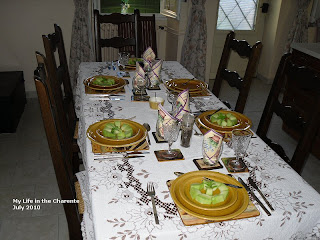 We started out with melon followed by paté and French bread.  Not forgetting, of course, a choice of red or white wine. We then had my Cassoulet dish, which I have mentioned a couple of times on the blog before, but with only a link to my Recipe web site. I will now put it on the site in full.
Cassoulet
Total time - 4 hours plus soaking of beans but well worth the effort.
Serves 8-10

Instructions
1. Place the soaked beans in a large saucepan, cover with fresh cold water, bring to the boil and cook for 5 minutes. Drain well and set aside. 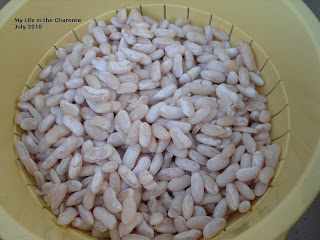 2. Meanwhile, heat the goose fat or lard in a large flameproof casserole, add the pork and lamb which has been cut into cubes and brown on all sides. Separate and set aside the pork rind. 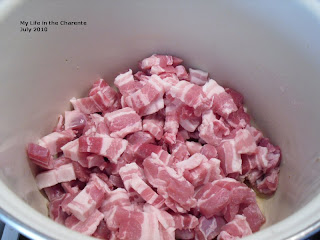 3. Add the carrots, celery and tomatoes and cook for 5 minutes, stirring. 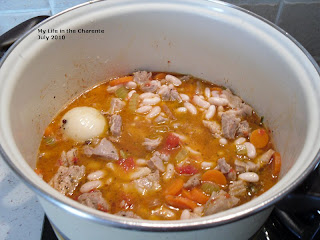 4. Add the drained beans, bouquet garni, garlic, salt, pepper, onions and reserved pork rind which has been cut into strips ( I browned the rind first to remove some of the fat). Cover with cold water, bring to the boil then reduce the heat, cover and cook over a low heat for about 1-1/2 hours. 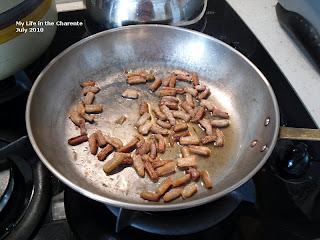 5. Preheat the oven to 170C, (325F, Gas Mark 3) and brown the sausages in a little fat.
6. Add the duck or goose confit and the browned sausages cut in ½ to the casserole, pushing them down into the beans, then transfer the casserole to the oven and cook for a further 2 hours, uncovered, pushing the brown crust which will form, back down into the beans with a wooden spoon several times during the cooking period (traditionally six times). Serve hot, making sure each diner gets a piece of all the meats. A meal in itself. Needs perhaps only salad to accompany. 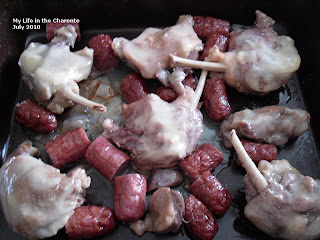 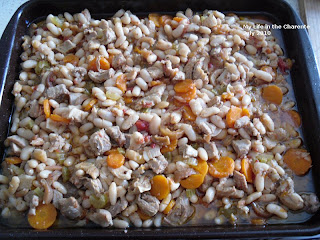 This dish can be prepared well in advance and reheated or frozen for future use. 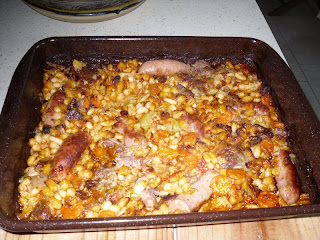 We finished off with cheese,  followed by a Baked Cherry Custard, which, in my enthusiasm, I forgot to take a photo of!!!


Preparation:
Pour the cherries into a buttered 4 pint baking dish. Whisk the remaining ingredients in a bowl to form a light, thin batter. Pour over the cherries and place in a preheated 180C (350 F) oven for 45 minutes, or until cherry custard is browned and puffed around the edges, and the center is set. Allow to cool to warm or room temperature before serving. Sprinkle with icing sugar.
Serve plain or with a scoop of vanilla ice cream.

Andy Schleck (Sax) Luxembourg  eventually finished 31” behind Alberto Contador (AST) Spain in the stage. The Spaniard has effectively earned his third victory in the Tour de France at the age of 27 with a lead of 39 seconds – the fifth closest Tour in history. If only Andy Schleck’s chain had not come off in the mountains, it would have possibly been a dead heat!

The stage win went to the Swiss rider Fabian Cancellara (Sax) which was no surprise as he is at his best in time trials. Seventeen seconds behind was the German, Tony Martin (THR), and third yet another German, B Grabsch from the same team.

Stage 20 - Longjumeau - Paris Champs-Élysées 102.5 km - Sunday 25 July
The traditional fairly relaxed run-in from the suburbs into central Paris for eight laps of 7km around the central district and primarily on the cobbles of the Champs Elysees.


The final overall winner of the Tour de France is:-
Alberto Contador (AST) Spain (yellow jersey)
This is now his third win of the TDF
The young rider was won by:- Andy Schleck (Sax) Luxembourg (white jersey)
The points winner is:- Alessandro Petacchi (LAM) (green jersey)
The King of the Mountains goes to Anthony Charteau (BTL) France (red polka dot jersey)
The team award was won by Team Radio Shack.  Lance Armstrong's team was out in front for this award  yesterday morning, and the time trial results of yesterday wrote them into the history books. What will happen next year without Armstrong's participation in the TDF, we will have to wait and see!
Posted by Diane at 18:39