After a week of intermittent internet connection, on some days none at all, my blog has been 'dragging its feet’ somewhat!! The technician arrives today and I am hoping that the result will then be a permanent, speedier internet. One can always dream :-)
Never mind, the lack of computer use meant I got to work in the garden and I sincerely hope, that the rabbits can not get over, or under, my new fence around the vegetable garden. 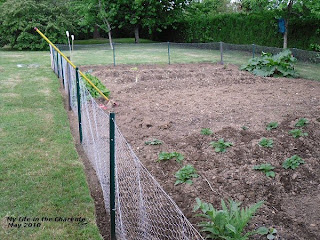 Artichoke in the foreground, potatoes just coming through behind and rhubarb at the back.
It was extremely difficult to do on my own and by hand; I was not going to spend more money on new tools! Nigel would have liked me to have waited until he arrived at the end of the month, but I just wanted the job over and done with, so I could get planting. I don’t think I will ever manage to get a job as a fencer with my results, but if it does the required job I will be happy. The bunnies can go and eat vegetables elsewhere. 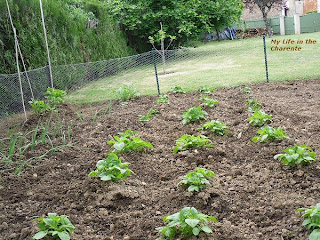 The potatoes, with the onions on the left and on the far left at the back is the topinambour.
We had a couple of slightly warmer days while I was doing the fence, (it is cold and damp again today!) and it was a pleasure working in the peace and quiet of the countryside. Apart from the odd tractor, I could hear crickets chirping; we seem to have quite a lot in the lawn. The birds were singing and I could identify a few from their calls, but generally I need to see them to do a positive identification. I did see the Great Spotted Woodpecker tapping away at one of our trees looking for bugs. I also saw my first Scarce Swallowtail Butterfly - Iphiclides podalirius, of the year. 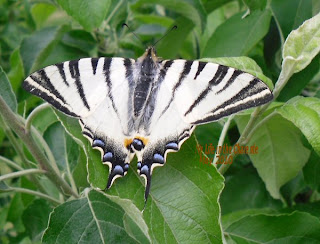 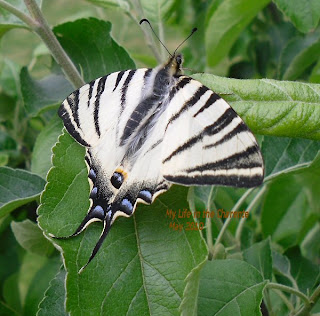 Iphiclides podalirius,
On Sunday, my neighbours took me to the ‘Concours de Pêche’. This is an annual event, and last year when I saw it advertised, I thought that was strange. It was too early for peaches and I wondered why they were having it then! In fact pêche not only means peach, but also fishing, just to confuse me totally. The event is actually a fishing competition held at a local dam which is stocked with trout. This is followed by a luncheon in typical French fashion. We arrived too late for the competition; my neighbours had been in for a couple of days, so they had quite a long drive to return. On our arrival, one of the guys showed me a very unique trout that he had caught which was golden. I have never seen anything like it before, but it was, I was definitely assured, a trout! One lives and learns. 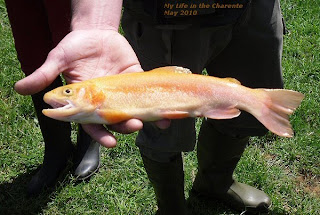 I suspect that the bar had been quite busy during the course of the morning and everyone was very cheerful and full of fun. Finally we all got to sit down at tables in a large tent and the food, wine and bread was served in abundance. 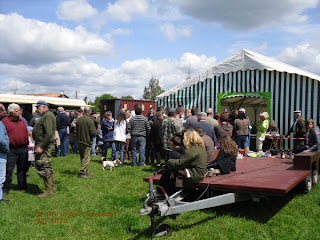 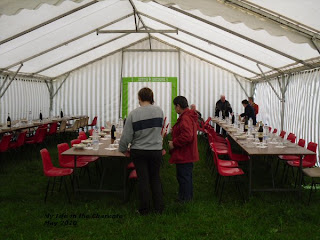 The starter was some sort of salad type mix, with rice, corn, crab, tomato, cucumber and egg with an unknown dressing – it was delicious. Then the herbed lamb with a saucepan of haricot mixture arrived. I have no idea what was in the latter, other than the haricot, but it was very good, and the tasty lamb was melt-in-the-mouth tender. There was so much meat that the trays came round three times and you could help yourself to as much as you wanted. Then in the normal French way, the dressed lettuce came around afterwards as its own course. This was followed by bread and cheese and then ice cream. Finally the champagne arrived, and need I add there were many ‘happy’ people around by this time. As each cork exploded across the tent there were cheers and people clapping. Have you ever heard about 80 people all talking French at the same time……….? I am pretty sure I was the only native English speaking person there, so it was quite an experience!! Even my neighbours commented that it was so noisy they could not hear themselves talking. It was all great fun neverthe less and I was safely delivered home just before 5pm.
Posted by Diane at 12:11

Labels: Home and Garden, Insects and Bugs, Round and About, Wildlife