The onions were planted on Friday, together with tomatoes, pumpkin, butternut and peppers, all planted out in small pots. It is still a bit cold to plant direct into the garden. The pots have a further advantage in that I can put a fleece blanket over them at night, until they get established. 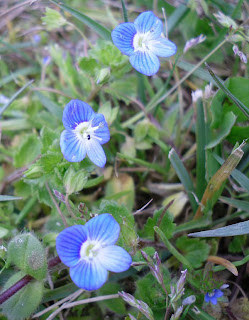 More weeds in the lawn, but they are so pretty! These mini flowers are only about 4mm across
I cooked some rusks so I had something to snack on. Both my husband and I love these; they are such a good stand-by for the odd hour when you feel like you just have to nibble on something! I made a whole batch for Nigel before I left the UK, so I hope they will last him until he returns to France at the end of May. He can then take a new batch home with him.
South Africans love these rusks dipped into either tea or coffee, especially in winter. I have to say we like them just as they are. For my recipe click HERE.
The ones in this picture I made with Farine de sarrasin dit Blé Noir. This is a very dark flour made from buck wheat, which is specially for crepes and galettes. The taste is magical, but they did not rise as much as usual. so next time I will mix ½ and ½ with Farine de Blé which is plain whole wheat flour. 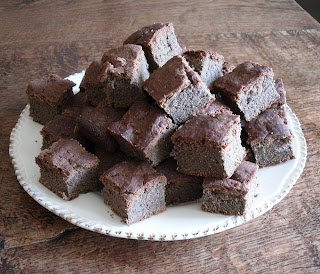 I had thought about going for a cycle ride later in the day but I decided that the wind was just a bit too strong. Instead, I went for a short walk down the road where I saw these cows with their calves. The latter were apparently camera shy and I had a good view of their tail ends! 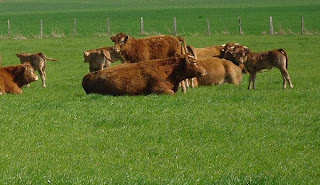 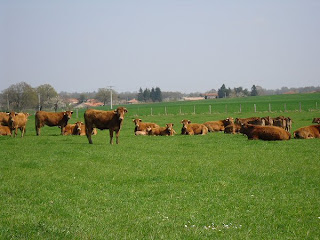 Today the wind is still blowing and although the sun is warm, the wind is anything but!  Next week, if this northerly wind is still blowing, I will put my bike on the cycle trainer. I brought the trainer over from the UK this year, so I could get in some exercise on rainy days, but now maybe I can try to get some training in ‘cycling’ in the barn, before I go out on the road. I love cycling in France as the countryside is so beautiful and there is always so much going on around the farms. 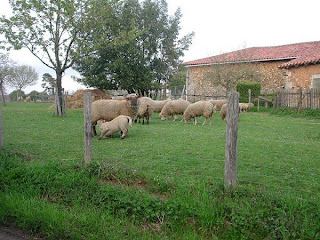 Spring is in the air - these are my neighbours.
Posted by Diane at 12:48