June 3 2006
My first trip alone, I left home at mid-day to catch the ferry across to France with a fully loaded car where I stayed overnight with friends. I did not get a lot of sleep as there were other friends there and we partied on till late!

June 4 2006
I was up early and after breakfast I was on the road by 08h00. It was a pretty uneventful trip; it took longer than usual as driving alone I had to navigate as well so there were several stops along the way to check the map. I did not have a SatNav at this stage!! On leaving the main road to turn off near home it went through my mind that yes, I had done it and I was just about there. I was pretty tired but knew all I had to do was unpack the car and fall into bed. What I had not planned on was driving through Mansle a Gendarme jumping out in front of me and stopping the car. A very serious and apparently bad tempered policeman jabbered something at me in very fast French. I gathered that he wanted to see papers of some sort but I was not sure if he meant the car or me, he was obviously very exasperated that I was having trouble following what he was saying. I produced the registration and insurance papers for the car and then policeman number 2 walked down and what a difference, he greeted me with a smile and asked me if I lived here in English. He then asked if I had my driver’s licence which I produced and he sent me on my way with a smile. The last few miles went well and I was soon at the house.
The shock then was that very little of the builder’s work that I had expected to be finished at the house had even started!! The phone although connected did not work and contact with Nigel was only text messages. Finally I fell into bed and had a really good night’s sleep.

5 June 2006
I got up early and as I had discovered that it was a holiday in France I had to scratch around in the cupboards for something to eat for the day. Holiday or not the builders (minus the boss) arrived in force at 08h00 and it was all go for the whole day. On asking about the telephone, it was discovered that when the builders had put the new door into the spare room one of the 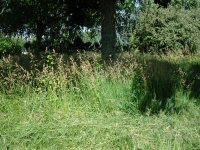 telephone plugs had been in the way so they had just cut through the line and had not bothered to reattach it! All so easy, 5 minutes later it was working. I spent the day with the weed eater (strimmer) trying to level the height of the grass. In most places it was about 4 foot high but in some areas it was over my head and I made very little impression on it. The weed eater was getting hot with all the strain so I had to let it cool down regularly. I did cut the hedge between us and the neighbour so there was something to show for the day’s efforts!

6 June 2006
The boss man arrived at 08h00 with the workers and we went through the whole work sheet which he then assured me would be done very quickly. Some how while he spoke French and I used sign language we sort of understood each other! Why he could not have done it all before I arrived I will never find out but….. The old story of not being on the spot. I managed to get out and buy some food but very little real work was done by me today as I spent the day shopping and sorting out problems.

7 June 2006
Up early again and the builders arrived at 09h00 I attacked the grass again which was looking a bit better but still there was masses to do. I wanted to start work in the house but while it was so hot and no sign of rain I felt the garden must come first. The new mattress was delivered so at last I could get a good nights sleep. I never want to sleep on the blow up mattress ever again!! 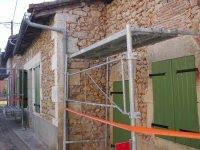 so much ‘stuff’ in the garage I could not get it out! I cleaned the windows on the road side of the house as they were covered with mess from where they had been pointing the stone on the front of the house. A lot of water was used in the process of washing the stone off and most of it ended up as dirty water on the windows and shutters! The shutters still needed cleaning but with the windows clear I could get some light into the house. The builders put up the gates and the fence today so tomorrow I would need to paint them, hopefully the warm weather will hold out until I have sealed the wood. 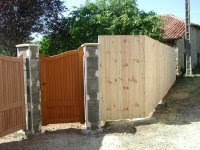 I painted the first coat on the fence all day, very hot and windy; not a good day for painting. I did not get as far as doing the gates; hopefully the weather will stay dry but I would be happy if it was a little cooler. I put the car inside at 18h45 and it was still 32ºC, I wonder what the temperature was earlier! I had a fright this afternoon when I heard a strange sound and looked up to see a swarm of bees heading straight in my direction. I dropped the paint brush and just went flat on the ground. As I am allergic to bees I had tablets with me but I doubt if they would have been any use against a swarm. They flew over me and settled in the hazel nut tree part way down our garden. I let ‘sleeping bees’ lie and hoped they would soon make a move!!

10 June 2006
After creeping up slowly to the hazel nut tree I discovered that I was again bee free!

Very hot and windy day again today but I managed to get the first coat finished on the gates and the last bit of the fence that I did not do yesterday. Not sure how many thunderbugs got painted into the gate but they don’t appear to be visible! For those that do not know what thunderbugs are, I do not know what their real name is, but they are minute little black insects that are attracted particularly by yellow or white but these seemed to take a fancy to the green I was using to paint the gates with.

David who lives opposite came over and introduced himself with his two children Leo and Leny; he was very friendly, spoke a little English and said if I had any problems to just give them a shout. I also spoke to him about keeping an eye on the house and forwarding any mail when we were away and he said that there was no problem.

I decided to start painting the back of the house and I spent the morning putting up the scaffolding outside (borrowed from friends who live about 30 mins away), thought I had better practise there before I start on our bedroom which had a very high ceiling. It took me all morning but I now know what I am doing - I think. Filled in a crack on the front wall with the scaffolding now up and by the time it was dry it was too hot to go and paint so I filled in all around the skirting in the passage with polyfilla, much cooler in there.

12 June 2006
Good, the builders were back to finish off all work. I cleaned the wall down in the kitchen where the partition had been and started cleaning some of the ceiling. The shoulders soon got tired doing that so I went out and painted the top half of the front wall using the scaffolding. It soon got too hot to paint outside so I had another go at the kitchen ceiling but my arm gave up, never mind I was about ¾ of the across the panel. Nigel phoned re a fax he had received from the builder who wanted some more money. Nigel said he wanted a final account first but I don’t think these guys are much good at paper work!! We shall see.
Posted by Diane at 12:19