Easter 2006 we drove over to France having previously spoken to the builder who assured us that the house would be ready for us stay there. We would then be able to get on and do all the decorating. We arrived very late in the evening having driven straight through without a stop. I did the driving in the UK and then Nigel took over in France. As I had not previously driven on the ‘wrong’ side of the road I was not going to be given a chance this time! We cheerily opened the front door of our new home to find the kitchen looking pretty good but the house was freezing. We had asked for the radiators to be left on!! We had no idea how to turn the system on as we had never used oil for heating before. We had never had radiators in South Africa or Zimbabwe where it was not cold enough to need them, our knowledge of heating was only the use we had in the UK where we were on gas. We went down to look at our new bedroom where we thought we would use our blow up mattress for the first night before assembling our double bed and buying a new mattress for it. We had a huge shock as it was certainly in no condition for us to move in and we pumped up our mattress in our frozen state and placed it on the very cold tiles on the kitchen floor. We found every bit of bedding plus the sleeping bags that we had brought with us and fully clothed after a hot drink (the gas in the kitchen worked) we climbed into bed and tried to warm up. I can never remember having such a terrible night, neither of us could sleep and we shivered our way through to the early hours of the morning when we decided that we would be warmer up and moving around. 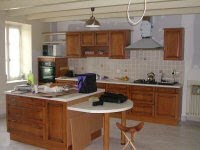 Eight-o-clock sharp Nigel was on the mobile asking what was happening and why was everything not as promised. Not long after, not one, not two but five white vans were parked outside and frantic work was going on all around us. The plumber was summoned and he turned on the radiators and showed us briefly (in French) how it all worked. The end result was a massive amount of work was done and we went off while all this was going on to buy some food. As we had no fridge we had to buy with care but food left in the barn was almost as cold. We lit the wood fire but found it did not throw out a lot of heat in the lounge and unless we were sitting close we really did not get much benefit. We assembled the bed in the lounge and used the blow up mattress until we could order the new one. With the radiators working and the fire burning well, we managed to finally get to bed in the evening after the builders left and catch up with some very welcome sleep.

The next day we set to work trying to tidy up where we could, as there was wall paper to strip off in every room except our bedroom barn conversion there was plenty to do. We decided that the kitchen was first in line to work on, to us this was the most important room where we would spend a lot of time living, cooking and eating. Not only was there wall paper to strip off but there was also wall paper to put back on. The ceiling needed rubbing down, wood beams and wood ceiling in part. We had opened up the bedroom next to the kitchen so we had a larger open plan kitchen and dining room. We went off to Mr Bricolage the local builders come hardware merchant in Angouleme to see what wall paper was available. Hmmm, nothing like what we were after but we did buy some to do the end in the dining room area. The wall that end needed something that covered many imperfections!! As the paper was wider than the normal UK wall paper and the ceiling was pretty high this job had to be done by my 6’4” husband Nigel. We did manage to make some difference in the two weeks we were there but the wall paper did not come off easily and the new paper did not go on 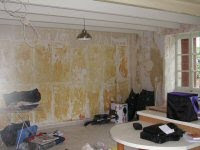 any easier. When we left to return to the UK, one end of the kitchen/ diner was papered and painted, the remainder of the room was ready to paper. We had also managed to rub down the outside of the shutters and painted them green.

The kitchen wall before wall paper

We had managed to order a new mattress but as the one we wanted was not in stock at the time we arranged for delivery during the next visit. Nigel had very little leave as we had previously planned to visit friends in Sydney at the end of 2006 so it looked like I was going to be doing the next trip alone. I was at this stage learning a lot of DIY!!

The garden needed little work done on it at this stage as the builder, when putting in the septic tank, had scattered all the contents that had come out of the large hole (almost solid clay!) all over the ‘lawn’ and we had a total mess. We spoke to him about this and he said he would remove it in due course. He still had some work to do so we knew he would return.

Complete destruction of the garden! 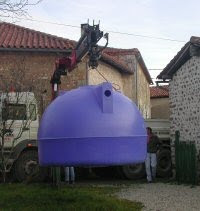 This was the size of the fosse septique that was inserted into the garden making the large hole where all the clay was dug out of!
Posted by Diane at 11:33