On our way to the UK in December, we stopped off to look at the the city of Amiens, which is in north-east France, more precisely in the Picardy region. The cathedral basilica of Our Lady of Amiens, or simply Amiens cathedral, is a Roman Catholic cathedral, set on a ridge overlooking the river Somme, scene of terrible fighting during WW1, from which it thankfully escaped without major damage, due to sandbag protective walls.

It is said to be the 19th largest church in the world. At 42 metres (139 feet) high, it is not only the tallest complete cathedral in France, but also has the largest interior volume; 200,000 cubic metres (however they worked that out?!). It was built between 1220 and 1266 and has been listed as a UNESCO world heritage site since 1981!

Amiens during the 13th century, in the long and peaceful reign of Louis IX, was a prosperous place and money was raised for this huge undertaking. The cathedrals of Reims and Chartres were built about the same time. 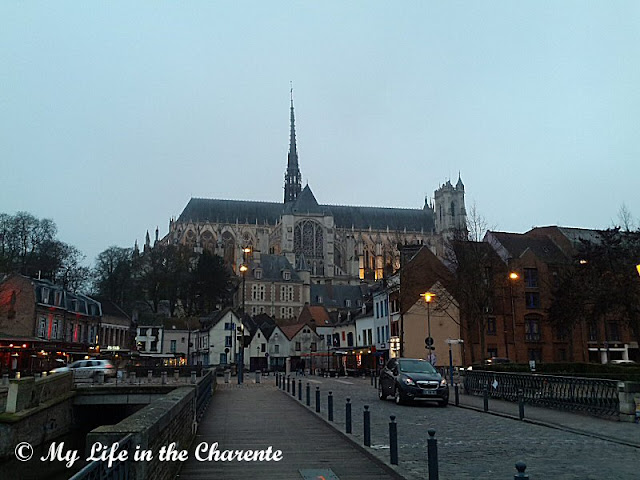 A view of the cathedral, stunningly situated in its commanding position overlooking the old town buildings. Fires in the building in 1258 unfortunately destroyed many archives and chronicles kept there. The great height to which the side walls were built, caused stability problems and cracking, and over the following centuries, additional buttresses (side supports) had to be added to prevent this getting worse! Another repair involved wrapping a huge heated chain around it at an upper level; this contracted as it cooled, thus holding the stonework together! An astonishing 13th century bodge! 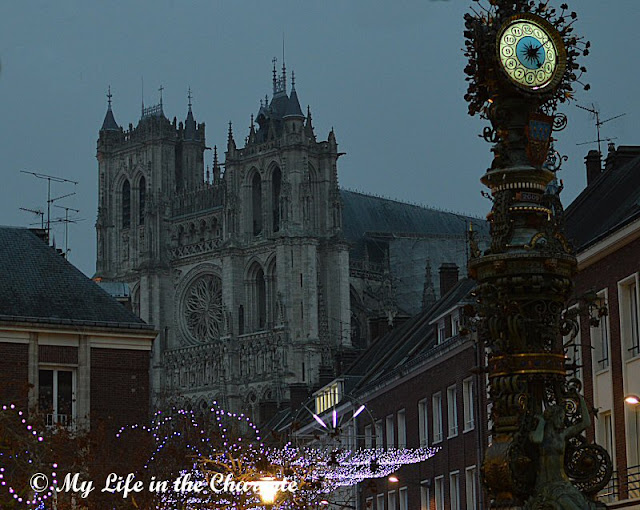 A few steps from the cathedral, near the Gambetta square, you can see the Dewailly clock. The clock was built at the request of, and with funds from, the former mayor of Amiens, Louis Dewailly.  After many years of manufacture, work was finally completed on 17 November 1898! Exquisite! 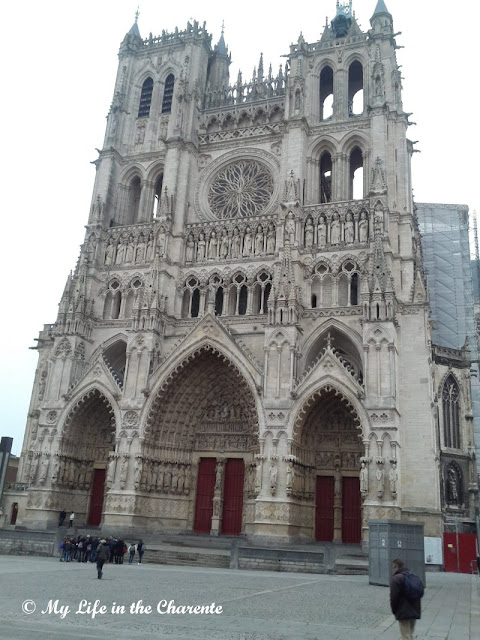 The magnificent west (and best known) face of the cathedral, built between 1220 and 1236. This façade is renowned for the quality and quantity of its carvings, many of which are locally revered saints and church officials. The towers were added about 150 years later, without much regard for what was already built below!! 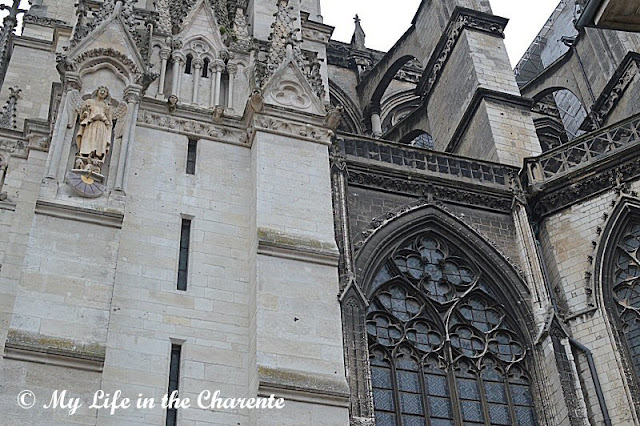 You can see some of the original colour in the statue here. 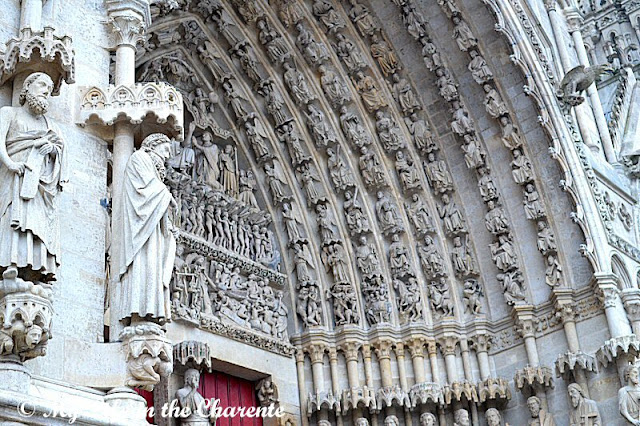 Architecture and carving of the eastern front portal. 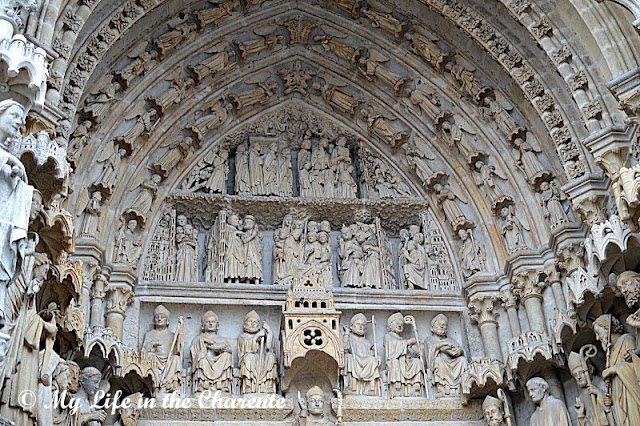 Statues illustrating Christ presiding over the Day of Judgement 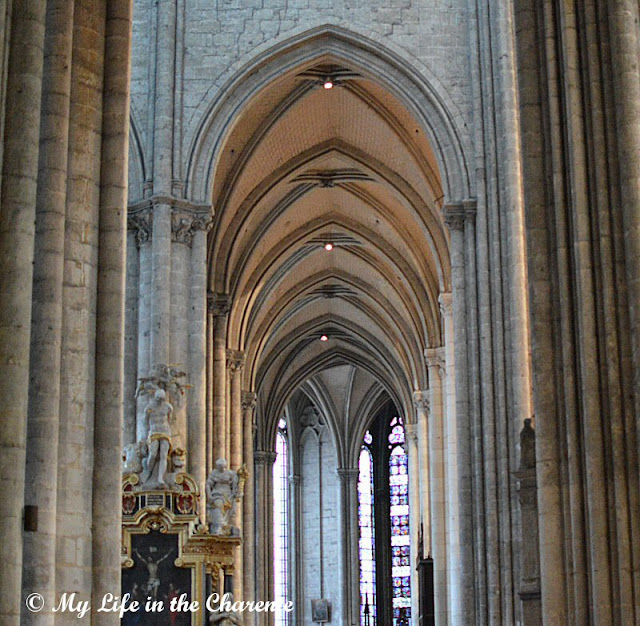 Inside, the vaulted ceiling. 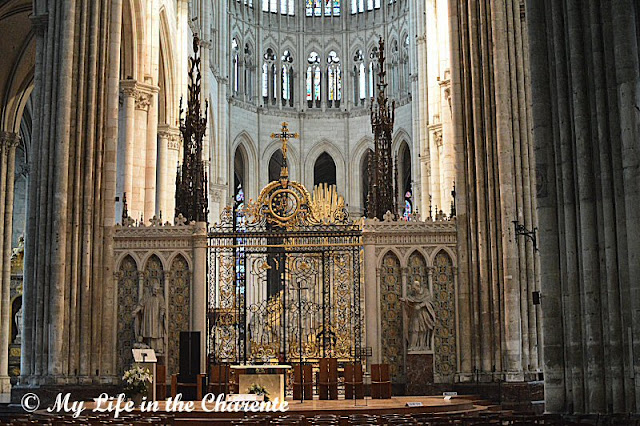 The altar and screen. 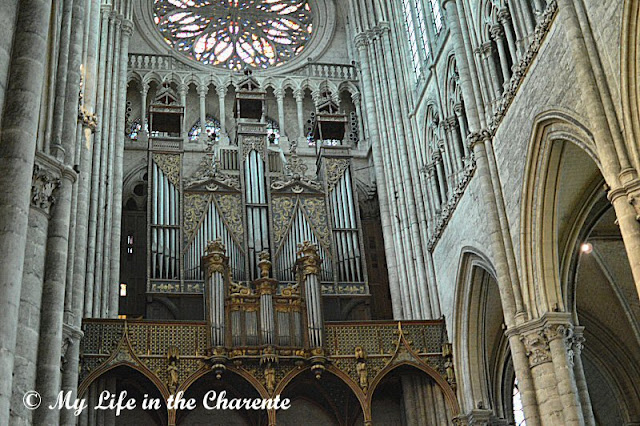 The organ, set behind the façade over the west entrance. 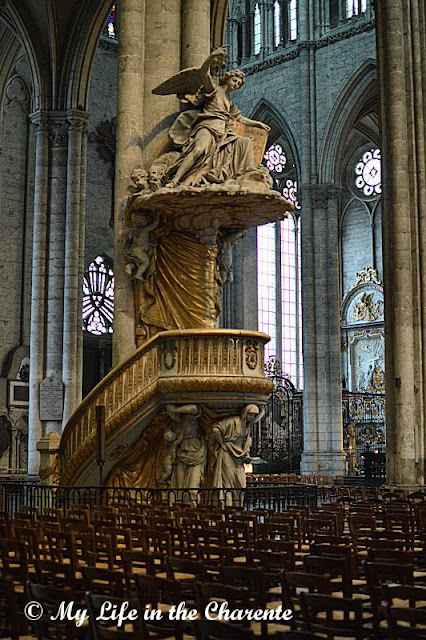 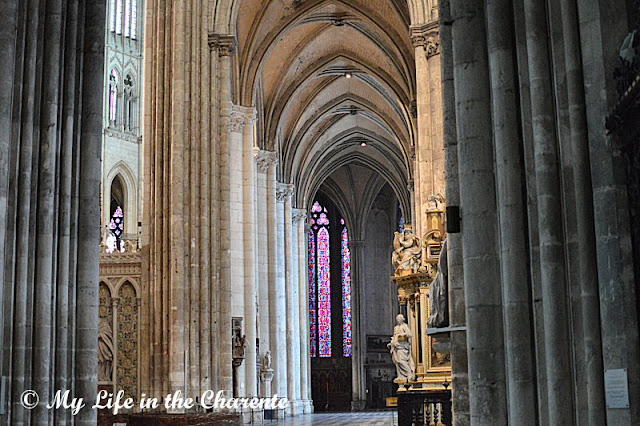 Another view of the lofty vaulted ceiling, plus some stained glass (not the original) and gold leaf! 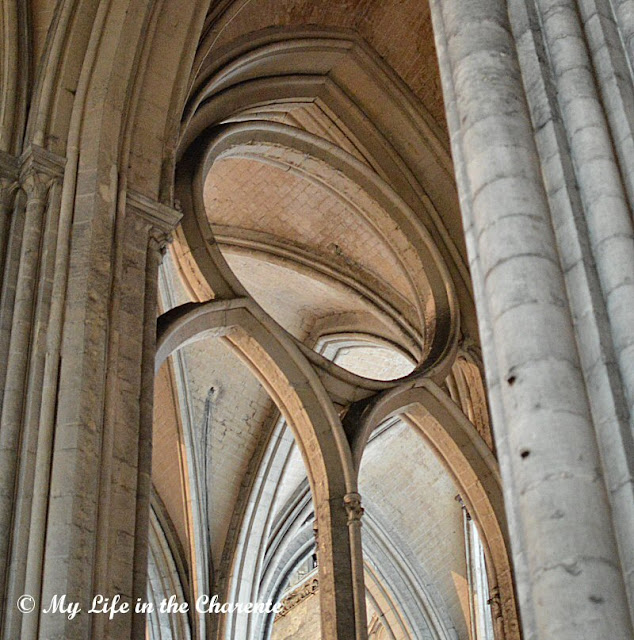 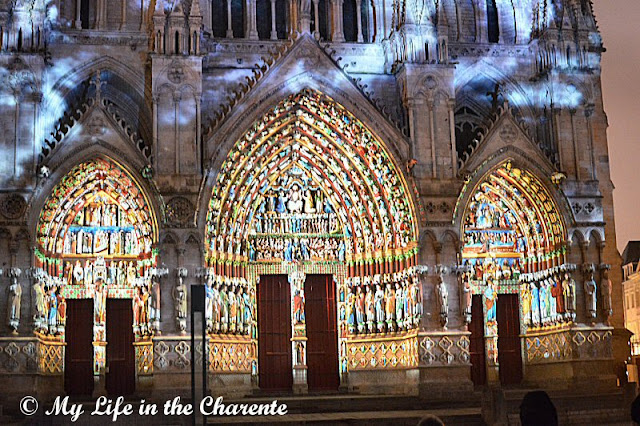 Illumination of the façade by precision spotlighting (see more detail below) to recreate the colours in which the statues were painted when the cathedral was originally built in the 13th century. It must have seemed so spectacular to the local people and to pilgrims of the time!

During the process of laser cleaning in the 1990s, it was discovered that the western façade of the cathedral was originally painted in multiple colours. Elaborate computer lighting techniques were developed to recreate these colours by precision projection of spotlights directly on the façade during the "son et lumiere" (Sound and light) shows held daily in December each year and periodically during the remainder of the year. If you are lucky enough to be there on a dry evening, as many people are, the one hour free show is a real privilege to witness! On the evening we went, the temperature was well below freezing, but there were nevertheless several hundred people watching the display.