A walk down memory lane.

The local tourism organisations have recently laid out a new circular rambling trail through wood and farmland near the tiny hamlet of Le Chatelars, commemorating and dedicated to the memory of the World War 2 Resistance group members who were brought up in and/or operated in the immediate area. The French Resistance is often called the Maquis, named after brushwood landscape common throughout France.

The walk is not too long and can be covered in an hour and a half or so, but at each of the seven points along the way, one is reminded of the important events of 1943-45 which took place in the surrounding countryside. To be able to walk in the footsteps of these brave Frenchmen and Frenchwomen, remembering their sacrifices, is a most rewarding way of spending time on a sunny Charente summer day! 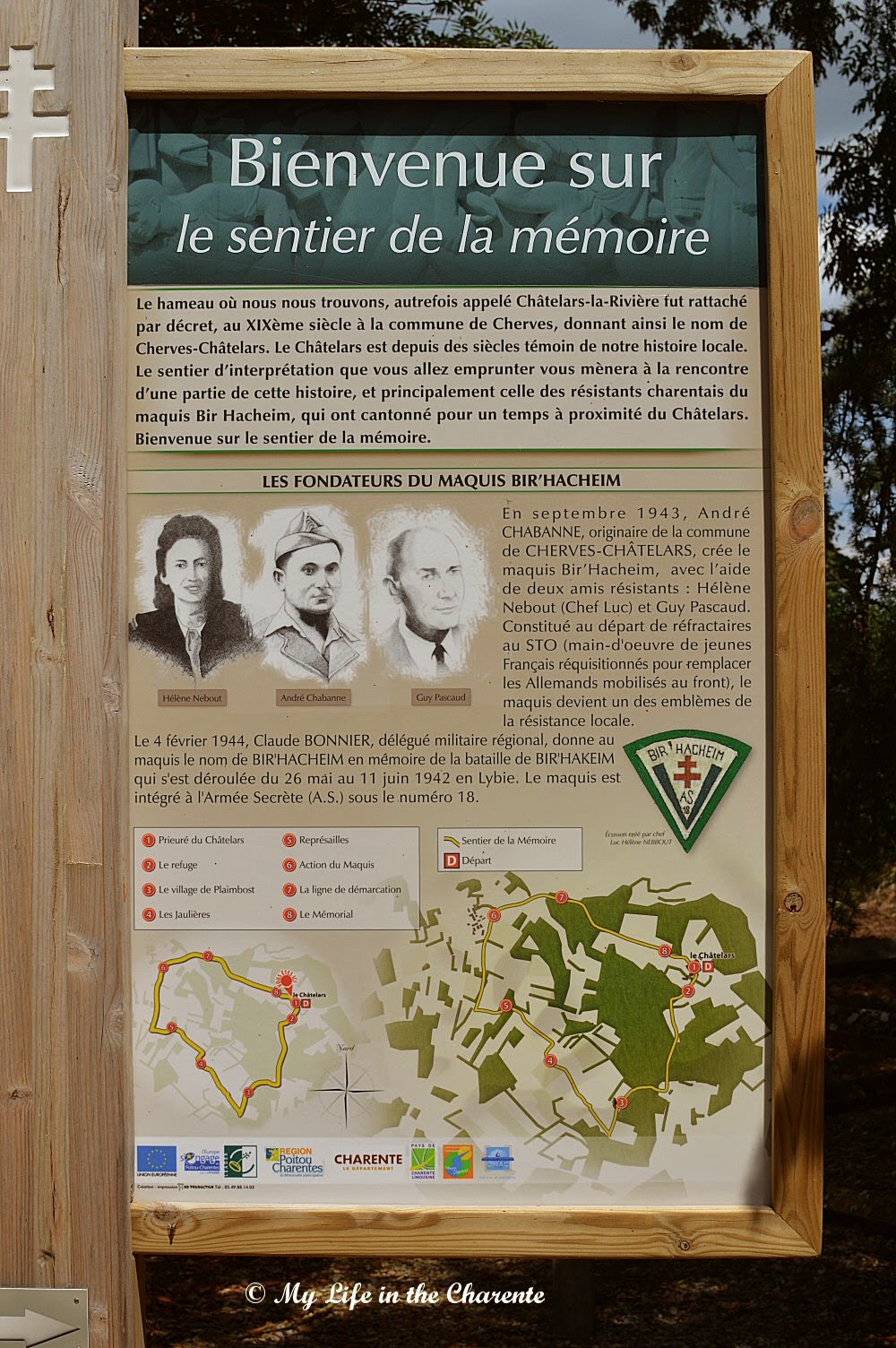 The welcome sign at the start of the walk. It shows the area, the route, the insignia of the local group (named Bir Hacheim after the North African desert battle) who started the organised resistance  against Nazi occupation in September 1943, and photos of the group's three founders. Firstly, Helene Nebout (known as "Chef Luc") is still alive and living locally. In the centre, Andre Chabanne, the commander and to the right, Guy Pascaud. 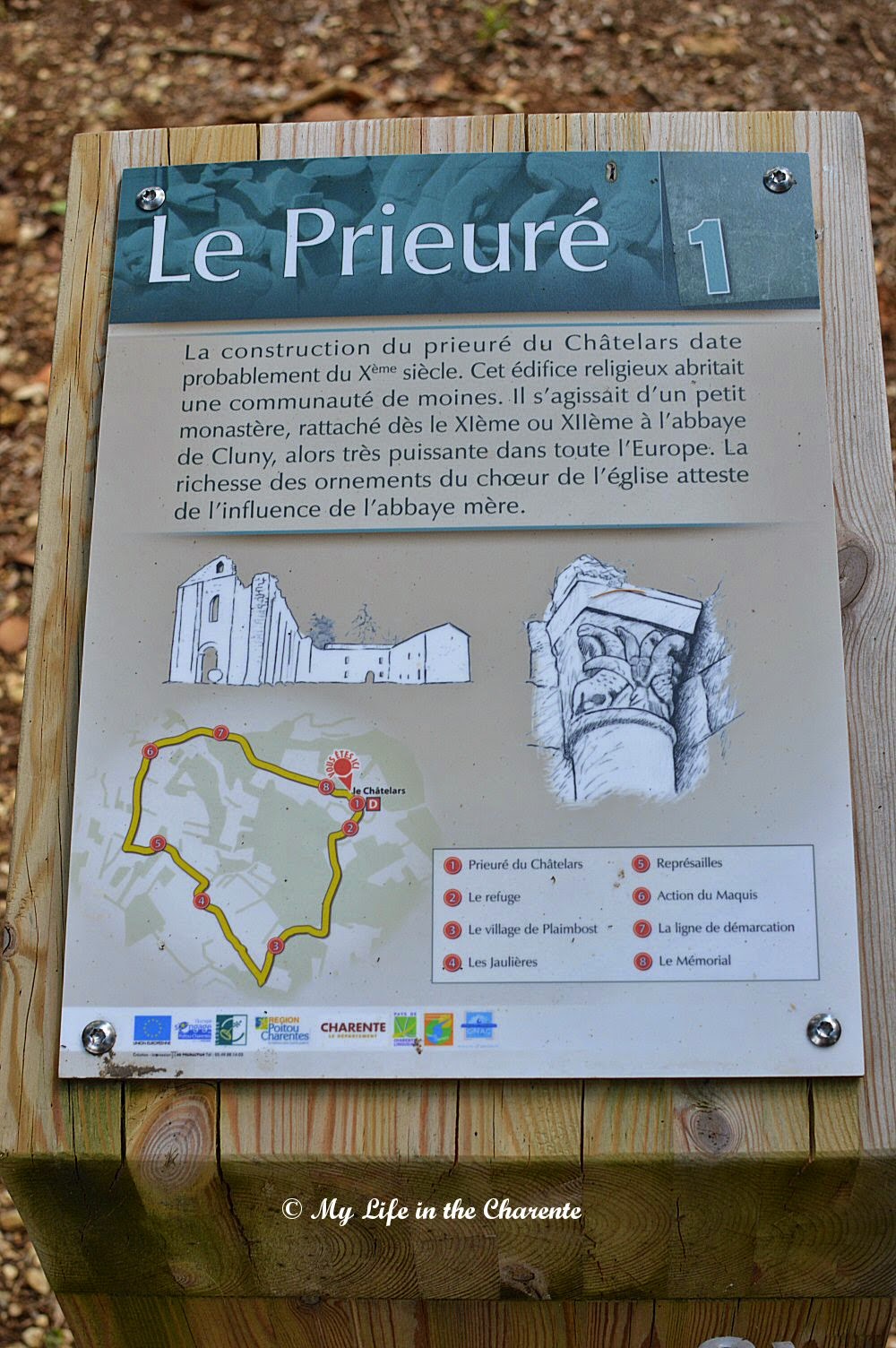 Close to the welcome sign is another, identifying the ruins of an ancient priory  probably built in the 10th century. The Resistance fighters built a platform high in one of the priory's towers, in order to observe the activities of the occupying troops in the nearby town of Chasseneuil-sur-Bonnieure. 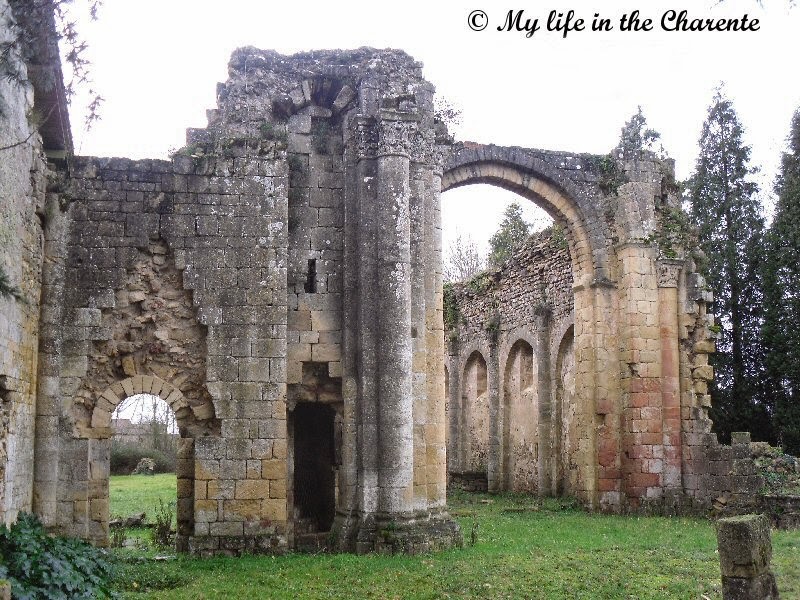 See more about the abbey HERE 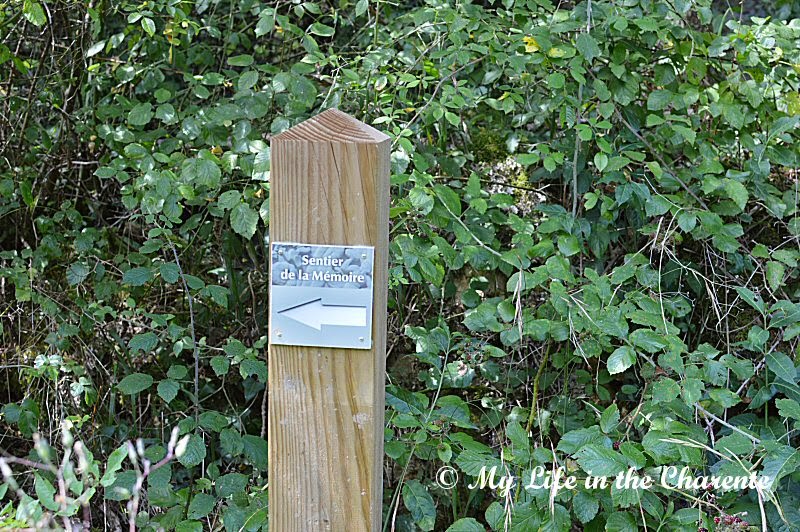 A direction arrow at a junction of pathways. 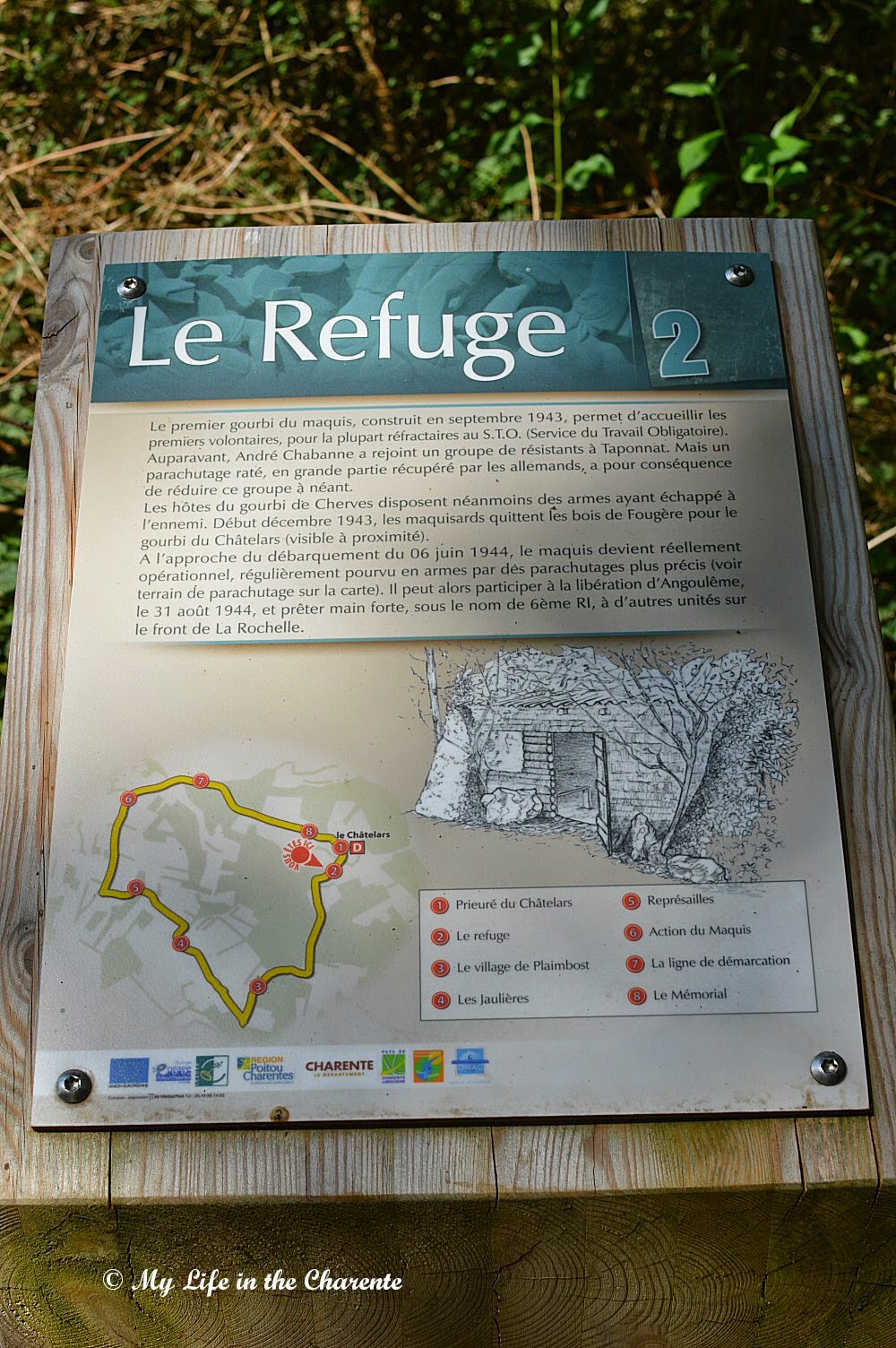 Not too far off the path and guided by arrows, you find the "gourbi" - a foxhole, deep in the woods, where resistance members would have gathered. Many were young men escaping the S.T.O - compulsory transportation to Germany as forced labour. 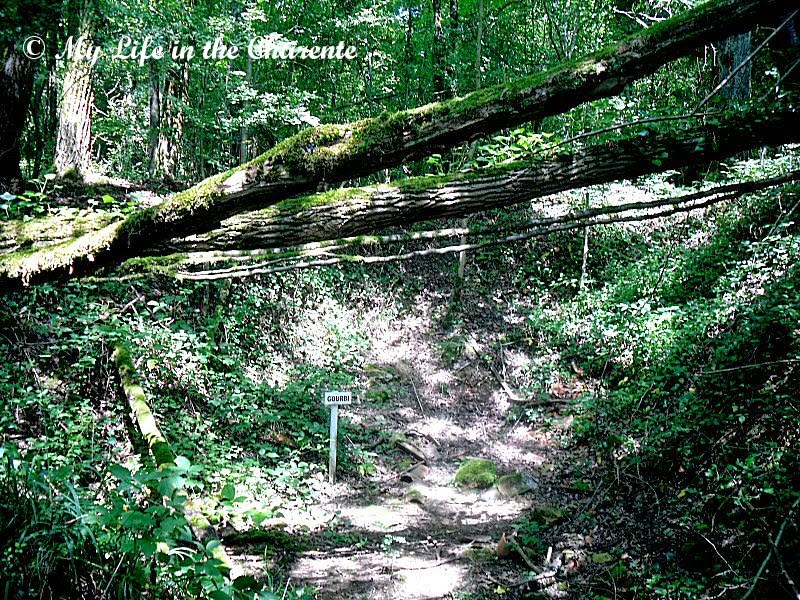 The hideout has obviously seen better days, but I hope you can imagine a timber roof structure covered with clay tiles! The sign above includes a sketch of what the entrance may have looked like. 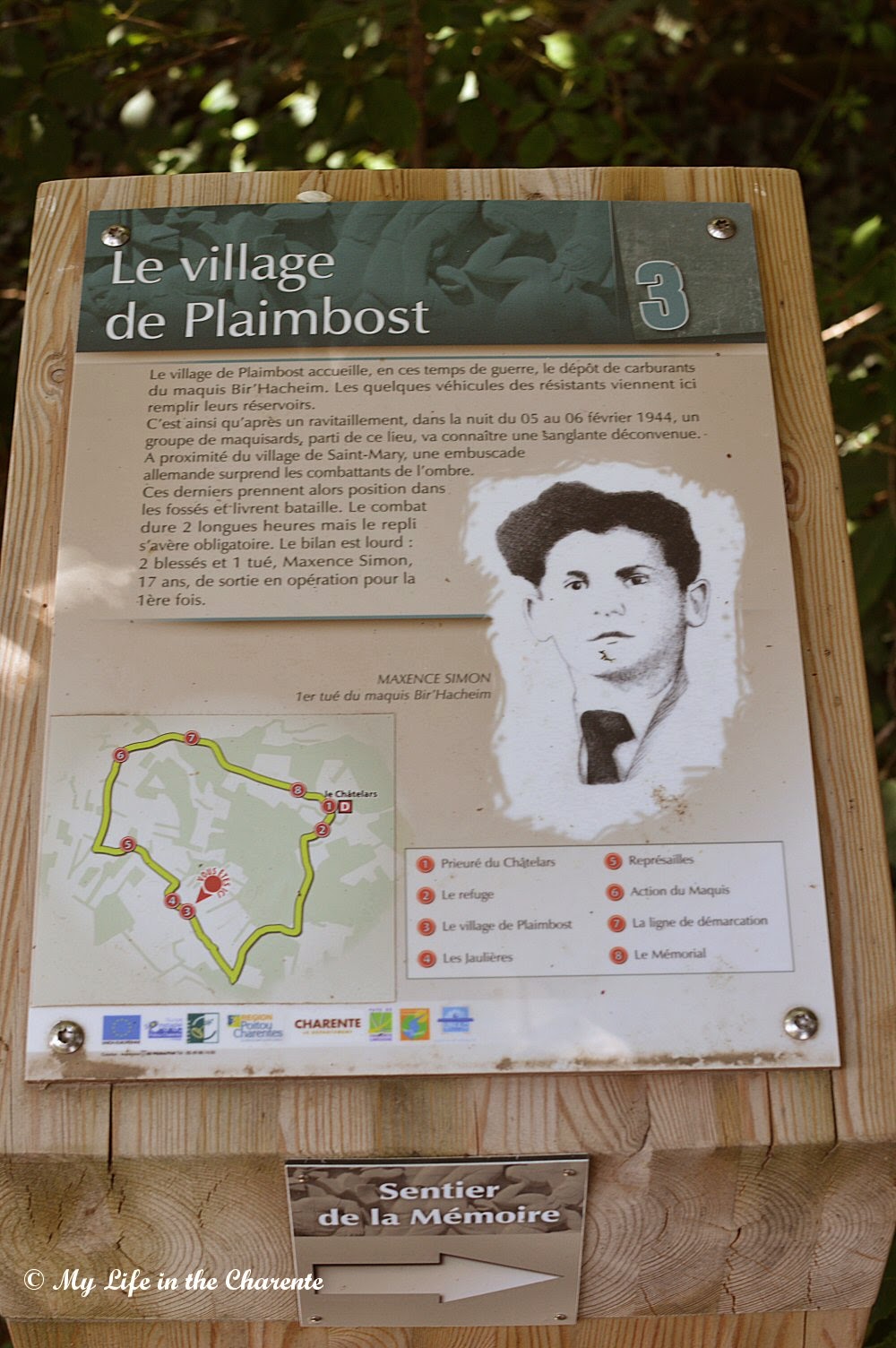 The village (pronounced "Plam-bo)was where the Resistance had their fuel depot. After refuelling here on the night of 5 February 1944, a Resistance patrol was caught in a German ambush at Saint Mary, another village, a few miles away. Maxence Simon, a 17 year old Resistance member, out on patrol for the first time, was killed in a two hour gun battle. 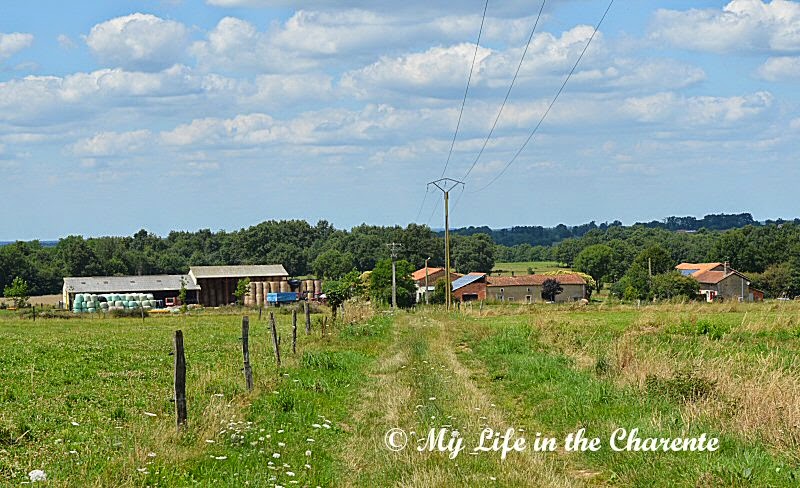 The village of Plaimbost along the route. 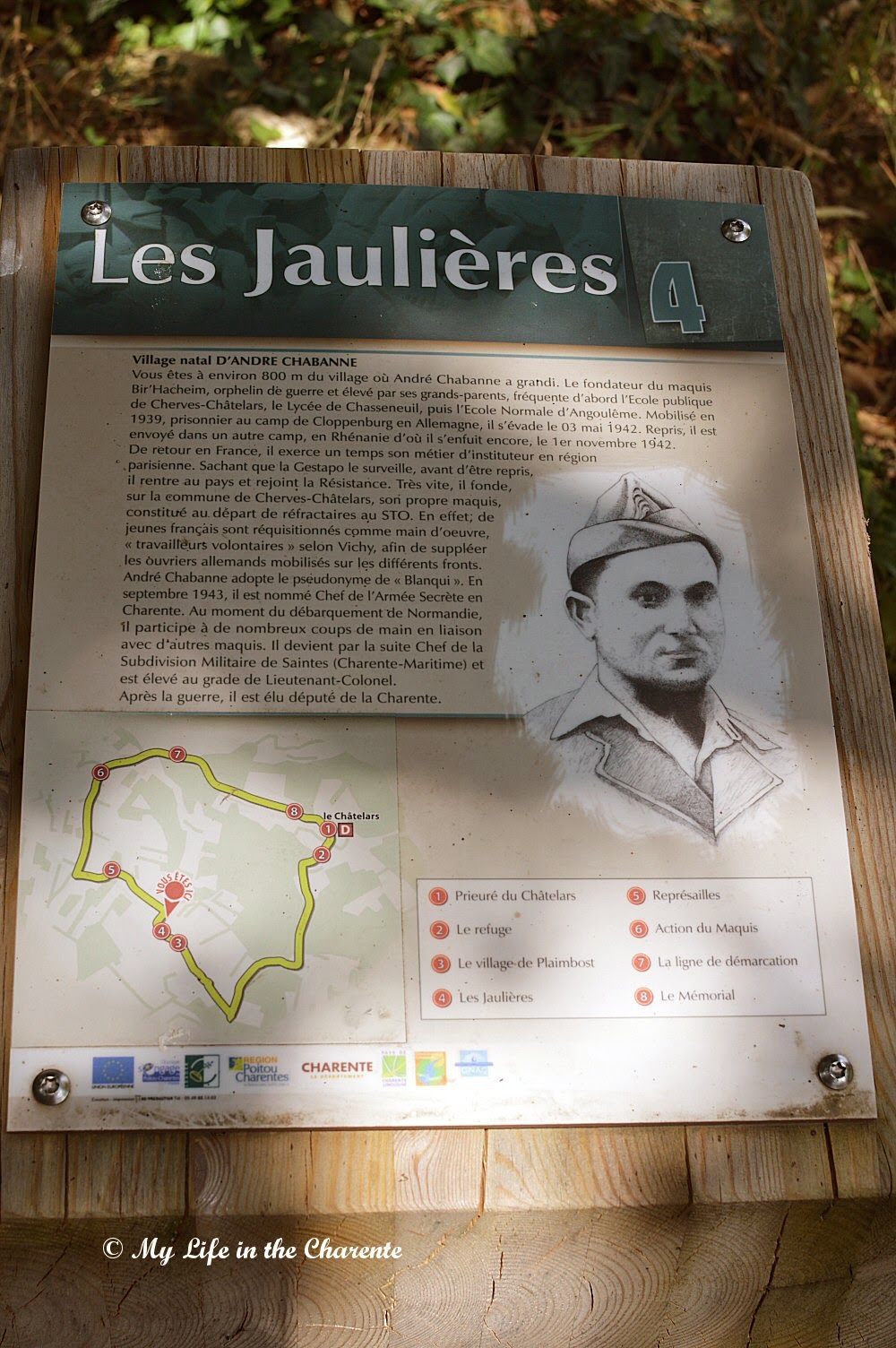 Andre Chabanne was brought up by his grandfather in this nearby village, after being orphaned in the Great War. He went to school locally and in 1939, joined the French Army. Captured in 1942 and sent to Germany, he escaped, but was recaptured. Six months later, he escaped again and went to Paris. Knowing that the Gestapo were watching him, he returned to the countryside and rejoined the Resistance, later founding and commanding the Bir Hacheim group. His code name was "Blanqui". He survived the war, but died in 1963, killed, I understand, in a car accident. 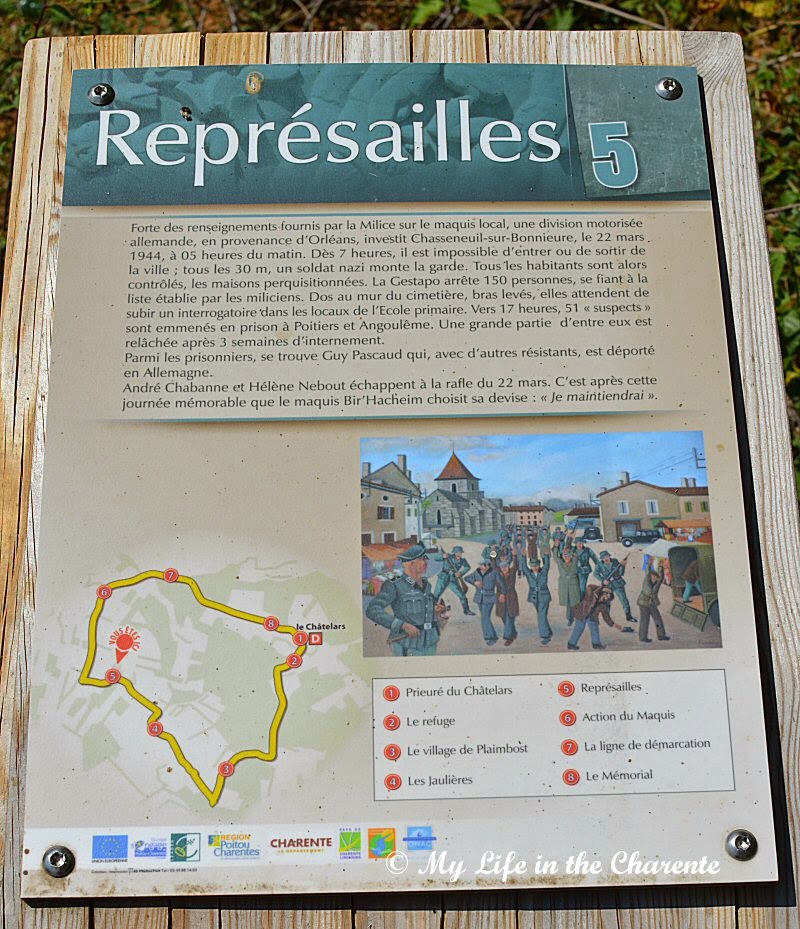 Reprisals -supplied with information from the French Milice about the Resistance, a German motorised division surrounded the town of Chasseneuil-sur-Bonnieure on 22 March 1944 and the Gestapo arrested 150 people. Many were later released, but Guy Pascaud, with others, was deported to Germany. 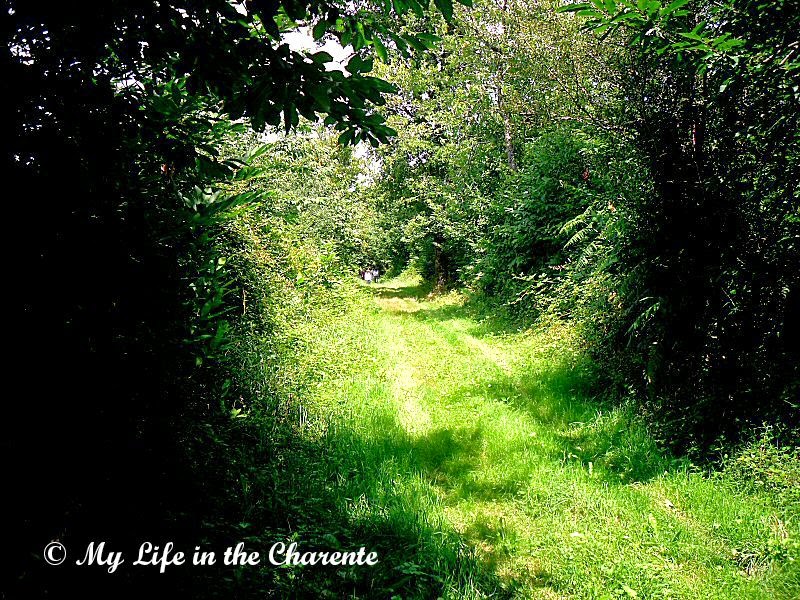 A grassy lane along the route 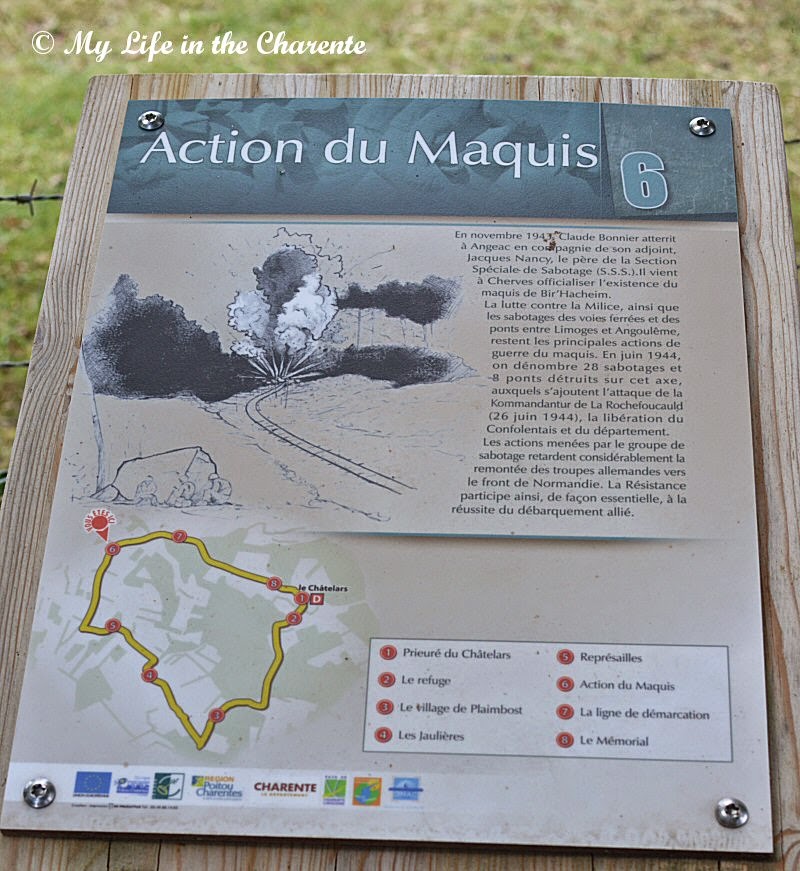 The main activity of Bir Hacheim was sabotaging of the vital railway line between Limoges and Angouleme. In June 1944, they attacked the German command post at La Rochefoucauld, a nearby small town. In all, their disruptive and harrying tactics forced the Nazis to divert important troops to the Charente area from the Normandy battlefront. 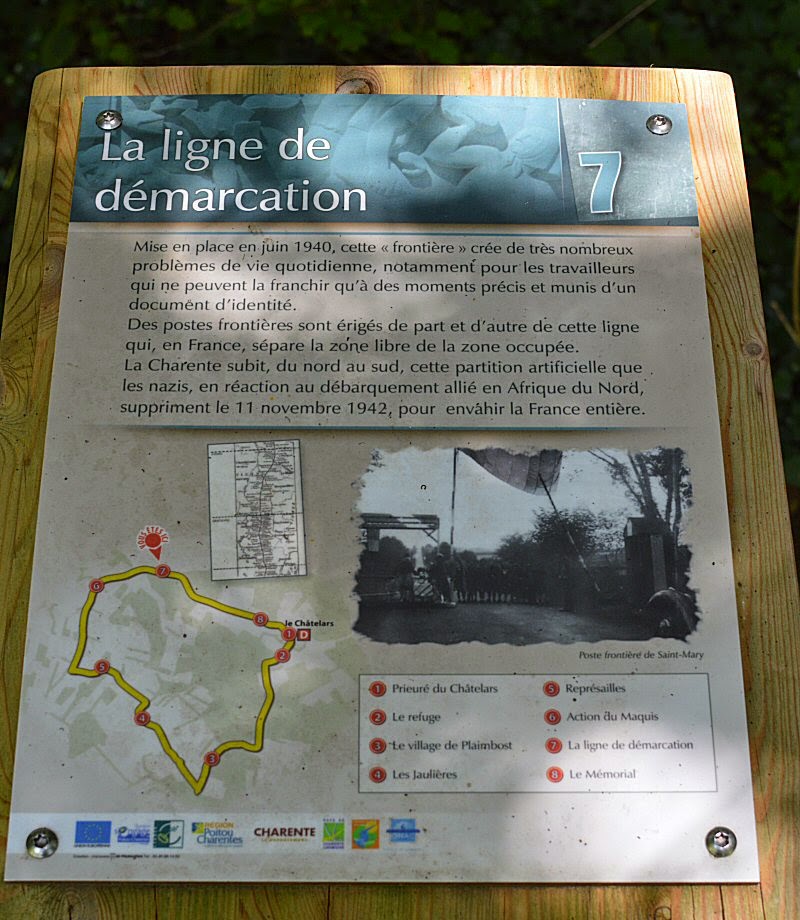 Put in place in 1940, this artificial border was created between the area of France occupied by the Nazis, generally to the North, and the "free zone" or "Vichy France", generally in the South, controlled by the French "Milice" (Police), who were  collaborating with the invaders. Identity cards had to be produced to the guards at crossing points and the Line caused great disruption in the everyday lives of French people living near the border. 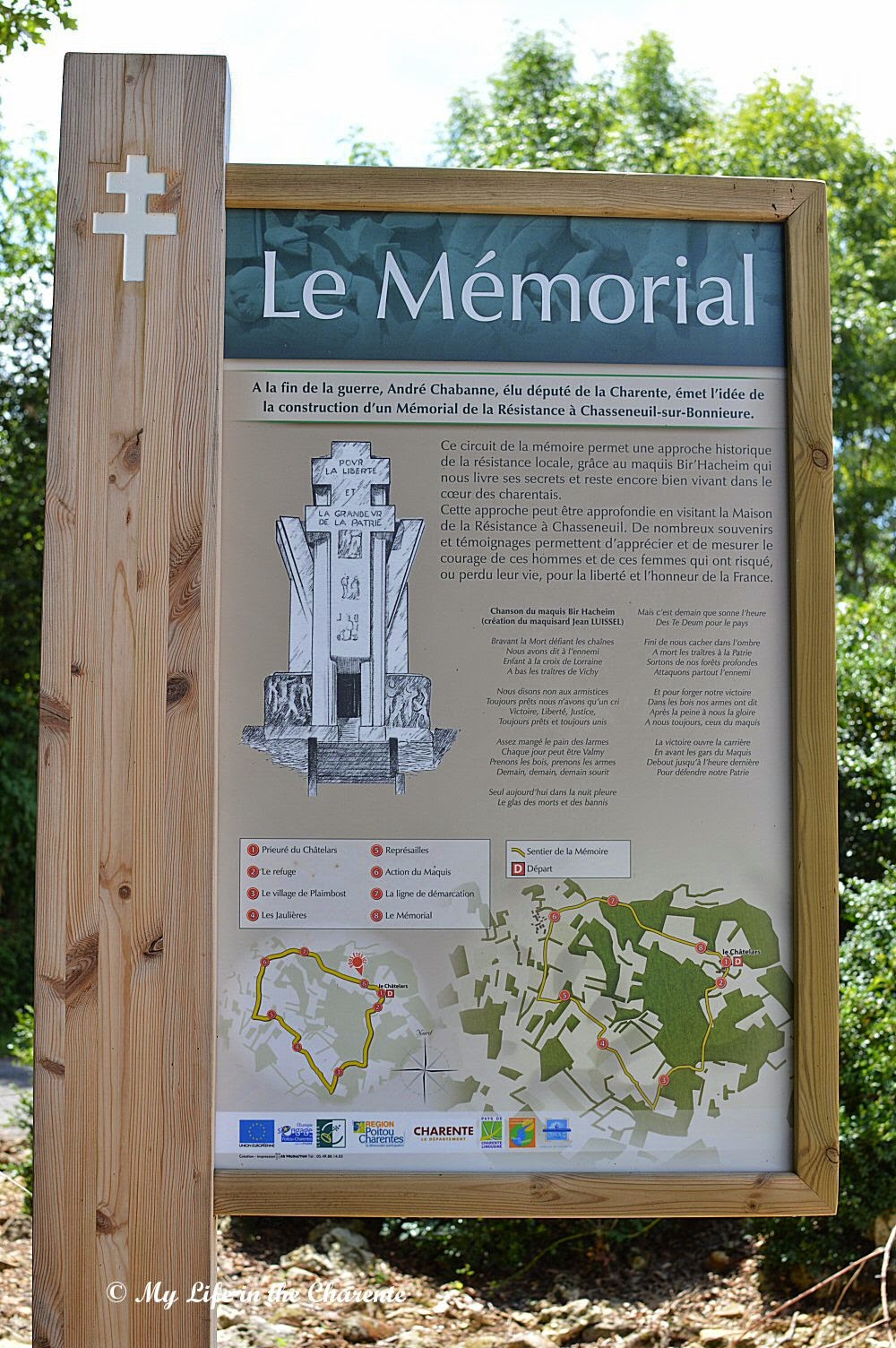 You can see more about the Resistance Memorial HERE 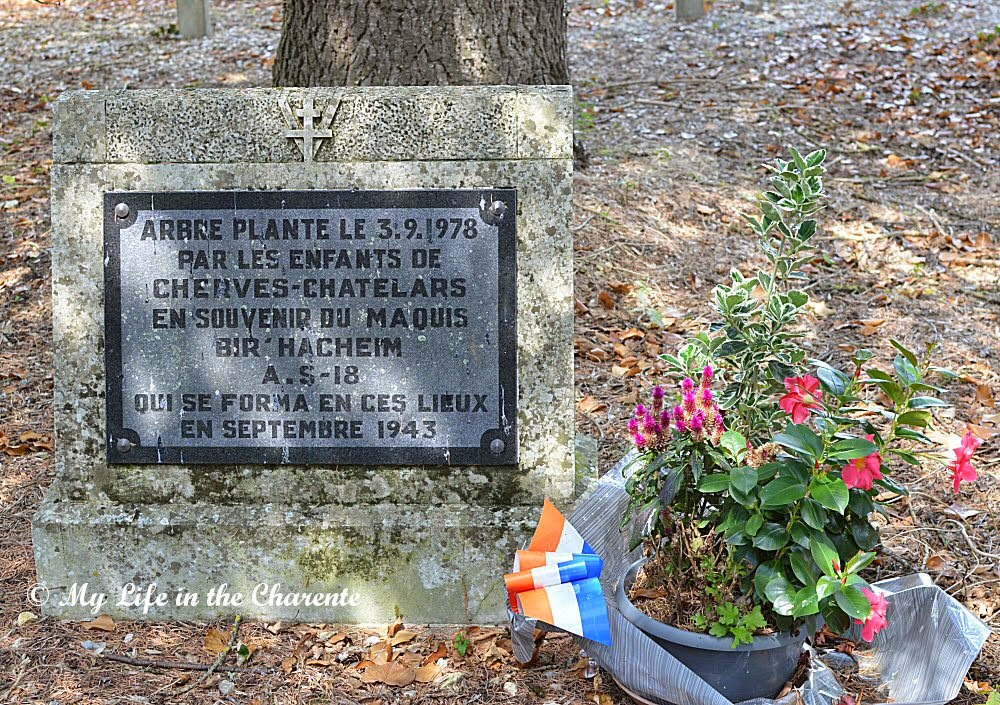 Stone plaque at the foot of a cedar tree planted in 1978 in Le Chatelars to commemorate the activities of the Maquis Bir Hacheim.

See also My Life Before Charente (updated 9 March - I will catch up in winter!)
and my daily blog
Photo Diary
Posted by Diane at 12:11