Church of St Martin at Ventouse


While driving back home a few weeks ago, through the rolling hills around St Angeau, we passed near the small village of Ventouse, and off to our left, we saw the tower of a lovely little church; this definitely warranted a diversion! The village is situated a few hundred metres north of a long straight east-west road built by the Romans to follow a low ridge through the landscape. The settlement bordered to the north by the river Sonnette, a narrow and very twisty tributary of the Charente.


It is today home to only 121 inhabitants, but in the Middle Ages, it must have been important enough to warrant this very sturdily built place of worship! 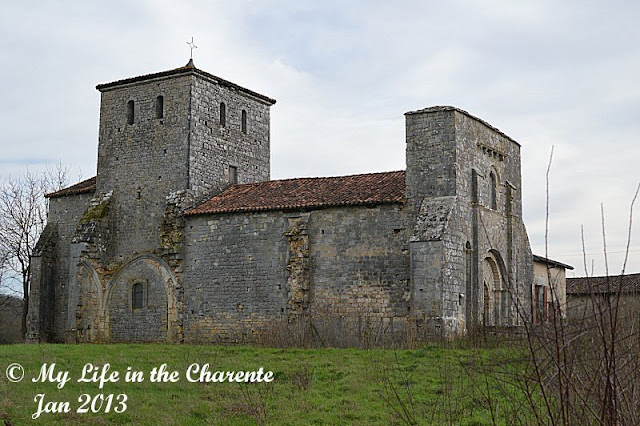 The village church is dedicated to Saint Martin, was built in the 12th century in the Romanesque style and has been a monument protected by the French authorities since 1925. The photo above shows that it has undergone some modification in its history and several of the buttresses can be seen to be the worse for wear! The small single storey, more recent, extension seen on the right seemed to be the priest's accommodation! 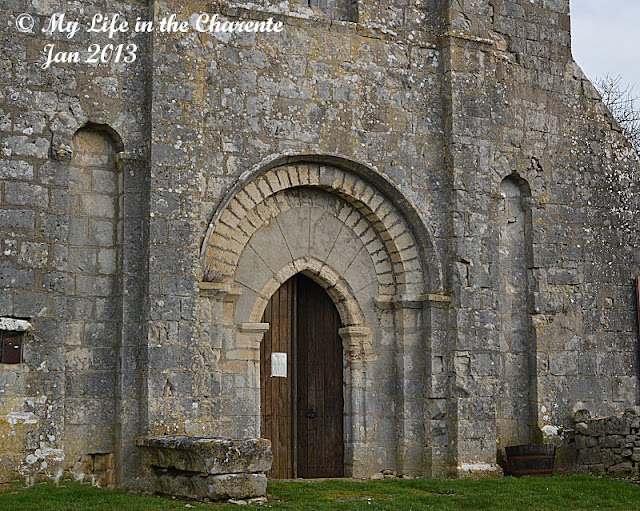 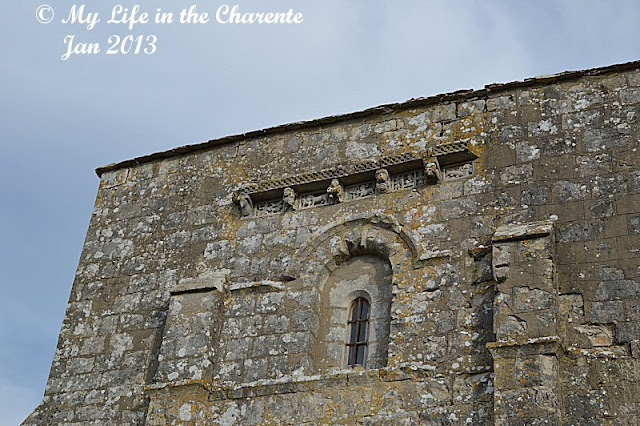 Available commentary on this feature over the front door refers to six corbels (the right hand one having presumably fallen off!), two of which represent the seven deadly sins. Working from the left, they are apparently Wrath (a man tearing his clothes), then a roughly carved and unidentified figure, the third being Gluttony (a man devouring a cake), fourth is a man wearing a barrel (is that a sin?!) and fifth, a man tearing his hair. The missing sixth corbel was a bird's head and between the corbels is further decoration showing a siren, a Sagittarius and a hunter with his dogs. It's fascinating to see subjects important to the sculptor and the villagers all those years ago! 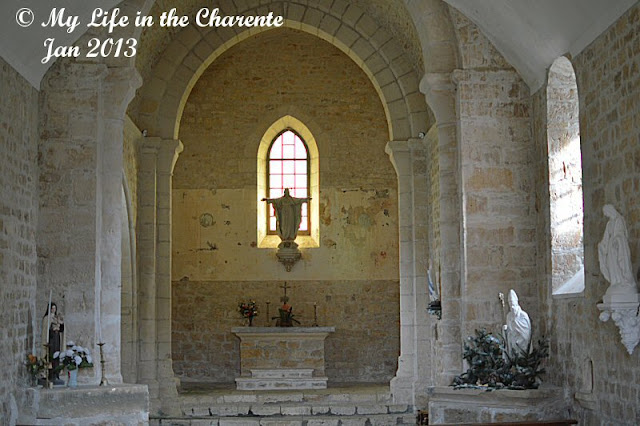 The very well preserved nave, looking towards the altar. This part of the church is said to measure about 180 square metres (roughly 2000 square feet) 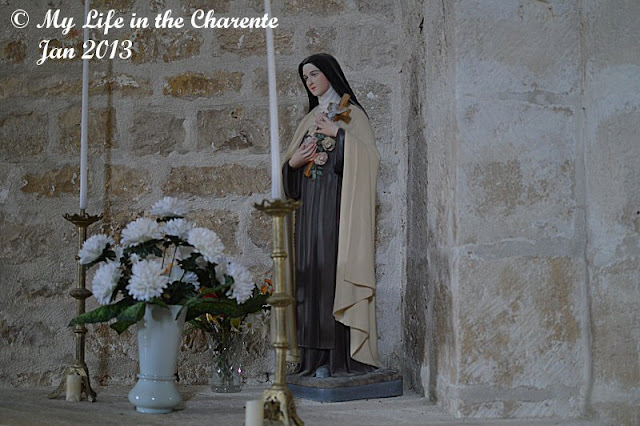 I have been advised by my followers this is Saint Teresa, I gather that the fact she is holding roses is a give away. Not being a catholic I was unaware of this. The shrine is immaculately kept with fresh flowers. 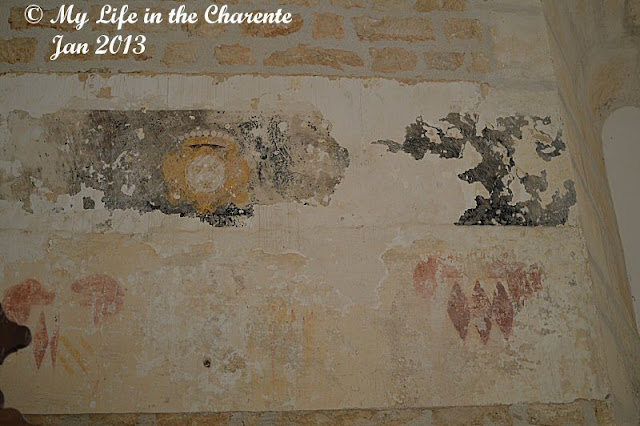 Above and below, fragments of ancient wall painting; this rich decoration  must have been a delight to the parishioners all those hundreds of years ago, and the undoubted cost  of this embellishment gives a further hint of this small building's former importance! 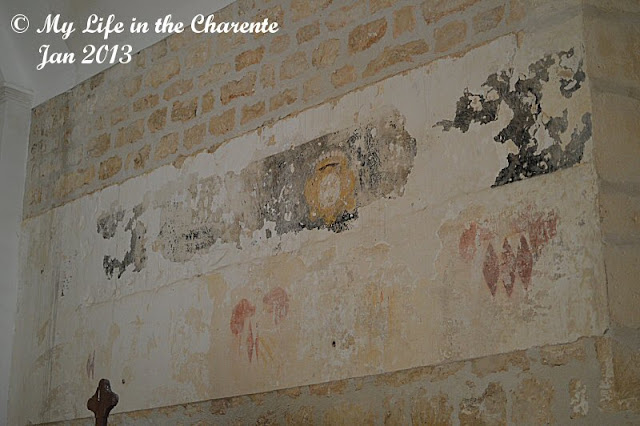 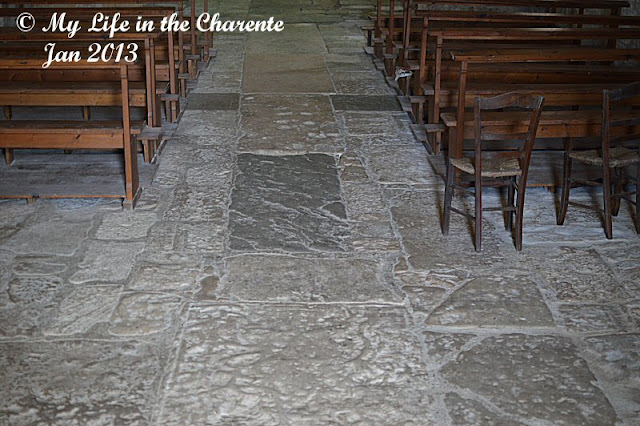 The stone flag floor has seen some damage and wear in its life! Seating for 100 people, maybe? 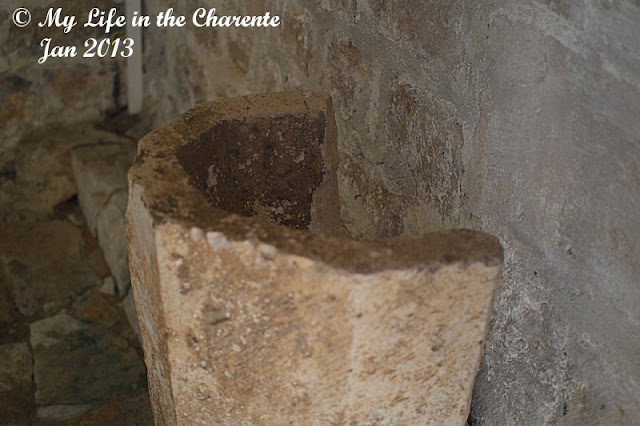 This stone looks very old and I wonder if it is possibly part of the original font!! 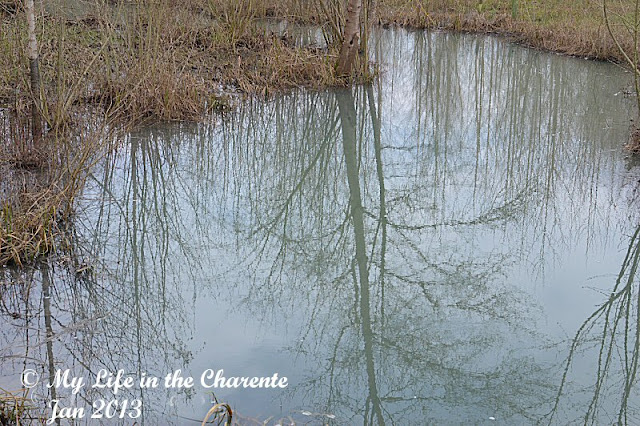 After leaving, we encountered the above-mentioned river Sonnette, which was that day well and truly in flood. We seem to be in a spell of endless rain and even our lawn at home (and we are on high ground)  squelches with every step we take! 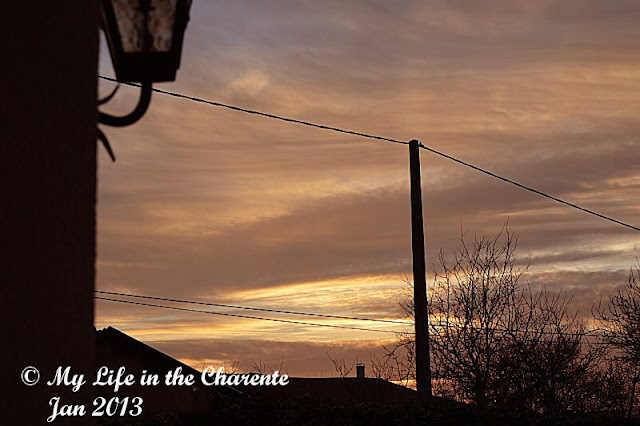 This was one of the first sunsets we had seen for ages and even this was very half hearted!

and my daily photo diary at http://photodiarydps.blogspot.fr/

Please note that 'The sun is shining and some time was spent in the garden' has been transferred with it comments to its rightful place at my daily   Photodiarydps.  Apologies for the error!