I discovered the small town of Bourgtheroulde-Infreville (bit of a mouthful - see later!) in Normandy in the summer of last year, when I was driving home alone from the UK. To break the long journey, I had thought that I would be able to find an overnight hotel stop en route  at a mid-way point in northern France, near Rouen,  but the only room available was at an astronomical price and so I kept driving! What I had not realised was that it was a long weekend, and all the French were taking advantage of the break.  I scouted around the hotels and B and B places off-route, but none had vacant rooms.  I was just getting back on to my route south, when I fell upon the said Bourgtheroulde-Infreville, and its hotel.  I thought of this as being a last opportunity, so, nothing ventured nothing gained, I went in to ask if there was a room available.  Great news, the family room was free and I had a bed for the night at reasonable cost.  In fact, when I saw the room, it really was a "family" room and I had a choice of beds!!  The owners were very friendly and hospitable, spoke good English and made me feel very much at home.


All this was reason enough, when Nigel and I drove back from the UK last month to book a bed there overnight.  It is a modest country establishment with 3 stars, the beds are comfy and the restaurant is superb, but not terribly expensive.  For more information on the hotel see La Corne d'Abondance.
We picked the evening menu that included an entrée, main course and dessert or cheese for €25.  I chose the terrine de canard de la houssaye while Nigel had the terrine de haddock au gingembre for the entrée. 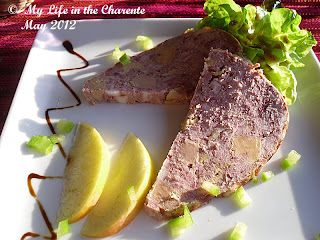 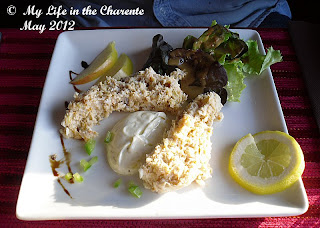 We both followed this up with dos d' églefin (we asked what fish it was and we were told cabillaud) poché à la hollandaise, as below. Very good presentation and very tasty!! 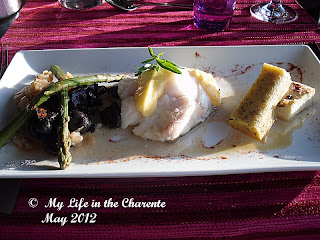 As there was a good selection of local cheeses in the fromage course, we chose that instead of dessert, and overall we were both impressed with the meal.
The town is named after Theroulde, who is believed to have been a tutor to William the Conqueror. He cast the foundations to a castle at the spot in 1025. Bourg in French means, amongst other related things, “market town”. Theroulde was assassinated in 1040. In the turbulent times of  France through the Middle Ages, the castle and town were developed and expanded. The present castle dates from about 1600, when the existing castle and town buildings were damaged and burnt during the Religious Wars (1562-98) between Catholics and Protestants. The town was a Protestant stronghold at the time and there are several Huguenot (Protestant) cemeteries in the area.
The village of Infreville  is mentioned in the early 17th century as being associated with senior members of the armed forces, who lived and were buried there. It was amalgamated with Bourgtheroulde in 1973.
With its location a day’s march from the large neighbouring town of Rouen, Bourgtheroulde enjoyed mixed fortunes in the 17th century.  It lay on the edge of the dangerous forest of La Londe, which harboured gangs of bandits, but the town itself was a place of active markets, an important trading centre and a stopping place for travellers and soldiers.
The 19th  century  saw the development of  many public facilities, including the Town Hall Square, the construction in 1858 of a primary school and the town hall in 1866.
Taking a walk around the town after breakfast the following day, we first came across the striking and well-kept Église Saint-Laurent de Bourgtheroulde. 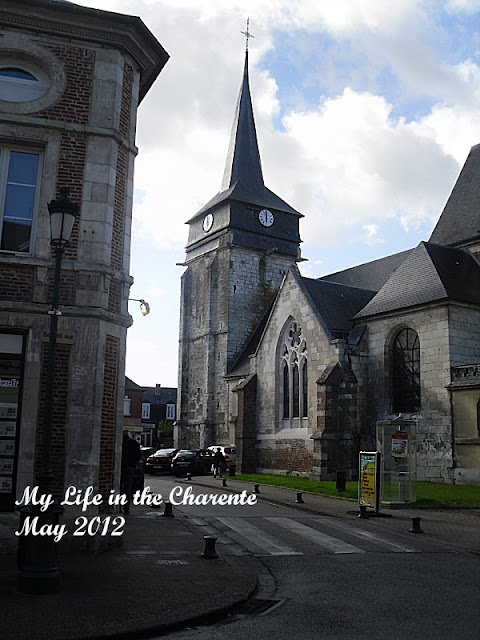 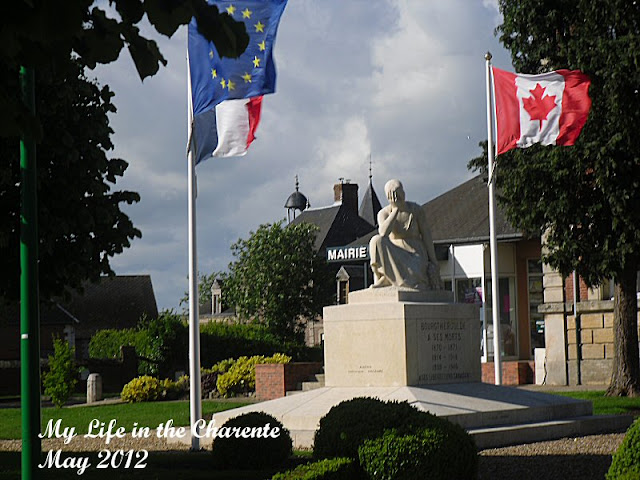 Memorial to the Canadian soldiers killed in the liberation of Bourgtheroulde on 26 August 1944. On the reverse side are transcribed the names of French soldiers of the town who fell in WW 1. 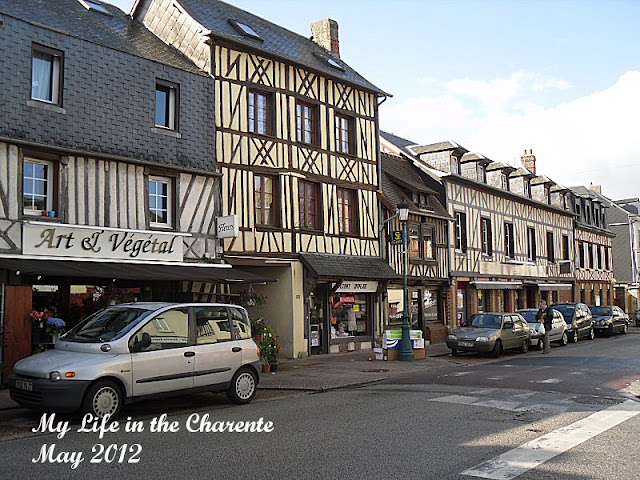 Above and below, some of the shops in the main street. 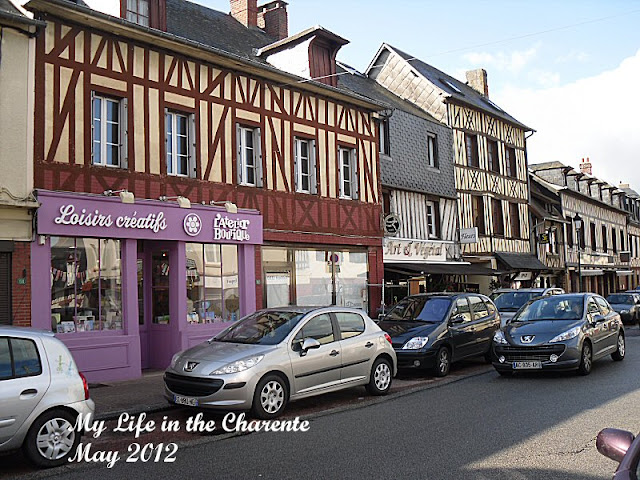