This is the time of year for wine fairs. All the local producers are eager to market their latest products and sell, sell, sell!! On Easter Saturday, we took a drive south-west to the village of Pranzac (I'll do another post on the village itself), for their annual wine and cheese fair, held over the 3 days of the Easter Holiday. It was their 34th fair, so they should know how to organise them by now! We have visited each year for the past 4 or 5 years, and the "formula" doesn't seem to change much. Everything is housed inside, in a tented camp, which more than paid for itself two years ago, when we arrived in a rainstorm, which continued for hours.
Happily, this year was sunny and dry and we found the offering had been expanded to include stalls selling clothing and lifestyle goods such as ornaments, handmade soap and local adventure holidays. We were just after "the basics", so we headed straight past these frills, to see what new wines, meats and cheeses were on sale. We carefully timed our arrival at 2 o'clock, just as the doors were opening, as I wanted to take photos before the crowds turned up and clear views became impossible. These fairs get impossibly busy later in the day, and just to get a taste or sample becomes very difficult!! This first photo is of probably the largest wine estate in the Charente - St Sornin. Much of the wine grown in the Charente is, I believe, used in distillation of cognac, or in the production of a local speciality - pineau - of which more later........ 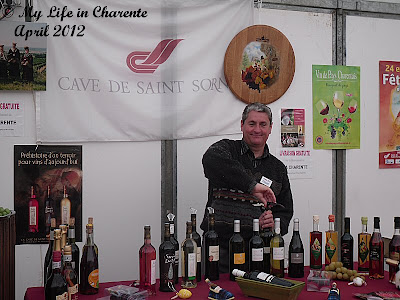 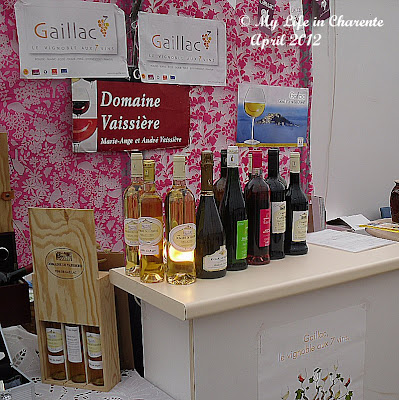 Gaillac makes quite inexpensive wine, which we used to drink regularly. It has not been easily available at out local shops recently and judging by the new (and to us, unpleasant) taste, they have changed the "recipe" for the worse. Plenty else to drink!! 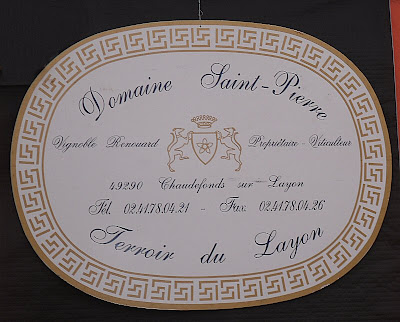 Domaine Saint Pierre looked pricey, and there was nobody at the stall, so we only took a photo! 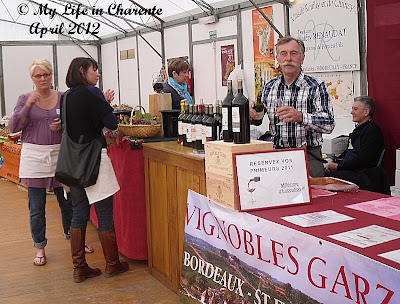 The gentleman here was more than happy to give us tastes of his selection, as we were his first customers. His effort was not in vain, as we did go back and buy some wine from him before we left. 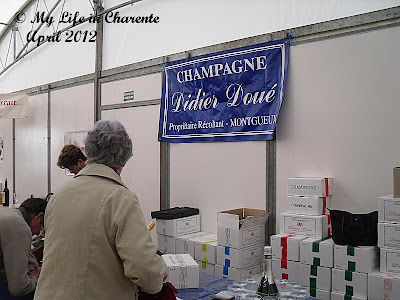 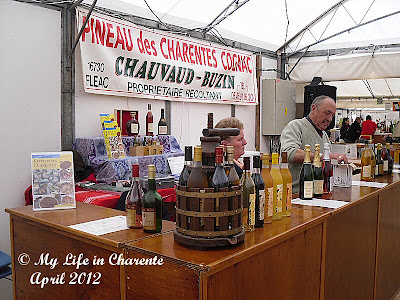 Pineau was being tasted and sold here. This drink is a speciality of the Charente; to read more about it, take a look at my post HERE 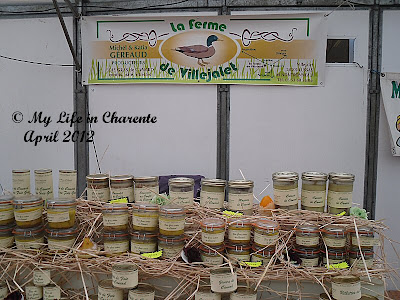 Foie Gras (goose or duck liver) is a French luxury. 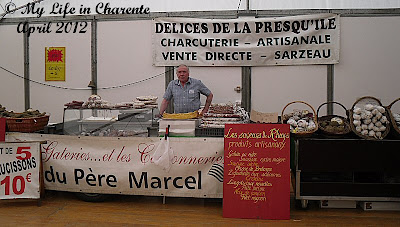 The charcuterie trade in France specialises in the sale of meats in various styles of preservation. Usually bacon, hams, terrines, pates and confit (mostly poultry like duck or goose, preserved in fat) -sounds horrible, but really a most enjoyable experience. 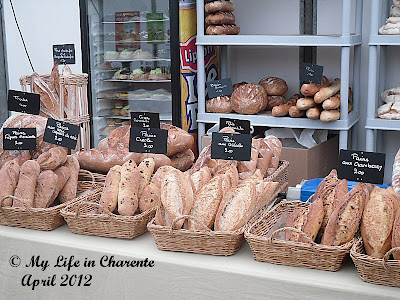 France of course would not be France, if "le pain" was not available!! The baker from Pranzac displays his wares here. 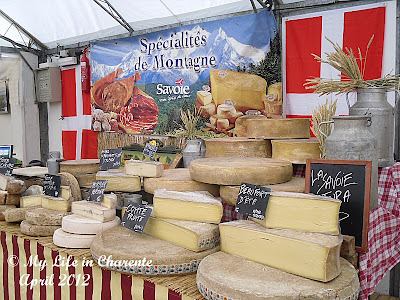 and of course the bread would not be the same, if there was no cheese to go with it! 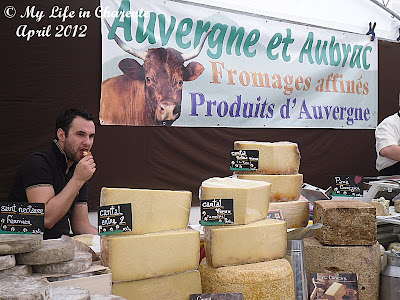 This man was obviously feeling a bit peckish and was nibbling on his own stock!! We joined him, and bought a small piece of Pave Correzien, the cube shaped uncut cheese on the far right of the photo. It's a very pleasant mature hard cheese, but not cheap! 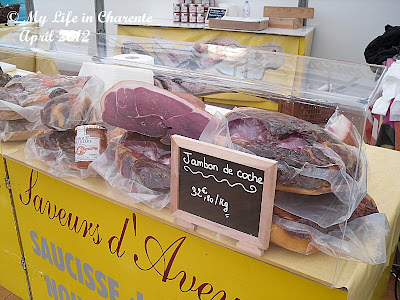 For variety, a photo of some local dried ham to further whet the appetite.
Google seems to have done everything in its power to hamper the production of this post or even prevent it from being published. If this is the latest new Google programme, they can keep it!!! Pictures would not load in the correct place. Some were deleted and have not been seen again. In addition, the font has a mind of it own, and I have been at the computer all day, so I hope that you get to read this. I apologise for any errors that you may come across I have given up.
Meanwhile I have started a new blog - in Google, I must be mad - Please take a look at
My Life Before Charente
Posted by Diane at 16:13

Labels: cheese, Pranzac, Round and About, wine