Well, we're back together, in France!

Firstly, thank you to everyone for all your kind comments.  I did manage to answer a few, but with one thing and another, I'm sorry that I didn't have time to get to you all.......


My drive back to the UK house went well, and I stopped off en route to say au revoir to four ex Rhodesian friends, who all live  in the English counties to the south of London.


I managed a couple a days of packing before I went down with the worst cold/flu that I can ever remember having! I felt terrible, but the packing had to continue, albeit much more slowly than before!  Nigel was also unwell, but maybe his winter flu jab  helped him avoid the full effects.   I  had my flu shot a few days later, so I hoped that would be the end of it all.  No such luck and I still have a really bad cough!


Nigel completed his last day at work on Friday 21 October and the day of moving (29 October) arrived quicker than we could bat an eyelid! Keith, our France-based "man and van" turned up as arranged, and with a neighbour's help, we had the van loaded quite quickly and on its way to France.


Keith and his capacious van provide a service we highly recommend to anyone moving to or from the UK to Europe.  He is friendly, reliable, reasonably priced and can pack like a magician; we never thought that it was possible to get all our bits into the van but manage it, he did.  He does deliveries, removals and collections, full and part loads,  works throughout UK, France and Europe including islands. and has  storage facilities in both UK and France.  For quotes and enquires, email keith232@hotmail.com 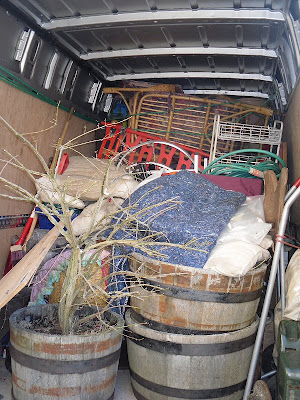 This is the back half of the van when the doors were opened! Up front was the fridge, the freezer, the tumble dryer, innumerable cardboard boxes, not to mention the euonymous plant in its barrel!!!
It had just passed mid-day when the van left and we were also ready to depart on the trip south ourselves, when we detected a binding front brake problem on the Clio. Luck has to be on your side occasionally, and on this Saturday lunchtime, it was!  One mechanic was still at our local garage and he sorted out the problem in double quick time. When Nigel asked how much he owed, the mechanic said his reward would be for us to have a safe trip to France! Exceptional (and all too rare) service!

At the moment we are in total chaos  dealing with a van-load of boxes, but the most important thing is we are both here at last. There is much sorting out to do but I will be back blogging when I have more time/ feel better.  A bientôt!
Posted by Diane at 17:11