As is well known, at the 11th hour of the 11th day of the 11th month in 1918, the Allied and German forces signed an armistice (technically not a surrender) which marked the cessation of First World War hostilities on the Western Front in north-east France. What is less well known is that hostilities continued in other regions, especially in parts of what are now Russia and Turkey, for some time afterwards.

The date was declared a national holiday in many Allied nations, to commemorate those members of the armed forces who were killed during the War. Observance of the day now includes remembrance of all those who fought and gave their lives in all Wars since then.
In our locality, sited near the boundary between Occupied France (about 60% of the country and controlled by the German army) and Vichy France (the balance, run by that part of the French army which had signed an armistice with the Germans and hence under their control) in the Second World War and hence an active area for the French Resistance, the day is particularly significant. One of the main roads through the area is named after Claude Bonnier, the leader of the French Resistance in the area.
Below is a picture of the Remembrance ceremony at our local war memorial. A small unit of the French Army was present to represent the country's military at this important occasion. 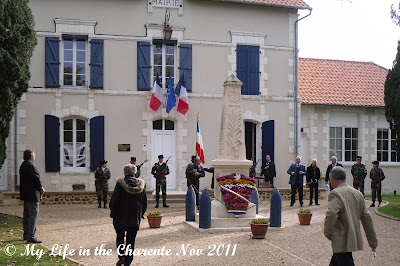 One of our local residents has an impressive collection of First World War memorabilia and the following three photos show a part of a small exhibition which he had laid out in the Salle des Fetes for public viewing. 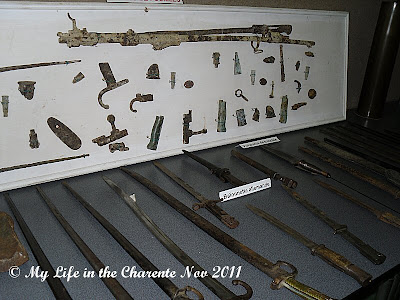 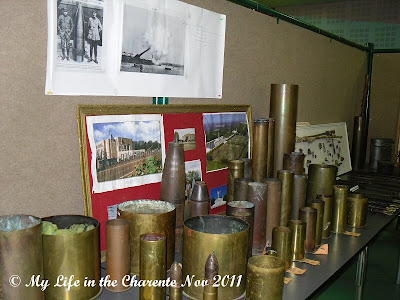 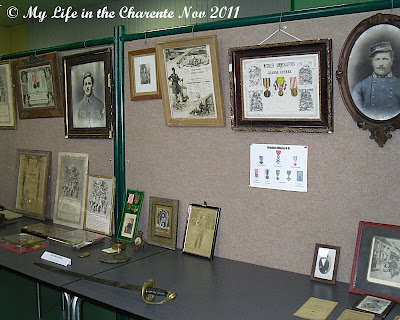 And to close, here is a picture of us at the Remembrance ceremony, all dressed up with poppies and warm clothing - a cold wind was blowing, but we were warmed up afterwards by a selection of whisky, pineau (a local drink 50% cognac and 50% wine) and pastis (an aniseed based spirit - Ricard is a well known trade name), all of which were on offer at the exhibition! 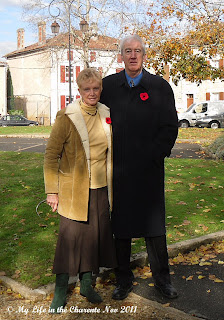 Thanks to Nigel for all his help once more in this post. For those of you who have kindly asked after my health, I am still coughing a little during the day, the new medication has helped, but at night I am still coughing badly.  My Dr is at this moment trying to make arrangements for me to see a specialist who we hope may come up with some answers.  With the continual coughing I suspect that I have now cracked a rib, but as there is little that can be done for it, I hope that it will heal in its own good time.  I have cracked many ribs during my riding days so I know the feeling well!!
Please note that my laptop is seriously playing up so if there are delays in my comments you know why!!!
Posted by Diane at 14:40