No, this is not the story of Mary Poppins, or of Dick van Dyke, but the story of my French roofer, who I discovered this year is a chimney sweep as well.   I was expecting to get a photo of a black, grimy face with white eyes peering out of it, but it seems the job is much cleaner these days, than when poor young children were taken on to do the job in the chimneys of days gone by.
Although we have owned the house for 6 years now, because we are not here in the middle of winter, we have not worried about the state of the chimney.  We did not know when it had last been cleaned before we bought the house, but we thought that maybe it was time we did something about it.  With a fire in the chimney and no proof of annual cleaning, the insurance will not pay out!!
It was not as easy as planned; the whole woodburner stove had to be uncoupled and moved forward so that he could cover the fire place, work from the top and collect all the junk at the bottom. 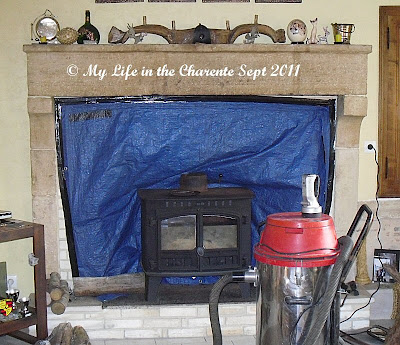 Having never seen a chimney sweep at work before, I was fascinated, and also delighted, that I would not have a soot covered salon 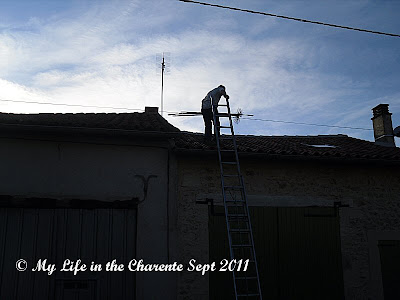 Up the ladder; sorry to say, the sun was in front of me, despite being in the late afternoon and I could not get a better focus!  Moving to the other side.... 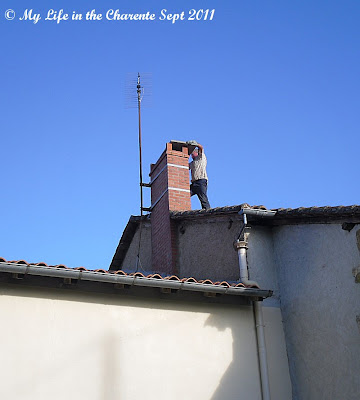 Removing the very heavy concrete block from the top of the chimney.  Our chimney sweep is very short and slim but is incredibly strong. Earlier this year he carried a railway sleeper across the garden for me single handed!!! 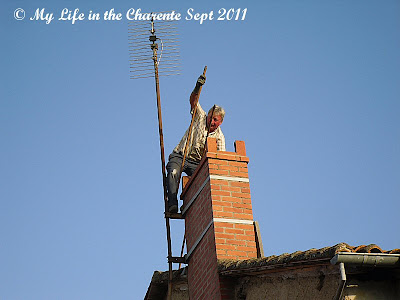 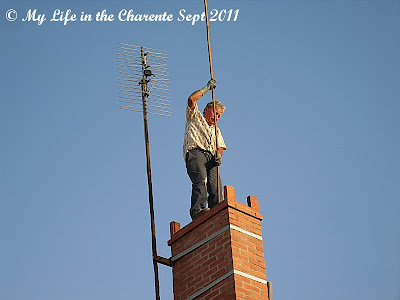 Luckily he has good balance 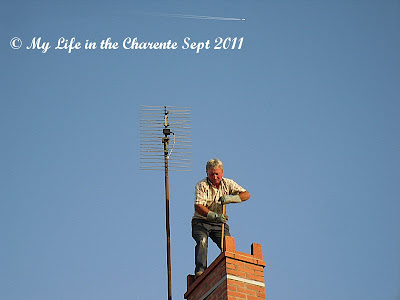 and no fear of heights!!  Health and Safety? what's that? 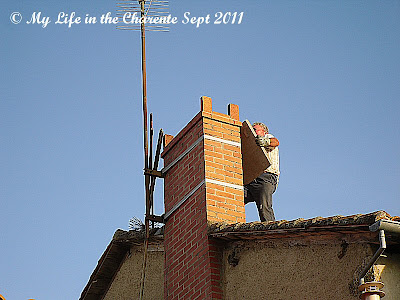 The difficult part lifting the concrete block back up again.  I could hear the grunts from the ground and could see the straining muscle. 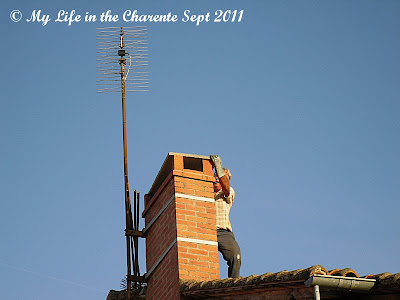 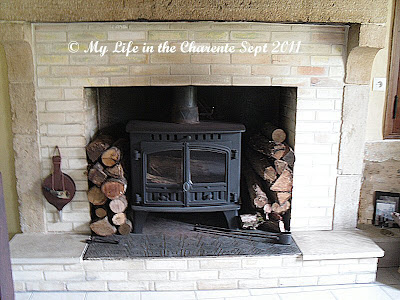 Just look at that, all spotless and back in place.  I might add I am very glad the blue cover was there; at least 15cms (6 ins) of black yuck, spread over the whole floor of the fire place, was vacuumed up - so pleased it was done, but then it all has to happen again next year!
Just as the work was completed, our neighbour  (who also wanted his chimney cleaned) arrived with the deputy mayor, and we all celebrated the achievements with a drink or 3.
Posted by Diane at 13:37