Why I have not been very visible!!

Apart from trying to catch up with the 1001 things that needed doing after being away over winter, including getting the garden ready for spring planting, I have been learning how to put in ceilings! I asked a friend last year if he would help me, not knowing at the time what a hard taskmaster he would be!! His day started just after 08h00, with a typical 2 hour lunch break, but then he worked flat out until after 19h00!! During his lunch break, I  went on working to get the garden back into some sort of order. These were  long days for me! When work finally came to a halt in the evening, we would sit down with a bottle of pastis between us, discussing what we would be doing the next day. I would then phone Nigel to let him know how things were going and quite often just fell into bed, too tired to get a meal for myself.
The ceiling, with thick insulation, has gone into our barn under the roof, which will help warm the lower part of the barn, where the lounge and a bedroom are. When we have saved a bit more money, we hope to turn the upper part of the barn into another spare room and two offices, one for each of us. Mine will be for sewing and painting in my spare time (what spare time!).
You can see from the photos how my days passed, and my blog almost came to a standstill from lack of time.
﻿ ﻿﻿ 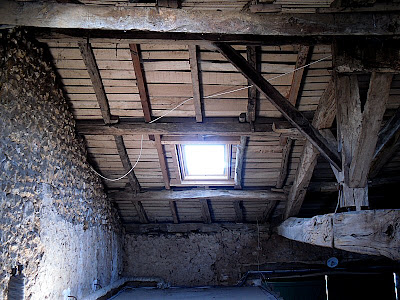 This is  how it all looked before starting; I hope this bit will
become a spare room. 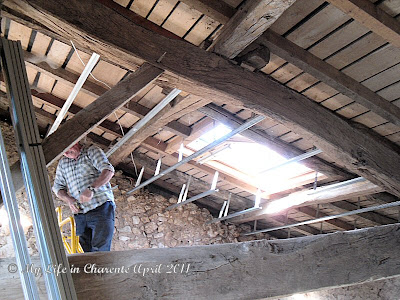 Putting up the stabilisers, to which the ceiling boards will be attached. 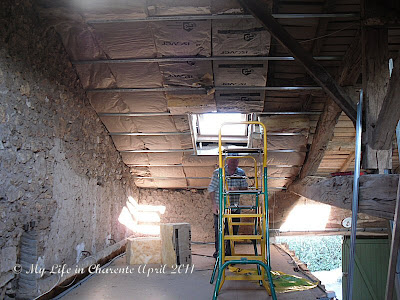 In goes the 300mm insulation; great for keeping heat in, but I hate to work with it - it gets into everywhere! Parts of the work here on the right were 6 metres (19 feet) above the barn floor, great care was needed! 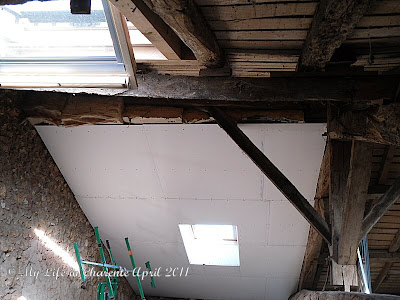 Finally, up go the ceiling boards; phew, I did not realise how heavy they are!! 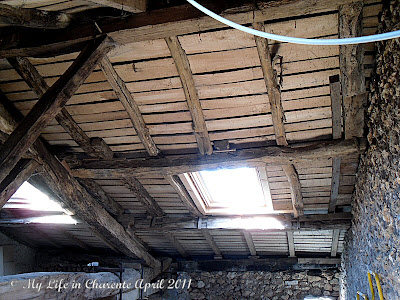 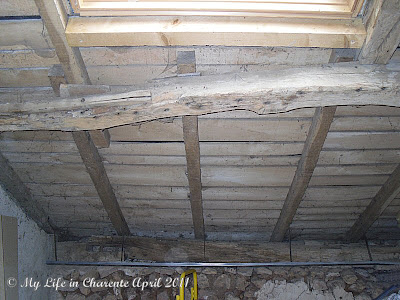 Showing the beams in 'my office', you can see clearly here that nothing is straight and life is very complicated because of it!!! 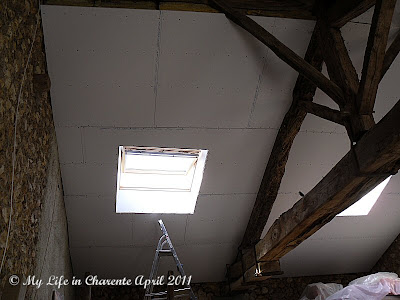 Finally, after 6 days, we had it all finished, and I was a much wiser (and more tired) person at the end of it all.
If you look carefully above on the beam on the right, you will see a small bird sitting there.  It is a Black Redstart; we have two of them who have apparently decided the insulation will make great nesting material!!  They have discovered they can get in both above and below the  main barn doors and have starting removing bits of insulation and scattering it all over the place.  Today we have tried to block off  the largest gaps, but whether we have succeeded, only time will tell.  Dear little birds but..........
Thankfully we had  the ceiling work finished before Nigel flew over 15 April,﻿ but it was a very tired lady who drove to the airport.
We had a visitor soon after Nigel's arrival, and although I have seen the Green Lizards fleetingly in the garden, I have never seen them near the house.  This photo was taken through the glass in the passage door, so as not to cause alarm and flight. We had a good view through binoculars, although the tail was hidden. 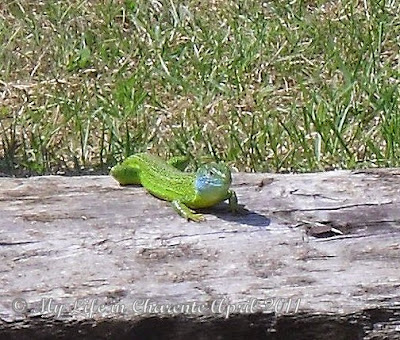 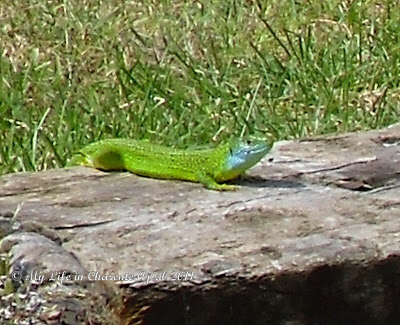