A visit to Angouleme and Strikes!

While D and D were staying with me last month, we decided to take a trip into Angouleme on the Monday before they left. Angouleme stands on a rocky promontory, bordered by the river Charente and its tributary the Anguienne. I offered to drive, as the skills for driving there are somewhat complex, if you do not know  your way around. One-way streets and confusing signs in the city centre seem to be only part of the problem, with the very busy roads. D does not drive on the right of the road under normal circumstances and I did not want a divorce on my hands!
Well, it was a good job I decided to drive. As we arrived near the railway station we realised that something was in the air, as there were many people hovering around with banners and placards. Police were in all directions and I was turned away from all the roads I knew, in what was to me the wrong direction; as soon as I could turn right I did just that. I found myself in a long tunnel that I had never been through before, and it seemed we went under the whole city and came out on the other side. Phew, where to now? I had the GPS with me but 'he' (I call him George!) seemed as confused as I was, and was keeping very quiet, just showing a series of maps that were of little help. We headed down a road that suddenly branched into two; there was a one way sign in the middle of the two roads, did it mean the right or the left branch was one way? Luckily there was a gap in the traffic and I pulled over to the side where there was a  car park entrance. As I had no card to open the boom this was not going to work for us. A Frenchman saw our dilemma and came over to see if he could help. As by then I was getting a bit wound up, it was a good job the man spoke excellent English. "Take the road to the left" he said, the right hand one was the one way road. I would soon see the market and then I would know where I was. Thankfully, he was spot on; we soon found ourselves in an area I recognised and we  were able to park in the excellent underground car park below the covered market. Merci beaucoup Monsieur, if you should read this.
We next discovered that there was a huge demonstration going on, with, I would guess several thousand people. The French trade unions were launching strikes against President Nicolas Sarkozy's unpopular pension reform and seeking to force his government to go back on plans to end retirement at 60. Unions and the left-wing opposition say the plans to raise the retirement age to 62 by 2018, raise civil servants' pension contributions to private sector levels and make people work longer for a full pension are unjust. We found out later that train services were cut by half or more and the airports had come to a complete standstill. How lucky D and D were only flying out on Wednesday!
Having established what was happening, we then took a walk around the city sights, making sure we kept well out of any areas where there was any sign of police or protesters!!
It was interesting to see that they were putting up all the barriers for the car road race which was to be in Angouleme two weeks later. See http://lifeincharente.blogspot.com/2010/09/for-car-lovers-out-there.html 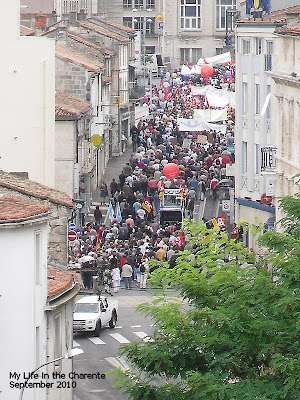 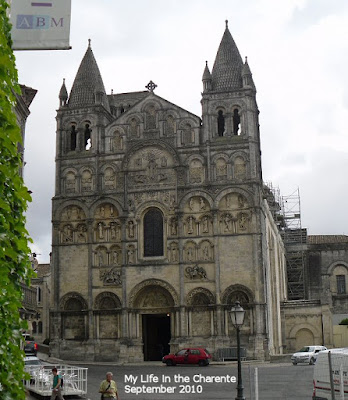 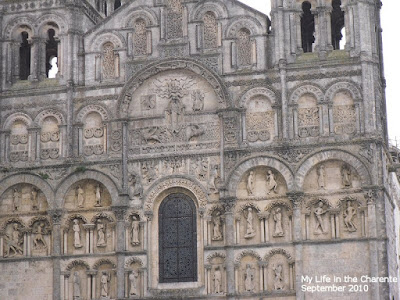 There is a large amount of restoration going on at the Cathedral, both inside and out.  This has been ongoing ever since we bought our house in in 2005.  It will be interesting to see the final result.  The present building was preceded by three earlier churches. Nothing is known about the first one. The second one was completed in the year 506, then a great fire swept through the city in  981.  The work on the present day cathedral started about 1110 and was completed around 1128. Outstanding craftsmanship from the Middle Ages! 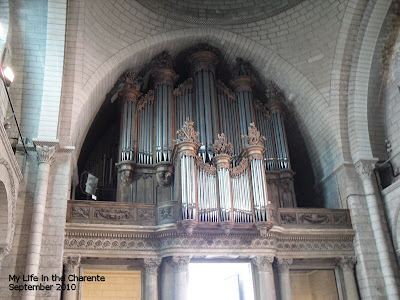 The organ inside the Cathedral. 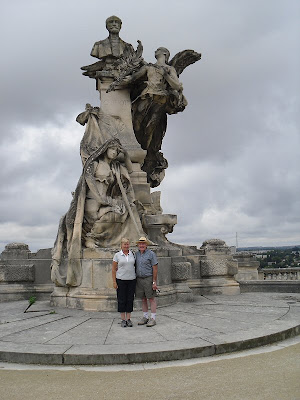 D and D by the statue overlooking the wonderful view of the countryside from the heights of old Angouleme.  The statue was created by Raoul Verlet in 1897, and was erected in homage to the president of the Republic, Sadi Carnot who had been assassinated three years earlier. 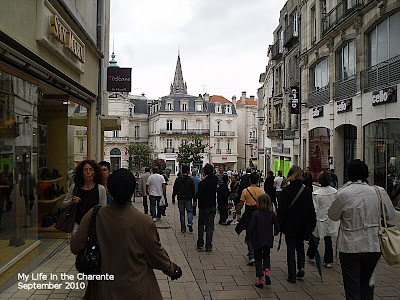 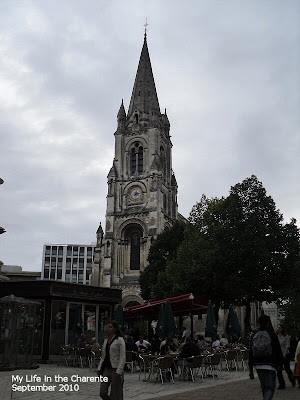 Labels: Angouleme, Church, Round and About