Round and About - Oradour-sur-Glane

My friends (D & D) who visited me earlier this month from Ireland spent the first few days sightseeing  without me. As our new gates had just been installed, the wood needed to be painted as soon as possible and before they had any rain on them. I have now almost finished the painting and I will show you the finished result  quite soon. It has been very slow, as I have been trying to do other jobs as well, and an opaque finish took many more coats than I had expected.

D and D's first visit was to Oradour-sur-Glane which is a commune in the Haute-Vienne department in the Limousin region in west-central France. The original village was destroyed on 10 June 1944, when 642 of its inhabitants, including men, women and children, were massacred by a German Waffen-SS troop, apparently as a reprisal for the shooting of two SS officers by the French Resistance. A new village was built after the war on a nearby site, but the original has been maintained as it was left, as a memorial to the martyrs. There are numerous vehicles, bikes and household furniture still among the rubble, all lying where they were that fateful day. The one thing that was particularly noticeable was the number of sewing machines in each house. The community must have been keen machinists.

I saw it in 2007 and I am glad that I have been there, but I have no wish to visit it again. Walking around the village, I almost felt sure the ghosts of the past were still there watching over the place.  I found it very spooky and deeply disturbing.

Here are a few photos I took when I visited it previously. This is one of the most famous views, with the remains of the Doctor's car in the foreground. 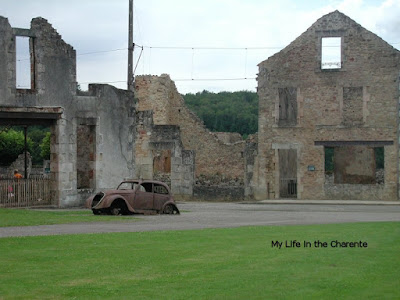 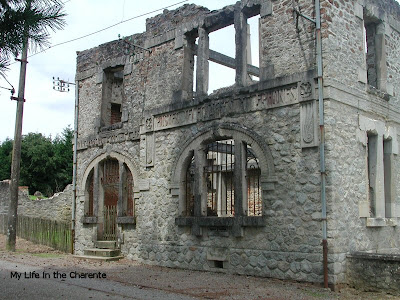 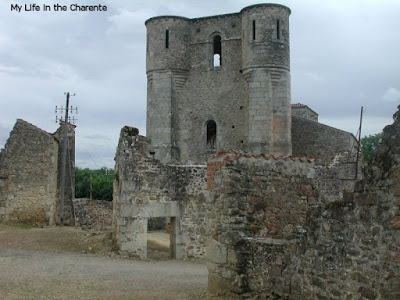 The Church.
Women and children were marched off to the Church and the children were encouraged to sing.  After they had left, the men were divided into 6 groups and led off to different barns under armed guard.  When the townspeople were all shut away, the SS began to kill them all. 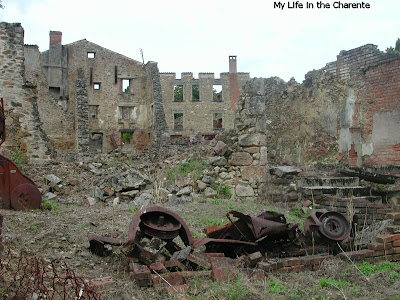 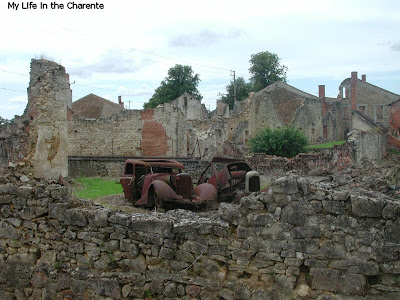 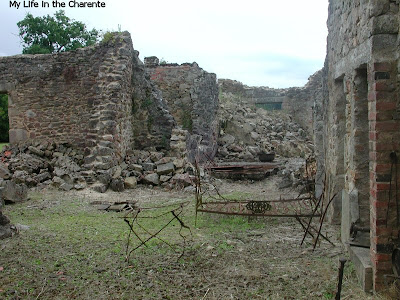 They will not be forgotten.
Posted by Diane at 17:15

Labels: Oradour-sur-Glane, Round and About