Tour de France.
09 July - stage 6 - Montargis - Gueugnon 227.5 km was much as expected and the overall standings did not change.
The stage win again went to Mark Cavendish, who, thanks in part to his team mate Renshaw who lead him up through the peloton to get to the front at the perfect point, 200 metres from the line; from there, Cavendish again out-sprinted the world's best. That ended the last opportunity for sprinters for a while; the next few days will comprise mountain stages with steep finishes suited to the "climbers".
10 July - stage 7 - Tournus - Station des Rousses 165.5 km.
This medium-altitude mountain terrain  of the Jura range near the French border was more difficult, because the climbs last for between 6 and 12 kilometres, starting after the 40 km mark. Thereafter, there was not even a single centimetre of flat road; it was up, down, up, down all the way to the finish - in very high temperatures.
The stage win and the yellow jersey is back with the Frenchman Sylvain Chavanel, who rides for the Belgian Quickstep team. He completed the 165.5 kms at an average speed of 37.8 kms/hour!!!! I can only do that down hill!!!!!!! He has also put himself in second place after another French rider Jérôme Pineau for the polka dot jersey – (King of the Mountains) - the climbers jersey.
There have been a few changes in the overall standings today as expected. Of the top riders, Cadel Evans of Australia has moved from third to second and Andy Schleck of Luxembourg from sixth to fourth (Andy  is also now the leader of the white jersey competition, taking it from Geraint Thomas of the Sky team, who had worn it from the start). Alberto Contador of Astana moved from ninth to sixth and his old team-mate Lance Armstrong  who now rides in the Radio Shack team, moves from eighteenth to fourteenth. Fabien Cancellara has lost the yellow jersey now that the route is more hilly. Cancellara is a powerful sprinter and time trial specialist, so he will be spending  a lot of time at the back over the next days!!
My blogs will now be “off the air” until at least 14 July, but I will catch up then with the TDF positions. The race only finishes 25 July so plenty of time for many changes!
I also have some interesting news about the ‘unknown’ white car in Blog 69 – watch this space.
13 July - Nigel arrives on Tuesday morning  and we will be celebrating Bastille Day in the evening. There is a ball in Chasseneuil which we will not go to, but there is always celebrating and music in the streets. This is followed by a huge fireworks display. After the ‘feu d’artifice’ there will be much celebrating until the early hours of the morning. We will return home to catch up with some sleep; Nigel has a very early flight!!
I am sure most of you will know the story of Bastille Day, but if not keep reading:- 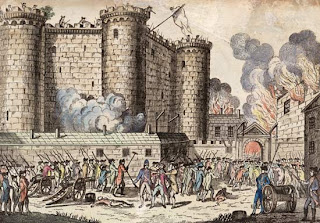 All of the planning had been done, all of the arrangements made, and all of the contingencies carefully thought out; everything was ready. As the morning of July 14th 1789 dawned, the mob gathered, heading for the thick, foreboding walls of the hated Bastille. Guarded by eighty-two aging veterans and reinforced by only thirty-two Swiss mercenaries, the besiegers, numbering near a thousand, felt that they could easily overwhelm the political prison. The defenders of the Bastille, not fearing the onslaught proposed by the attackers, spent the previous week repairing a long since damaged drawbridge, boarding windows, and reinforcing walls. They were not worried, expecting only a mob attack. However, three hundred French soldiers deserted their ranks to join in the attack. Had it not been for these soldiers, the Bastille would not have been taken. As it was, the besiegers quickly broke through the gates, and, despite the threat of 20,000 pounds of gunpower igniting, destroying everything in the violent explosion, won the fortified prison. 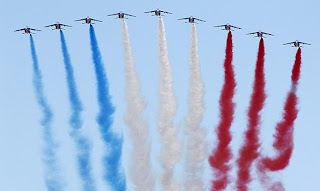 The storming, and subsequent take over of the Bastille, ushered in the beginning of the French Revolution. No longer were the angry peasants defying local lords, but they were now striking at the symbolic heart of the monarchy. The Bastille, a hated emblem of control and domination, became the war cry for hundreds of thousands of scorned and maltreated revolutionaries. However, the Bastille did not always ring with such discord as it did in the late seventeen hundreds.

Taken from the French word ‘bastide’, meaning fortress, the Bastille was constructed to defend the eastern wall of Paris from hostile forces in 1382. With walls over eighty feet high and a well stocked and supplied arsenal, the Bastille quickly gathered the reputation of one of France’s most secure military strongpoints. However, after being besieged seven times and surrendering on six of those times, the importance of the fortress diminished. By the early seventeen hundreds, it had become a prison.
Cardinal Richelieu, acting under the orders of King Louis XIII, imprisoned any displeasing character for any reason. Prisoners were arrested by a secret warrant issued by the King called a lettres-de-cachet. Not allowed a trial, told what their offense was, or even what their punishment was to be, these enemies of the King were quickly taken away and imprisoned in one of the many high towers of the Bastille. Famous prisoners include Voltaire, the famous political writer, and Marquis de Sade, a well-known French writer. The most famous and mysterious prisoner of the Bastille, is the legendary man in the iron mask. This character has had such a following that a book, written by Alexander Dumas, and a popular movie have been made depicting his life in the Bastille. However, neither one of these is an accurate retelling of the mysterious man’s life.
When prisoners were released from the walls of the Bastille, they were allowed to go only if they agreed never to tell what they had seen or what had happened inside the feared prison. This lack of knowledge about the Bastille helped to create a mystique of horror and terror that the King could use to coerce certain things out of people. However, the reality of the Bastille was much different from the mystique created by the King. All of the rooms, until the year 1701, were left unfurnished. Wealthy political prisoners were allowed to bring in their own furniture; many even brought their own servants with them. Meals were of generous proportions, and more luxurious meals could be bought, if the prisoner was wealthy enough. Most prisoners were docile. They were allowed to walk freely around the fortress, talk with officers and other prisoners and play games. Many had their own personal hobbies, and a few were even allowed to visit the city of Paris on parole. The Bastille was much more comfortable, even homelike, than the horrific rumors that circled around France proclaimed.
In 1789 when the angry mob broke through the walls and stormed the Bastille they found only seven prisoners inside: four forgers, two lunatics, and a young noble. However, it was not to free the prisoners inside that the battle was fought. Instead, it was to bring down the single most important symbol of the King’s power. The Governor of the Bastille, De Launay, had his head cut off and paraded around the streets of Paris on a pike. In the end eighty-three attackers were dead, and seventy-three injured. The guards only suffered one death and three wounded.
Since 1880, July 14th or Bastille Day, has been celebrated to commemorate the storming of the Bastille and the end of the French monarchy. As with the American Independence Day, the holiday is celebrated with firecrackers, parades, and festivals. In 1889, the Exposition, covering over 237 acres of land and consisted of over sixty thousand official exhibits, celebrated the official holiday. Featuring a reconstructed Bastille large enough for visitors to go inside for banquets and dramatic plays and a roller coaster, the festival was the largest of any in the world. Although Bastille Day is not celebrated to this extent anymore, it is still an important national holiday in France where the fallen are remembered, the courageous honored, and the heroic deified.
History credit : http://www.essortment.com/all/historyofbas_rffz.htm