Sorting out the heating - Blog 84

This has been a week for sorting out the heating, so all is ready for winter!  This may sound as if it is a bit early, but if we leave it  later, the oil price goes up in August when Americans get away by road on holiday, and availability of staff to do the servicing is also less.
The oil duly arrived on Monday and we topped up the tank; 1000 litres later……  Admittedly the price is a little less that it was two years ago, but it is still not cheap.  Thank goodness for David, (who looks after the house during winter); he is well aware of the costs and keeps the boiler on a frost setting during winter, switching it off when necessary.  He is also well aware that, when I arrive in at the beginning of spring, that I do not want to be cold!  The house walls are very thick and they take some heating up! He turns the heating up on the morning of my arrival, switches on the fridge and also does a quick whip - round with the vacuum cleaner.  I have said so many times that he is an absolute gem, and I still say it.  He in fact made  the phone calls for me, doing all the ordering for the services this week. I find French by phone more than a little difficult; I can’t wave my hands around and there is no time to check the dictionary!!!

The first picture here though, is last night’s sunset, which I thought was a pretty good one.  I have also been invited to join the blog, 'Beautiful World', which contains, surprisingly enough,  beautiful pictures from around the world.  To visit it just click on the link HERE. 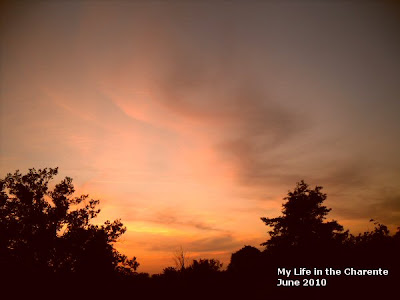 I loved the way the clouds looked so windswept and caught the colour. 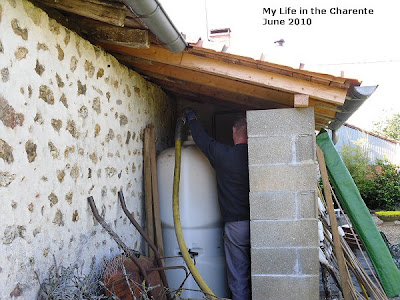 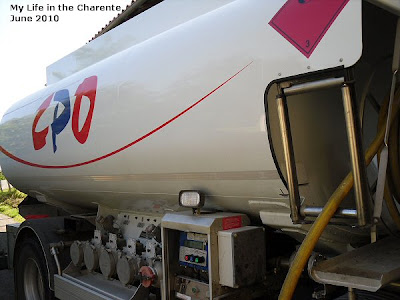 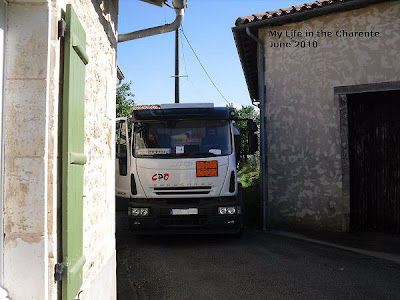 only just fits into our little road! 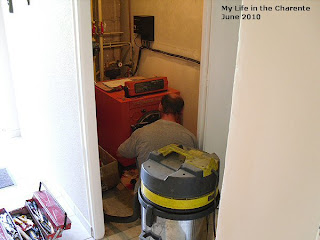 Servicing the large Viessman boiler which does all the work, heating and circulating the water though the radiators. I thought that there was a water leak at the back of the boiler; each time it ran, we ended up with a large puddle on the floor.  The mechanic found a hole in the  flue,  which fills with condensation.  As he  had nothing with him to solve the problem, he disappeared in his van for about 20 minutes and returned with some wide metallic tape.  Hey presto, problem solved, or I hope so :-)
Posted by Diane at 16:59